In Port: Guard Duty on a Navy Ship 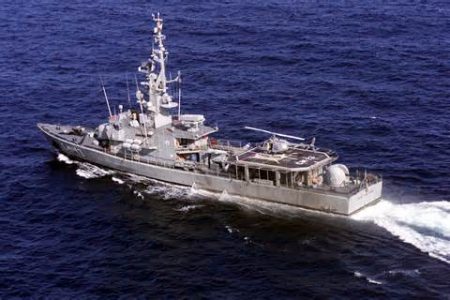 “And would you just be lookin’ at what the cat dragged in, it’s none other than the ‘Captain of the Guard,’ Corporal Hicks. Well, sir, allow me to give you an update. I see water to my right, left and in front of me; I see water everywhere. Offhand, Captain Corporal, I’d have to say ‘water.’”

“You know what, O’Toole, why does the Navy give the Marines a hard time?”

“I guess it’s because each and every Marine thinks they’re the only ones who can win any war, by themselves, is why. They never consider the backbreaking work it takes to get a ship loaded up with stores, fuel, ammunition; to safely navigate a ship around the world to delivery you guys at the exact spot and at the exact time you tell us to.

“On this-here ship we have a chow hall that we call the mess decks manned by guys who work 12 hours a day to feed you, to keep the tables, trays, silverware and deck clean, not to mention that every time they show up for work they have an inspection: fingernails and uniform clean.

“Up top we have a deck force that keeps the ship as free from rust as possible, the brass polished, the scuppers clean, and when it needs to be painted, they paint. Salt water, as if you didn’t know, attacks metals with a vengeance.

“Electricians keep the lights on and all the other numerous ratings keep everything in order. We have gunners, missile-men and radar men who keep us all safe as we travel dangerous waters. But a Marine has never thanked a sailor for a job well-done. Does that answer your question?”

“You’re on Guard Duty, sailor. You’re not on a soapbox, so can it. You guard this side of the ship and don’t worry about what doesn’t concern you.”

“So I’m not to worry about a bunch of ragheads attacking us from the other side, from the wharf side, is that it? Don’t answer; I got it covered. You made your rounds; I’m on post doing my sentry duty with gusto: see you in an hour, Captain of the Guard.”

“Getting back to our conversation:  you know, if you won the lottery, or, better yet, if I won.”

“You still on that? I told you: I’d buy a radio station in Israel and up the wattage to a million and play songs by women just to make the Muslims mad. I’d play songs like ‘I Am Woman’ by Helen Reddy; ‘You Don’t Own Me’ by Lesley Gore; ‘Girls Just Want to Have Fun’ by Cyndi Lauper; and ‘The Pill’ by Loretta Lynn.”

“Man, that would make them go bonkers, wouldn’t it, though? Here, I got one for you: ‘Respect’ by Aretha Franklin. Would you play that one?”

“You bet. Sure be fun to see the reaction. They’d probably try and jam the signal but with 40 million or so I guess I could plant an idea in some Muslim woman’s mind, you follow?”

“These Boots Are Made For Walking”