“IT IS A MORAL IMPERATIVE” 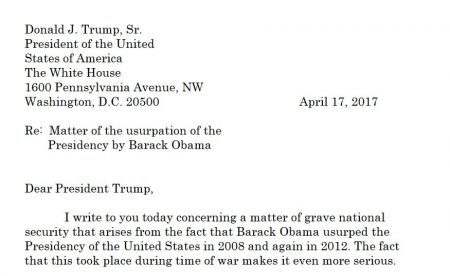 (Apr. 17, 2017) — On Monday morning, New York State citizen Robert Laity wrote a letter addressed to President Donald Trump  asking him to take action on an issue which Trump himself raised in early 2011 as he considered a run for the presidency the following year.

In January 2011, Trump, then a high-profile real estate mogul, began to demand that the White House release Obama’s detailed, or “long-form” birth certificate allegedly held by the Hawaii Department of Health (HDOH).  Since entering political life in 1995, Obama claimed he was born in Honolulu on August 4, 1961, although earlier and later versions of his biography state that he was born in Kenya or Indonesia.

Trump questioned whether or not Obama was eligible to the office based on his claim, without verifiable proof, of a birth in the United States.  At the same time, Trump released both his “short-form” and more detailed “long-form” birth certificates showing that he was born in Queens, NY on June 14, 1946.

On June 12, 2008, an image appeared at The Daily KOS and several other websites said to be Obama’s official birth certificate but lacking a registrar’s official seal and a signature. In May 2009, then-White House Press Secretary Robert Gibbs insisted that the image represented Obama’s “birth certificate” as he laughed off a question from WND’s Les Kinsolving as to why Obama did not release his “long-form” birth record.

Article II, Section 1, clause 5 of the U.S. Constitution requires the president to be a “natural born Citizen,” a term the Framers did not precisely define. While some contend that a birth on U.S. soil is sufficient to be “natural born,” others say that the designation indicates a higher level of citizenship and allegiance than simply the term “citizen.”  That view requires that the individual’s parents also have been U.S. citizens at the time of his birth in order to render him an eligible presidential candidate.

The phrase “or a Citizen of the United States, at the time of the Adoption of this Constitution,” is often called the “grandfather clause,” meaning that while the Framers knew that they themselves were not “natural born Citizens,” they were making an exception in favor of their eligibility so that the new nation would not have to wait 35 years for a child to be born to newly-minted U.S. citizens resulting from the American Revolution.

The final statement in the Declaration of Independence reads, “And for the support of this Declaration, with a firm reliance on the protection of Divine Providence, we mutually pledge to each other our Lives, our Fortunes, and our sacred Honor.”

The first to sign was John Hancock of Massachusetts.  All who signed knew that they could be arrested and hung for treason against the British Crown.

Trump was not the first to question Obama’s eligibility for the presidency.  After Obama announced his candidacy on February 10, 2007, many Americans questioned whether or not he is a “natural born Citizen” given the variations in his life story put forth by credible sources such as the AP and NPR which said he was born in Kenya.

On December 19, 2007, MSNBC’s Chris Matthews told his audience that Obama was “born in Indonesia.”

Citizen letters to congressmen, presidential electors, governors, attorneys general, judges, and district attorneys fell on deaf ears, and Obama was swept to victory in 2008 amid his message of “hope and change.”

Included in his campaign rhetoric was the promise to “fundamentally transform the United States of America.”

After approximately three months of pressure from Trump, on April 27, 2011, the White House released what it said was a scan of a certified copy of Obama’s original birth record from Hawaii at whitehouse.gov.  Within hours, however, the image was declared fraudulent by several experts who went on the record with their analyses. The White House made no response.

In early 2009, a citizen of Tennessee, LCDR Walter Francis Fitzpatrick, III (Ret), attempted to approach his local grand jury and a federal grand jury about Obama’s questionable eligibility and alleged treason but was spurned and incarcerated on multiple occasions. His initial petition to the Monroe County grand jury alleging by criminal complaint that Obama had usurped the presidency by “force of contrivance, concealment, conceit, dissembling, and deceit” was used as a basis to convict him of “aggravated perjury” in June 2014.

Fitzpatrick nearly died from an infection while in Tennessee state prisons between August 2014 and October 2016.

Laity and Fitzpatrick both received visits from the U.S. Secret Service as a result of their claims made against Obama.

In his letter to Trump, Laity asserted that “Barack Obama is not an Article II, Sec. 1 (USConst) ‘Natural Born Citizen’…You were correct all along.  Obama was NOT eligible to be President and never was the bona-fide President,” then referred Trump to his Constitution Day 2010 letter published at The Post & Email titled, “There is no President Obama.”

Over the course of a 5+-year criminal investigation into the long-form birth certificate image, the media ridiculed and scorned the messengers consisting of Maricopa County, AZ Sheriff Joseph Arpaio and his Cold Case Posse lead investigator, Mike Zullo.  The media continued its blackout when on December 15, 2016, Zullo revealed that two well-respected forensic analysts agreed that the long-form image could not possibly represent a real, paper document.

Zullo has said that the image was released to the public “with the intent to deceive” and that it constitutes “the foundational lie of this (Obama’s) presidency.”

Laity concluded his letter with “I trust that you will agree that this matter must be addressed. It is a moral imperative.  I await your response.”

Laity’s letter can be read in its entirety here:  Letter to President Donald J. Trump, Sr. regarding Barack Obama’s usurpation