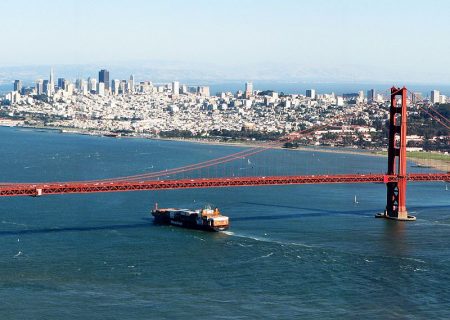 (Apr. 5, 2017) — “And just when we all thought there was no way that the city by the bay, San Francisco, couldn’t get any more nuttier; that there was no possible way that the people of that town could become even more unglued than they already are, they surprise us all and go so far over the edge that there’s no known method of retrieval in sight. I propose that we hereby declare the city of San Francisco an honorary suburb of Tehran and let it go at that.

“Hello, I’m your Roving Reporter and I’ll be your host for tonight’s episode of ‘Pulse of the Nation.’ Glad you could join us, ladies and gentlemen, on this most solemn occasion that marks the first (of perhaps many) cities to give up, cave in, and act like the little crybabies they are and accept Sharia Law as a foregone conclusion. Yes, you heard me: it seems that the chief of police fired one of his deputies for ‘anti-Muslim’ text messages.

“The following is a communiqué from downtown:

The City Hall of San Francisco is hereby authorizing the solicitation of bids for construction companies to build a gangplank atop the Transamerica Pyramid so as to deal with the city’s many undesirables.

And that’s my opening. Excuse me, sir; care to make a statement?”

“You bet your, well, yes but I’m afraid that I’ll, oh, the heck with it: horse hockey. And that’s all I’m going to say: horse hockey. Used to be a nice town and now look at it: bunch of loonies, I tell you. Horse hockey. I said it once and I’ll say it again: horse hockey.”

“Yes, well, you’re very articulate, if nothing else. Next, please. And you are?”

“I’m Anita and I can’t believe how stupid Californians are, can you?”

“Governor Jerry Brown; ‘The View’: need I say any more?”

“You got me there. Make the whole gosh-darn state a suburb of Tehran, for all that I care. Start the wall in Brownsville, Texas, and go all the way to California and then up along the California, Oregon and Washington border to Canada. The whole West Coast is one big asylum. I think that the radiation from the Fukushima nuclear reactor got to them, which is why they’ve all gone nuts. If they’re all as stupid as that police chief in San Francisco, they deserve whatever they dish up for themselves, but leave the rest of America out of it.”

“Good for you. And who is next in line?”

“I’m the new Assistant Pastor at your favorite church, the one on Hawthorn Street. I’m Pastor Tuck.”

“Of course you are. Pleased to meet you, we’re sure. Tell me, what about that sheriff firing one of his men for a so-called anti-Muslim text?”

“The sheriff is wrong. He’s acting as if he’s the stellar graduate of the public school system; I mean, he’s not using the brains that the Good Lord gave him. All he has to do is to think for himself  (no doubt for the first time in his life) and he’ll reach the truthful conclusion that Islam is, first and foremost, a political ideology with a wisp of a veneer of religious sacraments, the easier to control the mob.”

“Are your sermons as straightforward as your talk?”

“Precisely. I make no demarcation from the Lord’s Word and my speech.”

“Excellent: you’ll be seeing us Sunday, then.”

“Now there’s a sad case if there ever was one. I hope she finds salvation before St. Peter calls her. Her unending quest to become the Secretary of State has ended for sure, hasn’t it? First she sells her soul (along with her country) trying to push the video down our throats, the flimsy Benghazi excuse, and then she uses her power to break the law on finding something, anything, against Trump.

“You see, this whole secret, dark and anti-Constitutional government never figured on Hillary losing the election. They never even bothered to cover their nefarious tracks because, heck, if Hillary won who would be around to care, right?

“I hate to say it, but I’ve actually seen such behavior up front and in my face. In Vietnam people who lied would be fragged; I don’t necessarily mean murdered but injured enough to get them out of the way – back to the States — so as to protect patriotic Americans. Am I making any sense? I mean, you just don’t follow illegal orders, even from a General such as George Patton; got it?”

“Look, you can’t cross the line. Now this line is not made out of steel; the line is vaporous such that only the participants know exactly where the line is, but still… Look, we all know that Susan Rice isn’t the sharpest knife in the drawer, that she doesn’t have the cunning to pull off a stunt like this. We leave such antics to Obama and his boss, Valerie Jarrett, okay?

“But still, she did do their bidding, didn’t she? Jail time and the charge is none other than treason. Look, I don’t wish to appear rude, but I’ve got a train to catch. See you Sunday.”

“Goodbye, Friar, I mean, Pastor. Take care and, once again, the sound-boom girl is pointing to her watch, which can mean only one thing: we’ve run out of time. And so, on behalf of the crew, allow me to wish each and every one of you a goodnight: Goodnight.

“Good show, guys. Poor Susan Rice: sold out for nothing. Imagine selling your country down the river? All to get dirt on Trump so they could use it to push Hillary in. Didn’t quite work out the way they envisioned it, did it? No, the American people saw through the charade, this open border and migration lie: it’s a Muslim and Cinco de Mayo invasion, people. She needs to face justice. Hey, it’s burger time: my treat.”

“Sitting on the Dock of the Bay”