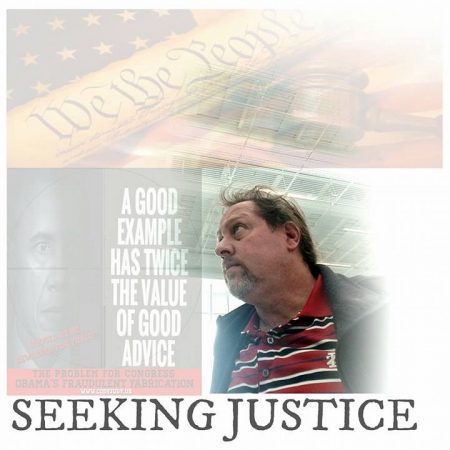 (Mar. 29, 2017) — On Tuesday, former Democrat presidential candidate Cody Robert Judy filed a Notice for Decision/Judgement in the U.S. District Court for the District of Utah noting that the 30-day period in which a response to his Motion for Reconsideration from the defendants was due.

“The Motion for Reconsideration was filed February 27, 2017 and had a 30-day time frame as a dispositive motion for the defendants to respond to. So the Court isn’t late; I just filed the Notice for a Decision on time, as today is the 28th of March,” Judy told The Post & Email on Tuesday.

In addition to 2016, Judy was a presidential candidate in 2008 and 2012 and therefore has presumed “standing” to challenge the qualifications of anyone seeking the same office.  In 2008, he challenged the eligibility of both Obama and Sen. John McCain on the basis that neither was a “natural born Citizen,” as Article II, Section 1, clause 5 of the U.S. Constitution requires.

Judy was not alone in challenging the 2008 major-party presidential nominees on the “eligibility” question.  McCain, born in Panama to two U.S. citizens in 1936, had faced questions in 2000, and a column published in The New York Times quoting citizenship experts declared him ineligible to run.  The article began: 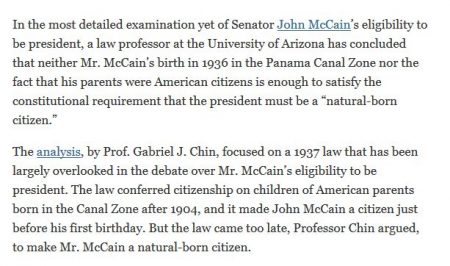 Wikipedia’s list of eligibility challenges and lawsuits against Obama omits Judy’s 2008 position as a presidential candidate.

However, credible reports that Obama, too, was born in a foreign country dating back several years prior to his presidential run were ignored by the media and dismissed en masse by the courts.

Obama claims a father who was never a U.S. citizen, which some constitutional scholars and attorneys believe is sufficient to disqualify him as a “natural born Citizen,” regardless of where he was born.

During the 2016 presidential campaign cycle, Republican primary contender Sen. Ted Cruz, born in Canada to a Cuban- and later Canadian-citizen father, insisted that he is a “natural born Citizen” based on his claim that his mother was a U.S. citizen when he was born.

Cruz provided no documentation of U.S. citizenship, whether through dual citizenship at birth or naturalization.

Although questions about Obama’s eligibility went unaddressed during the 2007-2008 campaign cycle, he was inaugurated on January 20, 2009 as the nation’s 44th president.

When in 2011 then-businessman Donald Trump gave a public voice to the concerns of Americans who questioned Obama’s “natural born” status, the White House responded approximately three months later by releasing what it said was a scan of a certified copy of Obama’s “long-form” birth certificate from the state of Hawaii.

Within hours, experts declared the image a poorly-created forgery.  In August 2011, then-Maricopa County Sheriff Joseph Arpaio asked former detective and then-Maricopa County Cold Case Posse leader Michael Zullo to spearhead an investigation of the image in order to assure Arpaio’s constituents that their votes would not be disenfranchised in the 2012 election.

Three days after meeting with other subject-matter experts, Zullo informed Arpaio that he could not declare the image authentic.  From there, a 5+-year investigation ensued, with Zullo and Arpaio holding three press conferences to inform the media, Congress, federal law enforcement, and the public that they determined the long-form birth certificate image to be a “computer-generated forgery.”

At the third and final presser on December 15, 2016, Zullo revealed that two forensic experts from different disciplines contracted to study the image had reached very similar conclusions as Zullo’s based on nine identified points of forgery achieved through electronic manipulation.

Judy’s case began in July 2014 in the same district and was assigned to Judge Bruce S. Jenkins, who voluntarily recused himself.  At that point, Judge Ted Stewart received the case, which claimed financial damages against the defendants for personal liability and injury under the Sherman Anti-Trust Act.

At the time, Judy told The Post & Email that the nature of the alleged violations allowed him “to take a criminal complaint directly to a judge, bypassing a federal grand jury and a prosecutor.”

Judy appealed the subsequent rulings against him to the U.S. Supreme Court, which refused to grant him in forma pauperis status in order to pursue the case in the fall of 2015.

Page 1 of the Notice for Decision/Judgement reads: The second page is a “Certificate of Mailing Affidavit.”

In an interview on Tuesday evening, Judy told The Post & Email:

I filed a motion to reopen the case after it was closed and after it had actually made a long-distance trip to the U.S. Supreme Court in case #14-9396.  Now I’ve come back around into the federal district court, which is where they all start.  I always feel that the best-case scenario is to deal with the federal judge assigned to the case rather than go on appeal.  “U.S. Supreme Court” all sounds good and everything, but you sure want the federal court to be on your side on appeal.

One of the stipulations for a Motion to Reopen a case is if there’s evidence that comes forth that was not available at the time you filed it.  That’s where Sheriff Joe’s December 15, 2016 press conference came in — the nine points of forgery — and the judge has that now.  That was the major reason I did it because it shows us what a legal, professional organization such as Sheriff Joe’s Cold Case Posse determined.  It’s not me bringing the evidence; it’s their discovery.  Sheriff Joe’s posse was actually just taking the reports from the two contracted forensic examiners.  All of their work I just brought to a judge, and I was able to do that through the Clayton Act and the Sherman Act.  Normally, you need an attorney general or a grand jury to bring a trust violation claim to a judge, but the two federal laws allow me to do that.

So I filed that, and the Motion to Reopen was denied, but it was denied about four days prior to the time limit of 30 days having expired.  So the court hopped on that denial before the time had expired for the defendants to respond.

Why would the court have done that?

It could have been a clerical error.  It could be that the judge just did not feel that there was any reason to allow the 30-day period to expire.  But I have used that as a legal point in the technical issue of why he should reconsider.

Is the same judge reviewing it?

When they denied the Motion to Reopen, the only thing I could think of that was missing was that I didn’t specifically mention the particular crime that was involved in the forgery of the long-form birth certificate as far as the criminal code.  So in my perception of really being “sticky” with the law, the judge could say that he’s not the one who enforces the criminal codes – that’s usually a prosecutor — but in this case, I am the prosecutor.  I have been very detailed in the Motion for Reconsideration in showing the judge that I knew the exact criminal code that was in violation and that it mentioned “birth certificate.” You can read that in the Motion for Reconsideration in my last blog post.  You can see the detailed federal criminal code which cites a fabricated birth certificate, driver’s license, or state ID (p. 7).

I showed the judge that I knew the law had been violated, that the criminal code would apply, and that I think I deserve relief because this code is violated.  Failing to state a claim on which relief can be granted is a big mistake.

What relief are you seeking?

The thing that I could compare this to is the O.J. Simpson case.  He was prosecuted criminally, and the jury did not find him guilty beyond the shadow of a doubt.  Then the family went in and prosecuted civilly, and the standard for guilt under a civil penalty is a little more lenient:  “reasonable doubt.”  They still mention the criminal code in that civil action; there still has to be a particular violation to the family.

Is there a clear line where “civil” ends and “criminal” begins?  Is that what’s happened with the Obama “eligibility” issue?

You have to have somebody with standing, and that gets into what most people believe:  that you had to be a candidate in the race, and that candidate has to stand up and say, “That other candidate is in violation of the rules of the race.”

If I were going to be faulted in the Motion to Reopen, it would be that I failed to exactly cite a criminal code on which the judge could base his decision.  What I had hoped for under the Sherman and Clayton Acts was that the judge would know the law and the criminal code and that he would say, “OK, because Cody doesn’t know that, we will assign a prosecutor or attorney general to look at the case and the prosecutor or attorney general would come up with the exact code.”

That’s what a judge is supposed to do when he sees a case where the Sherman and Clayton Acts are invoked.  A plaintiff can go to the judge, and the judge is responsible for sending it to the prosecutor.  What I have done in naming this specific crime is that I have the judge right in the square of the balance.  Basically, he becomes an accomplice to the crime if he refuses to name a prosecutor or grant the Order to Show Cause.

In the Order to Show Cause, I relayed to the judge that it’s not just about a big lump sum of money to bankrupt the Democrat Party.  I was willing to take a penalty over a period of time, so much a month, until it was paid off.  “Justice” is the part that I think all the people are missing.  My last blog piece detailed that in the title where ignoring justice is a path to failure.

Please look for the second half of our interview with Cody Robert Judy in the near future.