IF TRUE, IT WOULD NOT BE THE FIRST TIME 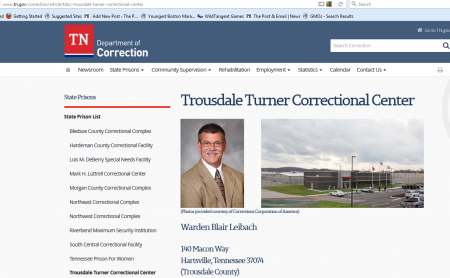 (Mar. 24, 2017) — In a letter received earlier this week, an inmate at the Trousdale Turner Correctional Center (TTCC) in Hartsville, TN alleges that he has been designated as a “worker” beginning in May of last year when that is not the case.

The Post & Email is not publishing the actual letter, even anonymously, so as to avoid retaliation.

“I not only had no knowledge of this I haven’t received any type of federal funding sense i arrived at this C.C.A, the eight months I’ve been here,” he wrote [sic].  His reference to “CCA” is to the former Corrections Corporation of America, which changed its name to CoreCivic in the fourth quarter of last year.

CoreCivic is a private prison and halfway-house operator, the largest in the United States.

“Is this not odd that the facility would falsify documentation…” he wrote, alleging that there are “thousands of inmates here at this jail” who are victims of a scheme on the part of the prison to falsely assign them to nonexistent jobs.

The lack of prison employment is a constant complaint among inmates at the facility. The inmate’s letter suggests that TTCC is exploiting the inmates “for the purpose of the federal funding.”

He stated that those enrolled in “ghost jobs,” a term used by previous inmates about the same complaint, are not employed, have not received wages, and are often in “23, 24 hour confinement,” a reference to the frequent lockdowns reported by dozens of inmates to this publication over the last ten months.

A similar situation was reported by Walter Francis Fitzpatrick, III beginning in early 2015 involving the Pro-Social Life Skills (PSLS) course at the Northwest Correctional Complex (NWCX) and other Tennessee facilities.  Although not a drug or alcohol abuser or distributor, Fitzpatrick reported that he was threatened with bodily harm were he to refuse to enroll in the class, which is intended to assist in the rehabilitation of prisoners convicted of drug and alcohol-related crimes.

Fitzpatrick refused to take part as a result of the fact that the workbook exercises require the student to admit to criminal behavior in order to change it.

Inmates from NWCX as other facilities, including TTCC, have reported the same phenomenon and that the prisons are reimbursed for every PSLS enrollee with federal taxpayer dollars.

The author of this week’s letter also related that during a recent outside audit, “staff had inmates painting walls, waxing floors, cleaning all hours of the night…” “It’s the only time that whole week it ran lunch,” he wrote.

One of TTCC inmates’ most frequent complaints is that meals are served to them in brown bags in their cells, without the customary ability to dine with other inmates in a cafeteria setting.  Portions and quality are reported to be considerably below those found in government-run Tennessee facilities, according to inmates’ accounts.

In another grievance, the inmate described food which he believes is served under “unsafe” conditions and temperatures. “Petitioner has been at this jail for eight months and only had fruit less than five times,” he reported.

He also reflected the previously-reported cancellation of a contract CoreCivic had maintained with private contractor G4S for its security personnel to act as TTCC correction officers given the extreme short-staffing.

Use of excessive force, inadequate medical care, insufficient staffing, gang violence, and unresponsiveness to inmate grievances have been constantly reported to The Post & Email since last spring, when a large influx of inmates arrived from other facilities. Many grievances and complaints have been filed, both from inmates and concerned relatives, but thus far, the Tennessee Department of Correction (TDOC), which provides oversight to the privately-operated prisons in the state, has maintained its public position that all is running smoothly.

CoreCivic has declined to respond to The Post & Email’s requests for comment by email, standard letter, or telephone.

In April 2013, falsification of records at a CoreCivic facility in Idaho was reported by the Associated Press and other sources.  A class-action suit brought by inmates describing dangerous conditions within the prison alleged that “CCA officials had falsified staffing records to conceal chronic understaffing. The prisoners claimed that fewer employees were on duty at the time of prisoner-on-prisoner assaults than the number reflected on shift logs.”

2 Responses to "Another TTCC Inmate Alleges Falsification of Records"