“JUDGE DOWNING, YOU ARE A CRIMINAL!” 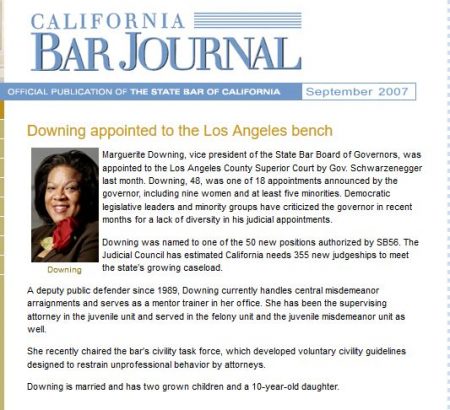 (Mar. 15, 2017) — On Tuesday, March 14, a hearing to determine whether or not the third child of a couple from Alabama should be designated for adoption by her California-resident grandparents was held at the Edelman Children’s Court in Monterey Park, CA.

The father of the child, Roosevelt Williams, told The Post & Email in an emotional interview following the hearing that when he asked Judge Marguerite Downing to demonstrate that the court held jurisdiction over his children given that he and his wife live in Alabama, she reportedly refused, proceeded to declare his parental rights terminated and the child placed on the path to adoption by Roosevelt’s wife’s parents.

Two elder Williams children were placed on the same trajectory some months ago in the same home, as their cases were opened earlier.

According to Roosevelt, Downing would not allow a social worker who Roosevelt wished to testify on his behalf to attend the hearing.  “She knows that if she let her in, there would be no case,” he told us, having previously told us that the same social worker admitted in a private conversation with him that she observed a healthy relationship between the three children and their parents, Roosevelt and Kanika.  “Those children love their parents,” Roosevelt told us the worker commented.

Roosevelt said that Downing’s ignoring of his question dealing with jurisdiction is unconstitutional, illegal, and “criminal.”  “I told her right to her face, ‘Judge Downing, you are a criminal!'” he told us on Tuesday following the hearing.

He said that as a black man, unlike those who abandon their children, he wishes to take responsibility for his children but has been deprived of the opportunity by a corrupt system which removed them without any evidence of abuse or neglect.  He and his wife, Kanika, have not seen their children for nearly a year.

“It’s not white people doing this to us; it’s our own,” he said, referring to Downing, who is black.

In November, Downing ran unopposed for “Office 80” within the Superior Court of Los Angeles.  She was originally appointed to the bench by then-Gov. Arnold Schwarzenegger.  According to Ballotpedia, she earns $181,292 annually.

The reported removal of children from fit parents is not a new phenomenon in Los Angeles, initiated by the Department of Children and Family Services (DCFS).  Examples of parents who have described having their children confiscated without evidence of abuse or neglect include Laura Lynn, Michelle Robinson*, Lisa Castillo, Rafaelina Duval, and Jeffrey and Erica Henderson.

Atty. Shawn McMillan, who won a $3.1 million award from a jury for Duval’s pain and suffering after DCFS took her child without a warrant, affirmed in a recent interview with Tami Stefano of the National Child Safe radio show that child-protective agencies are “stealing kids.“

Regarding the Duval case, McMillan said, “…all 12 jurors agreed that the County of Los Angeles, as a matter of custodian practice, regularly snatches children from their parents [illegally] without a warrant when there is no emergency. So, yeah, it happens every day!”

On the website medicalkidnap.com, cases alleging the improper seizure of children from their parents are listed in South Dakota, Kansas, Alabama, and South Carolina, resulting in serious harm and death, respectively.

*The mother is using a pseudonym for the protection of her children’s privacy.