“MERELY MORE OF THE SAME” 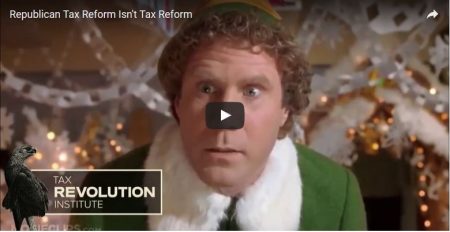 (Mar. 14, 2017) — On February 24, the chairman of the House Ways and Means Committee, Rep. Kevin Brady (R-TX), addressed the attendees of the Conservative Political Action Conference (CPAC) to provide his vision for Republican “tax reform.”

The Tax Revolution Institute’s Dan Johnson, however, wasn’t impressed. In this video, TRI’s executive director provides his rebuttal to Brady’s plan, noting the various empty promises that many Republicans made during the last election. While Brady is quick to point the finger at President Obama for the government’s failure to reform the tax code over the last eight years, Johnson explains how the Republicans’ plan amounts to little more than rearranging the deck chairs on the Titanic.

Johnson details what “revenue-neutral tax reform” actually means for the American people, the consequences of a “border adjustment tax” for consumers, and why Brady’s “better way” is merely more of the same that we’ve come to expect from Washington.

The 5 Things Republicans Don’t Want You to Know About Their Tax Reform added on Tuesday, March 14, 2017