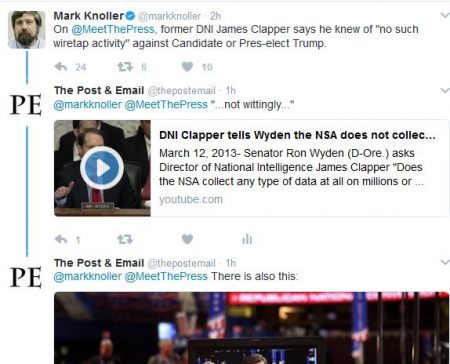 (Mar. 5, 2017) — Following Donald Trump’s allegations of his office at Trump Tower having been wiretapped by the Obama regime shortly before the November elections, the mainstream media is visibly pushing back with statements from former Obama officials, including former Director of National Intelligence (DNI) James Clapper, to the contrary.

When answering questions of the Senate Intelligence Committee in March 2013 regarding surveillance of American citizens by the U.S. intelligence community, Clapper told Sen. Ron Wyden (D-OR) that the communications of U.S. citizens were “not wittingly” collected.  His claim was belied three months later by the revelations of former NSA contractor Edward Snowden, who provided documents to The Guardian about the PRISM program and other means used to collect virtually all of the emails and telephone metadata on U.S. citizens not suspected of terrorist or criminal activity.

In November, U.S. News & World Report characterized Clapper’s testimony to the Senate committee as “admittedly false,” with some in Congress calling for Clapper’s prosecution.

On Sunday morning, the front page of Yahoo! News contained more articles about alleged ties between the Trump administration and Russia than about Trump’s allegations that his office was wiretapped by a former president’s administration.

However, James Hanson of the Center for Security Policy and Cathy Areu, who formerly worked in the Bush administration as an advisor, allege, from different points of view, that the wiretapping did take place.

On Saturday morning, Hanson told the three co-anchors of Fox & Friends that there was no doubt the wiretapping occurred and that questions remain as to how and for what purpose a warrant was issued by the FISA court.

On Saturday night, Areu described a source within the former Obama administration with alleged knowledge of the wiretapping who reportedly told Areu that the White House was aware of it.

Lt. Col. Tony Shaffer (Ret.) told the three that if the wiretapping claim is true, it is “Soviet-level wrongdoing.”  “It’s very likely that he did authorize this,” Shaffer said of Obama.

Fox’s Ed Henry then referenced a January 19, 2017 New York Times article which referenced unnamed U.S. government officials alleging that in regard to the Trump campaign, “One official said intelligence reports based on some of the wiretapped communications had been provided to the White House.”

Shaffer said he believes there is “no doubt” that Trump has gradually acquired more knowledge of the capabilities of U.S. intelligence agencies since his inauguration which has led Trump to make the accusations.

On Twitter on Sunday, CBS News White House correspondent Mark Knoller tweeted a statement from Clapper apparently denying knowledge of the alleged wiretapping on NBC’s “Meet the Press.”  On Saturday, Knoller did not appear to report Trump’s allegations but tweeted a response from former national security adviser Ben Rhodes echoing current Obama spokesman Kevin Lewis’s statement that the White House did not order the wiretapping and calling Trump a “liar.”

Knoller also tweeted that White House Press Secretary Sean Spicer “says there’ll be no further comment on Pres Trump’s surveillance allegations by him or the WH,” which omitted the remainder of Spicer’s Sunday morning statement that “Neither the White House nor the President will comment further until such oversight is conducted,” referring to a requested investigation by the “congressional intelligence committees.”

Knoller did, however, post the full statement issued by Spicer.

Neither Knoller nor any of his colleagues appear to have acknowledged the claims made by their former colleague, Sharyl Attkisson, who reported in 2013 that her home and work computers, cellular telephone, home telephone system, cable TV, and home security system were breached in what her privately-hired forensics analysts said was a sophisticated government operation.

CBS analysts also confirmed the breaches, although they would not say who they believed was responsible.

In a tweet on Saturday morning following Trump’s allegations, Attkisson stated that years later, she still has not been provided the full FBI file she is convinced exists on her.

The Foreign Intelligence Surveillance Act (FISA) of 1978 refers to “the President” several times as having the ability to “authorize the Attorney General to approve applications for electronic surveillance for foreign intelligence information…” (p. 8):

HR 6305, which became law passed by the 110th Congress in 2008, amended the Foreign Intelligence Surveillance Act (FISA) of 1978 to “add a new title concerning additional procedures for acquiring the communications of certain persons outside the United States.”

Authorizes the Attorney General (AG) and Director of National Intelligence (DNI) to jointly authorize, for periods up to one year, the targeting (electronic surveillance) of persons located outside the United States in order to acquire foreign intelligence information, under specified limitations, including: (1) prohibiting an acquisition intentionally targeting a person reasonably believed to be outside the United States in order to acquire the communications of a specific person reasonably believed to be inside the United States; and (2) requiring the targeting to be conducted in a manner consistent with the fourth amendment to the Constitution. Requires: (1) certain targeting and minimization procedures to be followed; (2) the AG to adopt guidelines to ensure that such limitations and procedures are followed; (3) the AG to submit such guidelines to the congressional intelligence and judiciary committees and the Foreign Intelligence Surveillance Court (Court) for review; and (4) prior to such targeting, a certification by the AG and DNI as to the necessity of such targeting and that appropriate procedures and limitations will be followed. Allows the AG and DNI, if immediate targeting is determined to be required due to an emergency situation, to commence such targeting, but to submit the certification within seven days of such determination. Requires all certifications to be submitted to the Court for review.

Authorizes the AG and DNI to direct an electronic communication service provider to: (1) immediately provide the government with all information, facilities, and assistance necessary to accomplish an acquisition; and (2) maintain under security procedures any records concerning such acquisition. Outlines legal procedures with respect to directive challenges, standards for review, enforcement, and appeals. Provides for: (1) judicial review of certifications and targeting and minimization procedures; and (2) review of Court rulings by the Foreign Intelligence Surveillance Court of Review (with certiorari to the Supreme Court). Outlines conditions under which the AG and DNI may, through the Court: (1) replace a targeting acquisition already in effect before the enactment of this Act with an acquisition authorized under this Act; or (2) reauthorize a current acquisition under the procedures and guidelines of this Act. Requires Court maintenance and security of records and proceedings with respect to acquisition applications, orders, appeals, and determinations.

How many in the mainstream media have presented this information to the public?