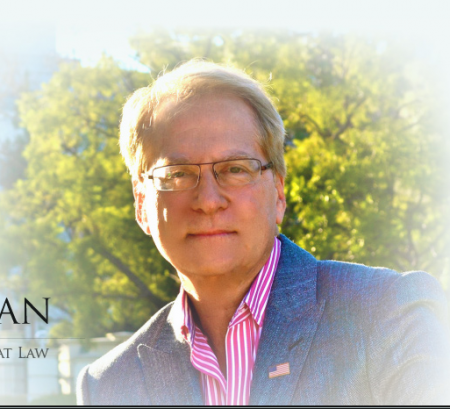 (Mar. 2, 2017) — As reported by Newsmax, on February 15, former federal prosecutor and founder of Judicial Watch and Freedom Watch Larry Klayman appeared on the Fox Business Channel with Dierdre Bolton to discuss allegations made by one of his clients that U.S. intelligence agencies have been collecting the personal information of judges, prominent businessmen and others in a “criminal violation of the Constitution and various related statutory laws.”

According to Klayman, his client, former NSA and CIA contractor Dennis Montgomery, alleged in November 2015 to the FBI that then-Director of National Intelligence James Clapper and CIA Director John Brennan had unlawfully ordered data collection on private citizens.

Montgomery was given immunity by the FBI for production and testimony in an agreement reached through Klayman’s representation.

Klayman’s interview with Bolton occurred in the wake of the resignation of Trump National Security Advisor Lt. Gen. Michael T. Flynn on February 13 which was reportedly requested by the president after details of Flynn’s conversations with Russian officials prior to the change in administrations were leaked to the press.  The New York Times and The Washington Post reported that Flynn’s characterization of those communications to Vice President Mike Pence were inaccurate.

Initially Flynn denied having discussed the subject of “sanctions” imposed on Russia by the Obama administration purportedly for its alleged part in tampering with the U.S. elections but was forced to admit that the topic arose in his resignation letter issued late on February 13.

The Trump administration said it will seek to identity those within the intelligence community who recorded Flynn’s conversations in late December while he was still a private citizen.  At a joint press conference with Israeli Prime Minister Benjamin Netanyahu on February 15, Trump described the leaks as “criminal acts” and maintained that Flynn was “treated very, very unfairly” by the press.

Also on February 15, House Intelligence Committee Chairman Devin Nunes said that he was “pretty sure” that the FBI  did not have a warrant to record Flynn’s telephone calls.  Nunes explained that “a process” exists when a foreign official is being monitored by U.S. intelligence agencies and in the process finds that a U.S. citizen is participating in the communication.

Referring to Flynn, Klayman told Bolton that “it is not believable” that intelligence operatives “caught him in a net with the Russians.”  “It is likely that they’ve been tapping the president’s phone…tapping everybody in the White House,” he said.

As Klayman recounted to Bolton, in December 2013, he prevailed in a landmark federal lawsuit challenging the NSA and CIA’s ability to obtain the phone records of average Americans not suspected of criminal activity without a warrant.

Klayman believes that the Trump administration, and its predecessor as a transition team, is being wiretapped in violation of U.S. District Court Judge Richard Leon’s order that such surveillance is a violation of citizens’ Fourth Amendment rights.

Within several months of the issuance of Leon’s opinion, the U.S. Congress passed a law to replace the U.S. Patriot Act, whose provisions had allowed the data collection under certain circumstances.

“These people are hostile,” Klayman told Bolton, referring to intelligence employees loyal to the Obama administration.  As an example, he invoked the negative opinion expressed by Obama’s CIA Director, John Brennan, on January 21 about Trump’s meeting with members of the intelligence community earlier that day, Trump’s first full day in office.

On January 4, Klayman characterized Brennan’s claims that Russia “hacked” the November 2016 U.S. elections as “hypocritical” in the wake of Brennan’s alleged involvement in spying on U.S. citizens.

On February 14, Klayman wrote in a column that he planned to approach Leon again “to hold the NSA and CIA in contempt for continuing its apparently illegal spying which threatens all of us,” including the President of the United States.

“You’ve got a sword of Damocles hanging over the president’s head.  How can he do business?  How can he represent the interests of the American people when he knows that the NSA is likely wiretapping everything he says to foreign leaders and everyone else?” Klayman asked rhetorically.

Klayman told Bolton that about 18 months ago, Montgomery provided approximately 600 million pages of documentation to the FBI associated with the alleged spying by the CIA and NSA, after which he received the two immunity agreements.

“Montgomery will testify that these agencies have been harvesting the confidential information of the Supreme Court Chief Justice Roberts, other chief justices, 156 judges, Donald Trump himself, and Yours Truly back in 2007,” Klayman said.  “Now this is extremely dangerous because it could be used to blackmail people.”

During an interview with Rose Tennent of the “RoseUnplugged” show during the CPAC conference last week, Klayman named U.S. District Court for the District of Washington, DC Judge Royce C. Lamberth as a victim of the government data-harvesting (begins at approximately 6:15 here).

Klayman said that FBI agents Walter Giardino and William Barnett were involved in taking Montgomery’s report of alleged wrongdoing on the part of the intelligence agencies.

In November 2013, Montgomery approached Arpaio claiming to possess documentation demonstrating that 150,000 or more Maricopa County residents had had their bank account information breached by government agencies.  Arpaio then met with Montgomery privately and decided to hire him as a confidential informant.

At a hearing in April 2015, Snow ordered all of Montgomery’s work product collected and turned over to the monitor he had appointed to oversee aspects of the sheriff’s office, effectively halting the investigation in which Montgomery played a pivotal part.

In August 2011, Arpaio appointed former detective Mike Zullo to investigate claims that the long-form birth certificate image posted on the White House website several months earlier was a forgery.  Although two press conferences were given in 2012, Zullo’s investigation remained ongoing and eventually intersected with Montgomery’s work for Arpaio, with Montgomery performing a forensic analysis of the birth certificate image.

In November 2015, attorneys representing the plaintiffs in Melendres subpoenaed Zullo to testify as to the nature of Montgomery’s work for the Maricopa County Sheriff’s Office (MCSO). Although denied legal representation by the county and initially invoking his Fifth Amendment right not to incriminate himself, Zullo later decided to answer questions which revealed that Snow himself was reported by Montgomery to be one of the victims of the government data breaches.

Neither the local media nor Snow appeared curious as to how the breaches occurred or the nature of the information which was allegedly stolen.

In response to Klayman’s appearance on Fox Business, Zullo told The Post & Email, “Montgomery’s claims are now manifesting themselves in regard to Trump. The stakes rose very high against Arpaio once it was realized we had information from Montgomery.  Then there was a full-court press against Arpaio.”

“Klayman was introduced to Montgomery through me,” Zullo continued.  “Montgomery was always saying that the government was monitoring civilians.  Investigators also learned that this monitoring was being done in the absence of FISA court approval or obtaining wiretap authority from any federal court.”

Government Spying: How High Does it Go? added on Thursday, March 2, 2017

4 Responses to "Government Spying: How High Does it Go?"