“YOU ARE THE FUTURE” 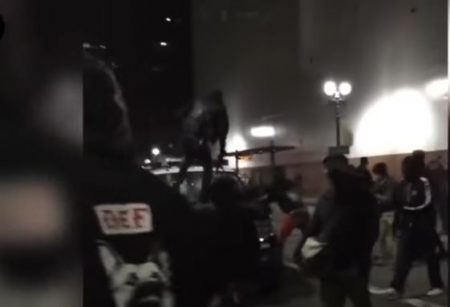 (Feb. 22, 2017) — Clearly, we have let you down… Based upon what we see you doing in our streets today, we have not brought you up properly. We should have given you far less things and far more time as you were growing up. If we had known this is what you would do on the college campus, we would have put your tuition in our retirement account and sent you to work after high school.

I could keep going with the list, but if you don’t get it by now, what would be the point? Everything in your world is backwards.

Yes, we have failed you! We tried to give you everything we never had… and we may have ruined you for life by doing that. We are sorry…

It could be our fault that you are twisted inside-out and upside-down on nearly every thought you have in the course of a day. We thought we were sending you through higher education, only to find out that it was heavy indoctrination – leaving you incapable of passing a 3rd grade vocabulary test or 5th grade history exam, even with your fancy degree on the wall.

I’m afraid we are a bit late. The nonsense that was drummed into you by the commune while we were busy working to keep a roof over your head seems nearly impossible to flush out of your system at this point.

You could be America’s first lost generation… an entire generation that simply must be written off as unreachable – unfixable – gone. New World views are now so deep-seeded in your psyche that we simply don’t know how to help you at this late date.

People who think they know everything can’t learn anything. We are trying to reach you, but so far, without much success. We knock, no one answers…

Maybe we should begin with baby-steps – treat it like a twelve-step detox program. Something basic, like simple vocabulary lessons.

Let’s try the word “fascism,” since your generation likes throwing that word around so freely, with clearly no clue at all what the word actually means…

Let’s just start here, can we?

Clearly, the true meaning of the term “fascism” is opposite your use of the term today. Maybe once you know what the word actually means, you will stop using it incorrectly, as an attack against every American who believes in the foundations of freedom and liberty, which unfortunately, protects even your right to be wrong.

I’m not ready to give up on your yet…

This is simply too important to just throw in the towel on your whole generation.

If you were able to read this far without passing out or going into hysteria, take a moment to write me. If we can’t talk to each other, learn from each other, then we will end up battling each other. That’s not the life we want for you.

We need YOU to make America great again… We are the past, you are the future. You must get it right, not for us, but for yourselves. Write me at jb.uspu@gmail.com