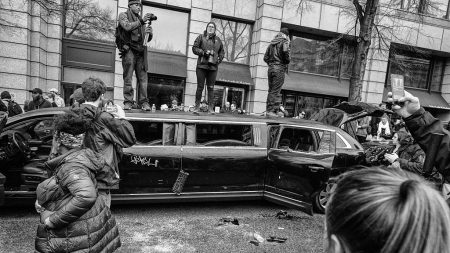 (Feb. 22, 2017) — Unprecedented.  The juvenile reaction of the Left and previously “normal” – as much as they can be – Democrats to the election of Donald Trump is beyond hypocritical.  A screaming kindergartner in the midst of an afternoon pre-naptime tantrum because he/she has been denied the piece of candy he/she wants … no…, deserves…, exhibits more class and decorum than the leftists “protesting” Trump’s election.  The word “protesting” is in quotes to differentiate it from that which it actually is: adolescent sour grapes.

The Nation has not seen this species of hatred since the Civil War.  And now, California wants to secede?  Really?  Nor have we seen the level of mendacious hypocrisy being exhibited from the halls of Congress to the editorial pages of Pravda on the Hudson (also known as “the entire newspaper”) to the campus of that bastion of free speech, Berkeley.  Pitiful.

Is it just me, or am I the only one who cannot recall rioting in the streets, the trashing of property and obscenity-laced tirades of university “professors” (caution: blunt, extremely unscholarly language here: https://www.youtube.com/watch?v=rB_eSl9zslQ) when the recently evicted, purported Honolulu-born usurper of the White House was first elected?  Yikes.

Did I miss all of those “Barry Soetoro Ain’t My President” marches?  Was I in a Rip van Winkle slumber when holdover civil servants from prior administrations colluded with others to supposedly form a “Deep State” seditious cabal intent on hobbling the Nation’s first “non-Anglo” president?

The truth is that the Leftists, the Democrats, the mainstream media, the Hollywood glitteratzi and on… and on… have no one… repeat, no one to blame for the election of Donald Trump other than themselves.  By undermining and sabotaging the candidacies of everyone but Hillary Clinton – then lying to cover it up – they sealed their own fate.

And it serves them right.  If the defeat of their sorry, deceitful and pathetic candidate proved one thing, it is this: the Founding Fathers knew exactly what they were doing when they created the Electoral College. The only thing sweeter than the election of Donald Trump is the humiliation of the losers, from Hillary Clinton on down to academics who know well how to vomit obscenities (they must practice a lot on their sabbaticals), but who lack the intellectual capacity to grasp that which the usurper hectored conservatives upon in 2008: elections… have… consequences.

And the rumors that all who voted for Clinton will be required by the Trump Administration to have a large capital “L” tattooed on their foreheads have not been substantiated.  However, there is a strong suspicion that the story is “fake news,” unless, of course, Pravda on the Hudson sees value in propagating the rumor to further inflame already incandescent Clintonites.

Guess what.  Conservatives were just as angry that Mr. Soetoro won the 2008 election, but they bit their conservative lips and went back to work.  And as history shows, they had good reason to be angry.  The usurper hobbled more than a few future generations with more unfunded debt than all of his predecessors combined; he presided over the seizure and federalization (unconstitutionally, of course) of one-sixth of the nation’s economy, calling the effort the “Affordable Care Act;” he knee-capped our military while lubricating the mechanisms to allow hundreds of thousands, if not millions of illegal aliens to invade the country, virtually without consequence; he bowed down to and appeased leaders of nations who chant, among other things, “Death to America.” I could go on, but you get the point.

Stated otherwise, if Donald Trump is bad, the usurper-in-chief who preceded him was cataclysmic… we just don’t know it yet.  And if Bill’s Bride (rumor has it that he still calls her that, although the honeymoon is long over) had been elected, we would have been (here, insert a university professor’s earthy comment).

As long as uninformed n’er-do-wells, inarticulate academics and intellectually-crippled actors and actresses continue with their adolescent tantrums, their sycophantic enablers – the mainstream media, deep-pocket Leftists and an occasional Congressional Research Service employee – will only embolden them.  Both groups are populated by fools.  Remember: elections… have… consequences.

One Response to "Adolescent Sour Grapes"