(Feb. 12, 2017) — An inmate at the Trousdale Turner Correctional Complex (TTCC) in Hartsville, TN has filed a complaint similar to that made by Walter Francis Fitzpatrick, III almost two years ago when he was forced into the Pro-Social Life Skills (PSLS) class at Northwest Correctional Complex (NWCX).

PSLS is intended for inmates who have abused and/or sold drugs and/or alcohol leading to crimes resulting in their incarceration.

In August 2014, Fitzpatrick was sentenced to three years in state prison for convictions on “aggravated perjury” and “extortion” after he submitted a number of sworn affidavits requesting an audience before the McMinn County, TN grand jury.  He has never been connected with substance abuse or crimes related thereto.

Both Fitzpatrick and the TTCC inmate link their enrollment in the course to “federal funding” which the facilities receive for each class participant.

At the time, Fitzpatrick reported being physically intimidated by PSLS instructor Terry Hopper and threatened with a beating were he to continue to refuse to participate in the class.  His objection was based on the fact that in the workbook exercises, the inmate is obligated to admit “criminal lifestyles” and “criminal behavior.”

The Post & Email has acquired copies of the workbooks used for the Pro-Social Life Skills course, and, although they are not reproducible due to copyright, has noted that questions asked of students include listing sources and causes of aberrant behavior.

Fitzpatrick did not relent and was eventually placed instead in Adult Basic Education (ABE) despite possessing a high school diploma, bachelor’s degree and a master’s degree as well as 20 years in the U.S. Navy with executive experience.

After continuing to report “bilking” of the federal treasury to The Post & Email by his and others’ placement in both classes, Fitzpatrick was abruptly dismissed from ABE without explanation.

Fitzpatrick reported that inmates in need of ABE were at times placed in PSLS.  His allegations of physical intimidation were reported to one of Fitzpatrick’s state legislators, Rep. John Forgety, who responded with a forwarded email from the TDOC stating that “there is no evidence to support the allegation.”

NWCX inmate Jerome Johnson refused to participate in the class and was issued a “Class A writeup.”

A letter from Fitzpatrick published in an article dated July 6, 2015 states:

Authorities here at NWCX are in a panic news of their federal funds ripoff is out in public.

Correctional officers, as I reported–are coming through my paperwork frantically searching for their names in your print articles.

I mentioned before Correctional Officer Dorton (first name not known… yet), in a statement he made to me during his interrogation during my cell shakedown using the word “incriminating” referring (I thought then) to paperwork Dorton was accusing me of concealing.

I reacted as sternly as was prudent–but effectively–I was insulted taking great offense to his suggesting I had hidden fruits of a crime I’d committed.  I thought Dorton was shakeing me down (with Corporal Spillers and CO Jenkins) to find written work product incriminating me.

Rencent news reports on told about narrate an FBI nationwide raid on medical care providers caught bilking federally backed to Medicade and Medicare programs.  Arrests of hundreds of nurses, doctors and other health care professionals for billing the federal government for services not rendered, or double billing or over billing.

TDOC authorities, as evidenced here at NWCX, use the same fraudulent financial schemes to steal federal funds by way of the Pro Social Life Skills and Therapeudic Community programs.

On January 27, 2017, the TTCC inmate wrote to Tennessee Department of Correction (TDOC) Commissioner Tony Parker to report that “Warden Blair Leibach, Core Civics [sic] and Jobs Coordinator Darlene Pendleton are engaging in fraud under TDOC Policy No. 513.04.01 (Transitional Assessment Plan-Behavioral Intervention Goals (TAP-BIG)).” Although not located at the TDOC’s website under “Policies and Procedures,” Section 513.04.01 is referenced in other policy sections as defining eligible inmates as “parole mandated” or who have a “documented need” for classes.

“I am not eligible for such programming because I am sentenced at 100%,” the inmate wrote in the letter, meaning that he is ineligible for parole.  “This means I am not required to take, nor eligible for under current statutes, Pro-Social Life Skills,” he wrote to Parker.  “When this happened at TCIX under Schofield, I attacked your federal funding and guess what? All of a sudden TDOC officials determined I was not eligible for TAP/BIG programming.”

As with Fitzpatrick, the TTCC inmate stated that those eligible for PSLS are often denied placement.  “The reason you people put me in it is so you can get the funding and keep the inmate and/or convict,” he wrote.  “I am requesting you stop this fraudulent act and start complying with state law and federal funding requirements.  If you don’t have me removed from the PSLS I will seek to have your federal funding discontinued.  Everyone that refuses to comply with state law should be criminally charged.” 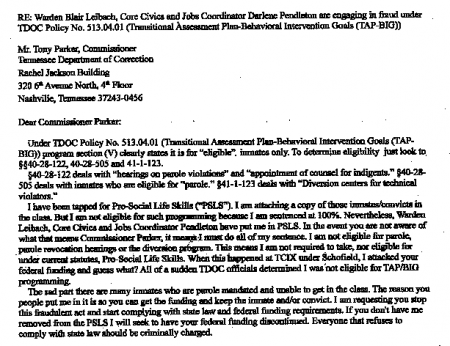