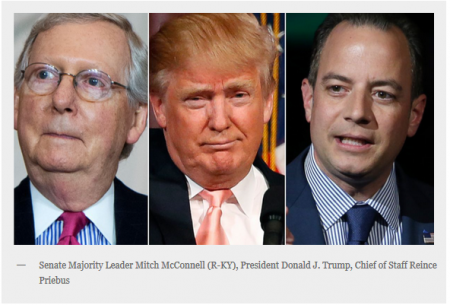 WASHINGTON, DC  –  Shortly after viewing the Inaugural Parade, and before going dancing at the Inaugural Balls,  President Donald J. Trump walked  into the Oval Office and approved the following Memorandum presented to him by White House Chief of Staff Reince Priebus.   The Memorandum.  most likely,  kills the Federal Regulation (Rule) to remove the “Pads and Chains” from “Big Lick” Tennessee Walking Horses which was set to be published in The Federal Register on Tuesday,  January 24, 2017.

Inside politics seem to be at play here.   U. S. Senate Majority Leader Mitch McConnell (R-KY) has received over $750,000.00 in “Big Lick” Animal Cruelty money since 1988.   His wife,  Elaine Chou, was chosen by President Trump to be Secretary of Transportation.  Today,  Senator McConnell offered the toast to President Trump at the Congressional dinner following his taking the Oath of Office.