WHERE IS THE PRESS ON THE FORGERIES? 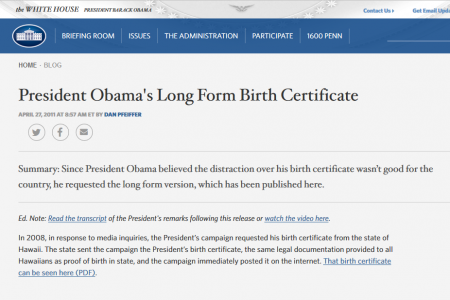 (Jan. 19, 2017) — In a recap of Obama’s last press availability as White House occupant on Wednesday, the Associated Press reported that during the Obama years, President-Elect Donald Trump was “the chief promoter of the lie that the president was born outside the United States.”

But that was not what Trump did.

In early 2011, considering a run for the presidency himself, Trump raised the question as to why Obama had not released a more detailed birth certificate than the “short-form” Certification of Life Birth posted on several websites in June 2008.

At the time, the short-form was said to be the only type of birth record available from the Hawaii Department of Health (HDOH).  Shortly after it was published by The Daily KOS and at Obama’s campaign website, FighttheSmears.com, the short-form birth certificate was denounced as a forgery by several analysts.

Trump did not focus on where Obama was born, but rather, called upon Obama to release the document which would prove where Obama himself claimed he was born.  In an interview on March 30, 2011 with Fox News’s Bill O’Reilly, Trump said, “if you are going to be president of the United States you have to be born in this country. And there is a doubt as to whether or not he was born…”

In response to O’Reilly’s question, “Do you think it’s an important subject?” Trump said:

In January of that year, prior to Trump’s public demand for Obama to release his long-form birth certificate, the newly-elected and sworn Hawaii Gov. Neil Abercrombie promised to locate Obama’s original birth certificate in an effort to avoid any challenges which might arise for the upcoming 2012 presidential election but within days said he was unable to produce it.

The press did not question why former HDOH Director Dr. Chiyome Fukino had stated publicly that she had twice viewed the original record within the department’s files but Abercrombie, the sitting governor, could not procure it years later.

After months of mounting pressure, on April 27, 2011, the White House posted what it said was a scan of a certified copy of Obama’s “long-form” birth certificate allegedly obtained through Obama’s personal attorney during an in-person visit to the HDOH, reportedly obtaining two certified copies of the document from then-HDOH Director Loretta Fuddy.

The White House also released a letter written by Atty. Judith Corley of Perkins Coie on behalf of her client, Obama, requesting special dispensation to obtain the long-form record rather than the short-form document released in 2008.

Although the HDOH claims that it stopped providing certified copies of long-form birth certificates to requesters in 2001 due to an administrative change, The Post & Email and others have been told by former Hawaii resident Miki Booth that some of her acquaintances obtained the long-form as recently as 2010 and perhaps later.  Booth provided images of the documents to support her claim.

The Associated Press has been particularly egregious in failing to report the findings announced in a third and final press conference stemming from a criminal investigation into the long-form image posted at whitehouse.gov. The 5+-year investigation commissioned by former Maricopa County Sheriff Joseph Arpaio found that not only is the long-form birth certificate a forgery, but Obama’s purported Selective Service registration form is also fraudulent.

Following the final press conference on December 15, 2016, the Associated Press avoided expounding on the “nine points of forgery” which were confirmed by two different forensics analysts in different parts of the world to have been lifted from a birth certificate belonging to a woman born 16 days after Obama’s claimed birth.

Instead, the AP wrote that the investigation was “concluded” since Arpaio was leaving office on January 1.  The article also focused on Obama’s birthplace, which Arpaio said was never the purpose of the investigation to determine.

Over the last nine years, the mainstream media and a myriad of political operatives and pundits have worked to affirm Obama’s claim to a birth in Honolulu, HI on August 4, 1961 with the knowledge that Article II, Section 1, clause 5 of the U.S. Constitution requires the president to be a “natural born Citizen.”

The Washington Post and others have likewise stressed the question as one over Obama’s birthplace, perpetuating the pejorative of anyone doubting Obama’s life story as a “birther.”

Neither the AP nor The Washington Post has ever shown definitive proof of Obama’s claimed birth in Hawaii through their own investigations.

No explanation has ever been offered by the Associated Press for its own divergent reporting of Obama’s early years and his father’s background, nor has The Washington Post ever explained why one of its “award-winning” journalists reported that Obama was “raised in the Kansas heartland” when no one else ever made that claim.

With Obama’s claimed father a lifelong foreign citizen, first of first Great Britain and later Kenya upon that country’s independence, if Obama were born outside of the country, even basic U.S. citizenship would be in doubt given that his 18-year-old mother might not have been old enough to confer her U.S. citizenship to her son.

The mainstream media has been monolithic in its refusal to report that Arpaio’s investigation into the long-form birth certificate image uncovered the fact that airline manifests for the days preceding and proceeding Obama’s claimed birth are missing from official microfilm provided to investigators at cost by the National Archives.

The discovery that Obama’s literary agent published a biography stating that Obama was “born in Kenya and raised in Indonesia and Hawaii” was quickly reiterated by an incurious media after the agent said she made a “fact checking error” when preparing the bio.  In April 2007, two months after Obama declared himself a presidential candidate, the biographical sketch was changed to say that Obama was born in Hawaii.

NPR and The Honolulu Advertiser likewise changed their reportage from stating that Obama was born in Kenya and Indonesia, respectively, to “born in Hawaii.”

The fact that former Gov. Bill Richardson, a Democrat, described Obama as “an immigrant” shortly before the 2008 election was never questioned.  It is widely-known that immigrants, should they become American citizens, are not considered “natural born Citizens.”

The ramifications if Obama were found to have deceived the public about his origins and life narrative are, of course, grave, hence the media blackout on the findings of the forgery of his allegedly government-issued documents.  Neither the FBI nor its parent agency, the US Department of Justice, has investigated the claims arising from the Arpaio probe.

Whether or not that situation will change under the Trump administration, which takes office at noon on Friday, remains to be seen. At the conclusion of the December 15 presser, Arpaio announced that although his and Zullo’s investigative work was completed, he was providing all of the evidence, some of which has not yet been released to the public, to federal authorities and Congress.

Chief investigator Mike Zullo contended years ago that the long-form birth certificate image was released to the public “with the intent to deceive.”

The mainstream media has done its part by continuing that deception.  During Wednesday’s presser, Obama said that the press should be “skeptical” and “make sure that we are accountable to the people who sent us here.“