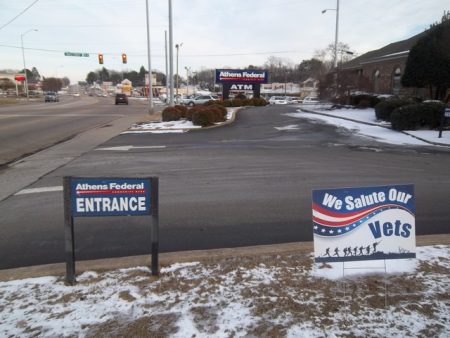 (Jan. 14, 2017) — A sign saying “We Salute Our Vets” outside of the Athens Federal Community Bank in Athens, TN is belied by the actions of the bank’s president and CEO, Jeffrey L. Cunningham, who was the hand-picked McMinn County, TN grand jury foreman from October 2011 through early March 2014.

According to Bloomberg, Cunningham has been President and CEO of Athens Federal and Athens Bancshares Corporation since March 2000.  Although his salary was previously noted as $630,000, it no longer appears in his public profile.

In February 2014, Cunningham threatened a 20-year Navy veteran, Walter Francis Fitzpatrick, III (Ret.), with arrest when he attempted to bring evidence of local corruption to the grand jury for its review as is permitted by Tennessee law.  Fitzpatrick’s subsequent request for a restraining order against Cunningham was denied by Judge Jon Kerry Blackwood, who had sentenced Fitzpatrick to jail on December 1, 2010 in Monroe County.

McMinn and Monroe Counties are located in the state’s Tenth Judicial District along with Bradley and Polk Counties.

Local media and various Tennessee government entities have attempted to legitimize judges’ hand-selection of the grand jury foreman their reappointing of the same grand jury foreman for successive terms rather than pointing out the inherent conflict of interest and violation of state law.  The practice has been ongoing for at least a century, and feeble attempts by the legislature to make the system equitable have been quashed by members of the same body, all of whom are sworn to uphold the Tennessee Constitution.

On March 18, 2014, Cunningham carried out his threat when he became Fitzpatrick’s accuser on counts of harassment, aggravated perjury, stalking and extortion for which the grand jury issued indictments using a hastily-appointed temporary foreman.  As Fitzpatrick sat on a bench outside of the grand jury room reading a book awaiting a decision on whether or not he would be called in to testify, he was arrested and jailed as a result of the indictments signed by then-Tenth Judicial District chief prosecutor R. Steven Bebb.

On June 24, 2014, Fitzpatrick was convicted by a trial jury of “aggravated perjury” and extortion based on the contention that he was not truthful in his petitions which the grand jury never saw.  He was acquitted of stalking, and the harassment count had been dropped by Blackwood, who presided over the trial.

Fitzpatrick spent more than two years in Tennessee state prisons, where he became seriously ill with septicemia, lost over 40 pounds, and nearly lost an appendage.

The handpicking, outside of the customary vetting process, of grand jury foremen by Tennessee criminal court judges has been reported by this publication since September 2009, when Fitzpatrick first brought a criminal complaint of treason against Barack Hussein Obama to the Monroe County, TN grand jury which ultimately experienced the same lack of review as in McMinn County.

During Fitzpatrick’s trial, Cunningham testified that Fitzpatrick “seems to believe” that the contents of his submissions intended for the grand jury’s review were accurate, which should have brought into question the “aggravated perjury” charge.

Cunningham also admitted that he had never filed a criminal complaint against Fitzpatrick, nor could the prosecution produce a complaint from anyone else in the community.

According to the appellate panel’s synopsis of events, Cunningham had clearly played a part in whether or not the grand jury would review Fitzpatrick’s petitions.

Constitutionally, grand juries are tasked with examining evidence submitted by citizens or a prosecutor of crime in the community as well as seeing that the county jails are run properly.  Having been an inmate in the Monroe County jail on five occasions, Fitzpatrick has told us that the conditions inside are “medieval.”

The appeals court upheld Fitzpatrick’s conviction, and on October 3, 2016, the U.S. Supreme Court refused to grant a Writ of Certiorari to Fitzpatrick’s petition which asked the single question:

Tennessee has been ranked in some studies as the most corrupt state in the Union.

2 Responses to "How Does Athens Federal Community Bank “Salute” Veterans?"