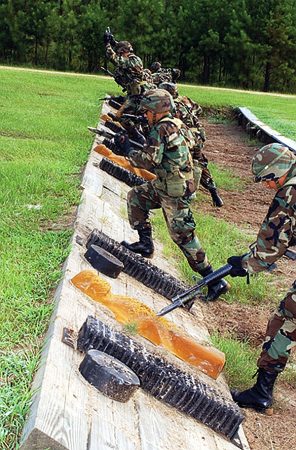 “As you were. Welcome to Uncle Sam’s Country Club. You all volunteered, so allow me to offer my congratulations. You have joined what is known as the United States military. For the next couple of weeks you will be made into the image of a General Issue Soldier: a GI.

“You will be guided by the finest military minds our country has to offer. Allow me to introduce a couple of your instructors: first is retired Marine Corps Gunnery Sergeant Smith, who will be in charge of the age-old question, ‘What’s in it for me?’

“Next is another Marine, retired Lt. Colonel Oliver, who will teach you the fine art of doing it right the first time so you don’t waste your energy having to do it all over again.

“And last is a Navy ‘Snipe,’ a ‘Bilge Rat,’ who was once a Chief but the Navy got tired of busting him every other month, so they just made him a permanent Seaman, Chester Goode. Chester, being Navy, will teach you the delicate art of ‘Doublespeak.’ Seaman, how about giving the recruits an example of your expertise?”

“Aye, aye, Captain, sir, with your permission, that is. I really am honored to be able to walk you through the fine art of duplicity. When are we going to sea again, Captain? I, for one, would rather be at sea than plaster the ship with red lead. Oh, yes, keep my liberty: save me from getting drunk.”

“Very good, Seaman. Perhaps the others should also say a few words.  Colonel?”

“Be glad to, sir. Don’t pay any attention to Seaman Goode: all he’ll do is get you in trouble. Just follow the rules and do the best you can is all we ask of you. I’m sure you’ll do just fine.”

“Hello? Sorry to barge in: I know the officer has good intentions but that’s the way, just maybe, they say how it is, but then again maybe it’s not, okay? Use you head and never, but never, volunteer for anything at anytime, understand? The Navy has a long and glorious history of, let me see, how to say it? Not being 100% truthful on what you’re actually volunteering for; get it?”

“That is not quite the attitude we wish to promote, Seaman.”

“It was my understanding we’re here to give these recruits a ‘heads-up’ course on the philosophy of being a cynic. As a matter of fact, it says right here in the course syllabus: college credit applied: three quarter-hours awarded to the successful completion of ‘the course.‘”

“No, sir: let me ask you this: you find yourself in a fire fight. Do you kill the enemy because they’re the enemy or because you don’t feel like ‘buying the farm’ right there and then? Or, more likely, you want to save your squad/platoon/company?”

“You do your job, soldier.”

“Precisely: you do your job and that’s to watch out for your buddy, isn’t that right? You watch out for the other guys, even if it means your own life.

“Class, the truth of the matter is, while you’re out there in ‘no-man’s-land,’ you’re on your own, and don’t rely on the radio or the cavalry to come and save you. Just be prepared for the worst, okay?”

“Hello, Gunnery Smith here: about this: ‘What’s in it for me?’ Well, it means do yourself a favor and try and remain invisible. I was offered a couple of medals but had to turn them down for my own good. I mean, stay off the radar, so to speak, if you know what’s good for you. Keep your head down by keeping your nose to the grindstone, but that doesn’t mean not to pay attention. On the contrary: the more you know the better your chances of survival, right? Being on time isn’t always the best thing to do, as one heck of a good example.”