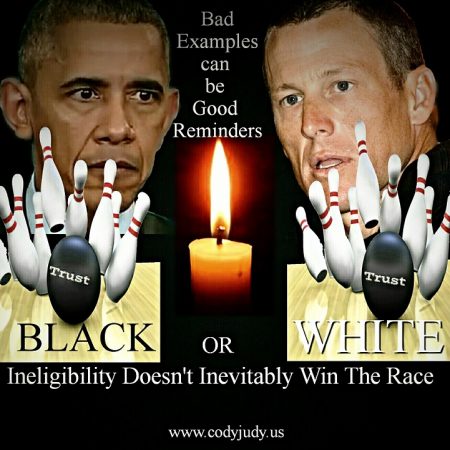 (Jan. 13, 2017) — Lance Edward Armstrong (born Lance Edward Gunderson, September 18, 1971) is an American former professional road racing cyclist. Armstrong had won the Tour de France a record seven consecutive times from 1999 to 2005, before he was banned for life and all his results from August 1998 were voided, as a result of long-term doping offenses. Armstrong had been the subject of doping allegations ever since winning the 1999 Tour de France. In 2012, a United States Anti-Doping Agency investigation concluded that Armstrong had used performance-enhancing drugs over the course of his career and named him as the ringleader of “the most sophisticated, professionalized and successful doping program that sport has ever seen.” Armstrong chose not to contest the charges, citing the potential toll on his family. As a result, he received a lifetime ban from all sports that follow the World Anti-Doping Agency code—effectively ending his athletic career. He was also stripped of all of his achievements after 1998, including his seven Tour de France titles The Union Cycliste Internationale upheld USADA’s decision and decided that his stripped wins would not be allocated to other riders. Armstrong chose not to appeal the decision to the Court of Arbitration for Sport. In a 2013 interview, Armstrong confessed that some of the allegations were true.[12][13][14] He has declined to testify about the full extent of his use of the drugs. In the aftermath of his fall from grace, a CNN article wrote that “The epic downfall of cycling’s star, once an idolized icon of millions around the globe, stands out in the history of professional sports.”

Barrack Hussein Obama, aka Barry Soetoro (born – no one knows for sure, because his long-form birth certificate was a forgery) (the child of – again, no one knows for sure because his birth certificate is a forgery) is a Politician in the United States (he may be American, but know one knows for sure because his birth certificate is a forgery) Hussein/Soetoro was formally adopted by Lolo Soetoro in order to attend Muslim elementary schools in Indonesia. There is a record that is not fabricated for us to know that. After losing a Congressional seat Race in 2000, he won a U.S. Senate seat in 2004 by exposing a sealed Divorce Record of a  rival Republican (Jack Ryan). Obama won outspending Alan Keyes Mr. Ryan’s replacement 14M to 2.5M. He won the 2008 U.S. Presidential Democratic Nomination after former president Bill Clinton and Hillary Clinton running in the Primary refused to question his ineligibility as a candidate qualified to be President.  Threats to their daughter Chelsea were rumored after the assassination-style death of a close friend, and Arkansas SuperDelegate Chairman. Of course a lush agreement Hillary’s campaign debts would be paid and she would get a lucrative deal in the Secretary of State Office where Obama would look the other way while she padded the Clinton Foundation with guarantees of her election win in 2016. Obama won re-election in 2012, but only after releasing in April of 2011 what became known as a fabricated or forged identification, or long form birth certificate, in what Obama represented by hand to the Press Core as an Original. Obama let us all know just how corrupt the law enforcement could be, as even the U.S. Supreme Court refused to hear any argument challenging his Ineligibility in the Democratic Primary (2012) Case No 12-5276 and 2014 Case No 14-9396, that both highlighted the law enforcement Cold Case Posse Investigation of Maricopa County, Arizona under 6 term winning Sheriff Joe Arpaio with a presidential candidate with Standing- Cody Robert Judy.  The Cold Case Posse investigation only sought confirmation of originality, which failed. The epic downfall of Barack Obama stained the U.S. Presidency in a way never realized in corruption in politics involving politicians and the American People who had no standing as ruled by the lower courts while the highest Court refused, even unjustly dismissing Forma Pauperis Motion granted by lower courts in desperation to cover up the political atrocity. Obama was found to be the ringleader of the most sophisticated, professionalized and successful identification fraud in the political arena subverting the qualifications for President in America’s U.S. Constitution Art. II. Sect. 1, C-5, that has ever been seen in U.S. history. After exposure by the media, Obama was stripped of his title as America’s 44th President and U.S. history was changed.

The crowd did not have standing to object to any cheating in the Race. The American political contest for the highest office of the land is known as The Race for the Presidency. It’s a grueling marathon that surpasses even the training of 2200 mile Tour de France, The Boston Marathon, or the 156-mile Marathon des Sables through the Sahara in southern Morocco. The Presidential Race often begins two years prior the Vote.

Cody Robert Judy has been through three of them – 2008, 2012, and 2016. It should be no surprise he’s run an official marathon (2013), time 4 hours 44 minutes, which averages over the 26.2 miles a good 10 minute mile. Not really good for marathon standards, but respectable for the Clydesdale Division which is for men 200 pounds and over. Marathons are not something typical football players run.

The Presidential Race that was Rigged – Bad Examples Can Be Good Reminders added on Friday, January 13, 2017