“DRIVING WITHOUT A LICENSE” 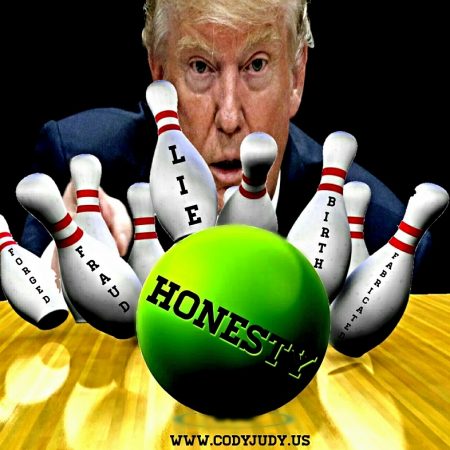 (Dec. 23, 2016) — Alex Jones NETWORK INFOWARS does a big follow up report on Obama’s forged birth certificate. Can Trump have it BOTH ways, though? If it’s the greatest fraud in American history, what side did Trump come down on to WIN ELECTION 2016?

The upsetting thing to Establishment Republicans and Democrats is Donald J. Trump was right early on about simply asking that Obama show his birth certificate. Americans do have a right to vet their President to qualifications set as a standard in the U.S. Constitution. Courts have a duty to hear standards usurped by a Presidential Candidate especially via another Presidential Candidate suffering from the harm and damages of the usurpation of standards and rights.  Trump said it was in order to prove Obama was born in the United States. Hillary Clinton admitted Trump got a huge following by voicing the question publicly to the media.
Hillary Clinton using Color Against The Constitution

The bad thing is PEOTUS did nothing as far as I know to help the Cold Case Posse with funds, or to support a Candidate for President with two U.S. Supreme Court cases (12-5276 & 14-9396) begging them to consider the evidence supporting identification fraud, and thus some form of qualification for the Office of President put out by Obama’s own hand being fabricated, as well as the qualifications of the Office of President being usurped in 2008 or 2012. Not a single add in the NY Times? I certainly didn’t get a dime from Mr. Trump and I think the public funded most of the Cold Case Posse from contributions for that cause.

When Trump capitulated- caved in at the precipice of the Election Teeter-Totter stating very emphatically, “Obama was born in the United States period “, during the 2016 Campaign, he was doing what to you? He was doing what to Sheriff Joe Arpaio’s Cold Case Posse’s Report?

He was selling “Fraud” and calling the Truth a Fraud and this is proven by Forensic Examiners now, and he was doing it for your Votes and the Media’s Favor. “Oh..look at him. He’s such a good boy now. He said Obama was born in the United States like all the other established politicians“?

How could he have known Obama was born in the United States of America unless Obama’s Birth Certificate was not a Fraud? Did I ever say that as a Presidential Candidate? No, because I knew there was no way to know that.

If Obama’s birth Certificate is a fraud, there is no PROOF Obama was born in the U.S.. NONE! Republicans voted for a guy no better than Democrats voted for in Obama. You know I feel bad. It’s like gosh, I tried so hard but no one would listen to me? The mainstream media reminds me of this joke.

It’s like driving as a blonde without a license, being pulled over and asked for it by a police officer who is also blonde. Asking the blonde officer, “What does a license look like?” Having the blonde officer say, “It’s a rectangle thing that shows a picture of you.” Acknowledging the officer, and looking in your purse for that. Pulling a make-up compact mirror out and saying, “Oh! Here it is!” Handing that to the blonde Officer who looks at it and exclaims, “Oh, wow! I didn’t know you were an officer too!”and handing her the compact back, satisfied she has a license, except with the President-Elect and a Usurper acting in their places.

Winning With Lies: Was Trump Right? added on Friday, December 23, 2016

One Response to "Winning With Lies: Was Trump Right?"