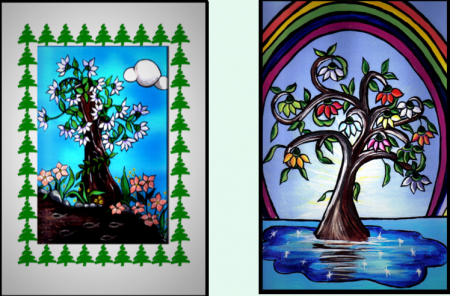 “Now, just about the time when the Romans started persecuting the Christians, there was a man named Stephen.  Stephen wasn’t afraid of saying how he felt about Jesus.  He loved Jesus very much and he made sure everybody knew that.  Of course, this created a lot of trouble for Stephen.  Eventually he had to stand trial for the things he believed.”

“You mean the Romans made him go to court?”  David asked.

“Not the Romans, but the Sanhedrin and the Pharisees,” Dad answered.  “They were very educated Jewish men who didn’t believe Jesus was the Son of God.  So they got together with the Romans and decided to stone Stephen.  Do you know what ‘stoning’ is?”

“Yuk!” David replied.  “I sure do.  That’s when people throw heavy stones at you until you die!”

Dad sadly replied, “That’s right, David, and that’s what they did to Stephen.  Now after Stephen died, it became much harder for the Christians to even talk about Jesus.”

“Were they afraid, Dad?”  David asked.

“They sure were,” Dad answered, “but that didn’t stop them.  They made up a secret sign in the form of a fish.  You’ve seen the sign.  It’s the fish sign we use today to represent Christianity.  When they wanted to know if they were talking to another believer, one person would use his foot to draw half of the fish in the dirt, and then, if the other person was a believer, he would draw the other half of the fish in the dirt.”

“Something like that, David.  Now, remember the old wood from Jesus’ cross was in the middle of the town, and people kind of used it like a street sign.  Everybody knew where that old stick was.  So, when the Christians needed a place to meet that didn’t look suspicious to the Romans, they would meet in front of the cross and pretend that they just happened to be passing by and stopping a minute to talk.”

Dad chuckled.  “That’s right, David.  They didn’t know it.  But can you guess what happened next?”

Dad continued.  “Well, as they met in front of the cross to talk about Jesus, they started feeling a lot of love for each other, which is what Jesus is all about.”

“Oh, Dad, I know that.  I know Jesus is love because God is love, and Jesus is God too.”

“Yes, David.  We know that today,” Dad said, “but back then they were just starting to understand.”

“What happened to the tree?”  David asked.

“One cold winter night, that ugly old tree began to bud.  And that was really strange because it wasn’t even spring–it was winter.  And the more love that was shared, the more the tree grew.  Then the tree sprouted branches and the branches burst with buds.  The buds turned into blossoms, and the blossoms turned into fruit–not any old fruit, this was special fruit that was fed with love, and joy, and life.”

“At first the Romans didn’t notice that the tree had life in it.  Then the tree grew so spectacular that even the Romans couldn’t help but notice.  Some even ate its fruit, and when they did, they too became Christians.  It was truly a miracle, son–a wonderful, wonderful miracle.”  Dad paused for a moment as he sipped his hot chocolate and gazed at the Christmas tree.

“What happened next, Dad?”  David asked.

“Then some of the Christians began to decorate the tree.  They put stars on it to represent the star that stood over Jesus’ manger when He was born.  They even put little carved decorations on it.”

“I’ll bet they put lights on it too?”  David asked.

Dad answered.  “No, son, they didn’t have to.  The tree was so incredible that it began to shine on its own, just like the light in us shines out when we believe in Jesus.”

Dad replied, “It sure was, son.  The people even named the tree.  They called it the Tree of Life.”

“Wow!”  David exclaimed.  “Is it still there today? You said I could see it.”

“No, son, it’s not still there,” Dad answered.  “Let me finish the story.  The Romans decided to cut it down because they noticed that it made the Christians happy.  They gathered up some men and left early in the morning when the Christians were still asleep, and they went to cut down the tree.”

“That’s so sad,” David whispered.  “If they didn’t do that, I’ll just bet that tree would still be around today.”

Dad smiled.  “That’s the best part of the story.  You see, when the Romans went to cut down the tree, they got quite a surprise-“ Dad paused a moment.  “The tree wasn’t there.”

“We don’t really know.  Nobody ever spoke about the tree again, except for one time in the Book of Revelation, which is the very last part of the Bible.  There we are told that in the middle of Heaven, right in the middle of a crystal lake, stands the Tree of Life.  The angels gather around it and sing with great joy and happiness.  So will we someday.  Someday all true believers will be gathered around the Tree of Life and on that day we will all be happy with Jesus in Heaven.”

“That’s a great story, Dad.  I’ll never be able to look at a Christmas tree the same way again.  I’ll always think of that old cross and how that old cross turned into the most beautiful tree that ever lived.”

Dad smiled.  “Good, David, and remember that no matter how beautiful a Christmas tree is, it could never be as beautiful as that old ugly tree the Romans cut down over 2,000 years ago.”

“Dad, Mom, I love you,” David said as he gazed at the Christmas tree.

“We love you too, David,” said Dad and Mom together.  Just then the Christmas tree lights sparkled a little brighter.