INVESTIGATION TO BE TURNED OVER TO “FEDERAL AUTHORITIES” 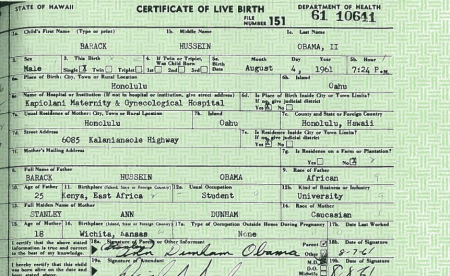 The presser was live-streamed by a number of mainstream and alternative news outlets.

The investigation has been ongoing for more than five years, having launched in September 2011.  At that time, Maricopa County Sheriff Joseph Arpaio commissioned his Cold Case Posse to investigate the image in order to remove suspicion expressed by several experts that it was a forgery.

On Thursday, Arpaio spoke for the first few minutes, then turned over the presentation to Cold Case Posse lead investigator Michael Zullo.  Zullo then provided background on a trip he and an MCSO detective took to the Hawaii Department of Health (HDOH) early in the process as well as four trips Zullo made to Washington, DC to avail himself of documentation in the Library of Congress pertaining to the probe.

Zullo made it clear that neither the HDOH nor the hospital where Obama was purportedly born was willing to cooperate with the investigation, as both entities summoned local police to remove Zullo and Det. Brian Mackiewicz from their premises.

Over the course of the investigation, two different document examiners in different parts of the world were commissioned by Zullo to conduct an in-depth analysis of the image posted at whitehouse.gov on April 27, 2011.  Although approaching the task from different scientific angles, lead investigator Mike Zullo explained, both examiners arrived at the same conclusions:  that the alignment of certain items on the whitehouse.gov document with the birth certificate of Johanna Ah’Nee could not have occurred by chance.

A video was shown demonstrating how items from the Ah’Nee birth certificate appear to have been lifted and placed into the corresponding boxes in the image representing Obama’s long-form birth certificate, causing them to be precisely aligned.

Zullo then explained how the two document examiners, one in Hawaii and the other in Italy, came to the same conclusion without any corroboration or communication between them.

Following that explanation and the stated impossibility by the Hawaii examiner, Reed Hayes, that the alignment could have happened spontaneously, the video was shown a second time for greater audience comprehension.

Arpaio resumed his place at the podium for the last several minutes to state that the investigation would be turned over to “federal authorities” and Congress before he leaves office on January 1. Arpaio additionally suggested that Congress consider legislation mandating vetting of presidential candidates.