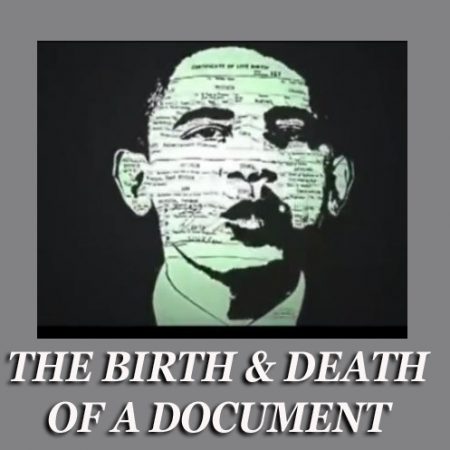 (Dec. 13, 2016) — As the Demonic Democrats and their cohorts in the media continue their attempts at creating scandal out of thin air regarding DJT, the most criminal of all activities of the Obama Administration is about to be presented to the public and news outlets.  Most likely this will be the last time this information will be presented to the public.  And it will be completely snubbed by the establishment, just as it has from the first day it was discovered.

Outgoing Sherriff Joe Arpaio, having lost his re-election effort in Arizona resulting from Soros spending millions of dollars in Maricopa County to defeat him, will end his long career, midnight December 31, 2016.  He and Cold Case lead investigator Mike Zullo have been investigating Obama’s Birth Certificate which is posted on the White House website.  As many will recall, it was finally posted after several years of delay because of a challenge from then-businessman Donald Trump.

Both Zullo and Arpaio have said from the very beginning that the investigation had nothing to do with where Obama was born or if he was eligible or ineligible to hold the office of the President.  The investigation centered entirely upon the possibility that the document presented to the American people, by the Obama Administration, is not what they claimed it to be.  That is, that it is a photocopy of the original Birth Certificate of one Barack Obama, as issued by the state of Hawaii.

Experts in graphic design and many people who have had occasion either for work or other activities who looked at the birth certificate posted on whitehouse.gov noticed some strange anomalies related to it. These people and others have, for a long time, known that there was something uncomfortably wrong with that document.  As a result, Sheriff Arpaio was asked by several citizens to look into it.  After having done so, utilizing several experts and some basic common sense, the lead investigator, Mike Zullo, called a press conference during which he laid out what they had discovered.  Their determination was that there were significant reasons and facts to state the high possibility that the document in question was a forgery.

Since the use of and the creation of a forged document would be a federal crime, Zullo turned over all his data to Congress for them to begin an investigation which would ultimately discover who actually produced the document and, of course, why.   Update: Congress refused to look at the documents.  So there it sat for several years.

Zullo however, was authorized to continue his investigation during these past few years.  At every turn, new areas of deception and new leads which needed to be followed were uncovered.  What has been found has been described by Zullo as astounding. While Congress, it appeared, would rather drink acid through a straw than touch anything that involved White House criminal activity, Zullo continued on, one path leading to another and another.   That investigation is now as much as 95% complete and the time has come for the American people to be given the chance to see what has been uncovered.  That will happen in a live-stream Facebook news conference this Thursday, December 15th at 6:00 pm EST.  The mainstream press has been invited but no doubt they will be busy checking for Putin’s DNA in Trump’s dirty laundry basket.

It is imperative that I state very clearly and unequivocally that no legal action will be instituted nor will the establishment show any interest concerning the revelations of this news conference. Obama will be protected for a generation.  That is a given.

But, for those of us who have suspected that something was very wrong with the history and documentation of Barry Obama and are interested in hearing what the Cold Case Posse’s years-long investigations have uncovered, this news conference will be quite an eye-opener.  Of that I will promise you.

The live stream can be viewed here:

One Response to "Final Page Turn on an Illegal Endeavor"