“KEPT ME OUT OF JAIL” 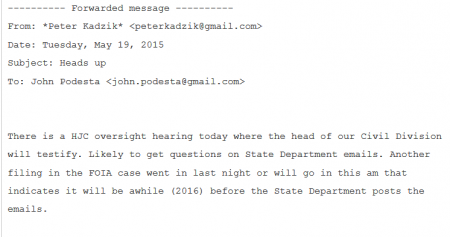 (Nov. 2, 2016) — A May 5, 2015 email released by WikiLeaks on Wednesday reveals Clinton campaign operatives Kristina Schake and John Podesta reviewing an offer from the son of Assistant Attorney General Peter J. Kadzik to assist Clinton in her second quest for the White House.

“I have always aspired to work on a presidential campaign, and have been waiting for some time now for Hilary to announce so that I can finally make this aspiration a reality,” the younger Kadzik, “PJ,” wrote in his email.  “…From my father’s experience I understand the intensity of presidential campaigns, and am ready and willing to take on whatever position needs to be filled.”

PJ’s father is now the designated liaison to Congress at the U.S. Department of Justice and was recently assigned to the renewed investigation into Hillary Clinton’s email scandal following revelations of new evidence from FBI Director James B. Comey in a letter to the Senate Judiciary Committee on Friday.

The Justice Department oversees the FBI.  Comey has been criticized by both Democrats and Republicans for the timing of his letter to the Senate Judiciary Committee for possibly interfering with the November 8 election.

Just two weeks after PJ offered his services to the Clinton campaign, the elder Kadzik sent an email with the subject “Heads  up” to five Clinton campaign operatives, including campaign chairman John Podesta, in which he wrote, “There is a HJC oversight hearing today where the head of our Civil Division will testify. Likely to get questions on State Department emails. Another filing in the FOIA case went in last night or will go in this am that indicates it will be awhile (2016) before the State Department posts the emails.”

The Congressional Record states that on May 19, 2015, the following meeting of the House Judiciary Committee took place:

Clinton was Secretary of State from January 2009 to February 1, 2013.  On March 2, 2015, The New York Times reported that she used a private server and email address while conducting government business.  Although Clinton said she later turned over more than 50,000 pages of emails involving government business to the U.S. State Department, Clinton did not dispute in an interview with ABC News that another 33,000 emails were destroyed.

“I had no obligation to do any of that,” Clinton said of her having produced “55,000 pages” of her government emails.

Some have suggested that WikiLeaks has the missing 33,000 emails and that they could be highly incriminatory.

The elder Kadzik was a member of Obama’s presidential transition team, as his phone number was provided in a November 12, 2008 email to Podesta, also a part of the team.  Kadzik was listed as a possible Obama fundraiser in December 2007.

On March 3, 2015, Kadzik extended an invitation to Podesta to celebrate his wife Amy’s 50th birthday.

On October 20, 2015, Podesta invited Kadzik to a birthday party for “Tony.”  John Podesta has a brother named Tony who is founder and chairman of the Podesta Group, a public-relations firm.  According to the UK Daily Mail on Tuesday and in an August 19 Reuters article, Tony Podesta’s activities associated with the Podesta Group are under FBI investigation.

Tuesday’s UK Daily Mail article, while very detailed in its reportage of five alleged active FBI investigations of Hillary Clinton’s inner circle and associates, does not appear in an internet search as of this writing, although it is summarized at World Tribune.

In a March 11, 2014 email, Georgetown University law student Phil Beshara asked Podesta, who is a law professor there, if he could arrange a meeting between Beshara and the elder Kadzik.

Ten days later, Beshara thanked Podesta for “connecting me with Peter Kadzik.  “We had a very productive conversation this week that led to some great insights for my paper,” Beshara wrote.

Tyler Durden of Zero Hedge describes the elder Kadzik as “Podesta’s best friend.”  In an email dated September 8, 2008, Podesta appeared to recommend Kadzik to an Obama campaign operative, Cassandra Butts, who was hired as Deputy White House Counsel after Obama took office and later appointed “Senior Advisor in the Office of the Chief Executive Officer at the Millennium Challenge Corporation.”

“Kept me out of jail,” Podesta wrote to Butts of Kadzik.

According to Fox News on Tuesday:

The Justice Department official in charge of informing Congress about the newly reactivated Hillary Clinton email probe is a political appointee and former private-practice lawyer who kept Clinton Campaign Chairman John Podesta “out of jail,” lobbied for a tax cheat later pardoned by President Bill Clinton and led the effort to confirm Attorney General Loretta Lynch.

Peter Kadzik, who was confirmed as assistant attorney general for legislative affairs in June 2014, represented Podesta in 1998 when independent counsel Kenneth Starr was investigating Podesta for his possible role in helping ex-Bill Clinton intern and mistress Monica Lewinsky land a job at the United Nations.

In another email, the Kadziks and John Podesta made dinner plans for January 13 of this year, revealed in another email to have taken place at Podesta’s home.

Kadzik has donated to a political action committee supportive of Hillary Clinton and attended Georgetown with Podesta.