“I KNOW WE CAN MAKE PROGRESS TOGETHER” 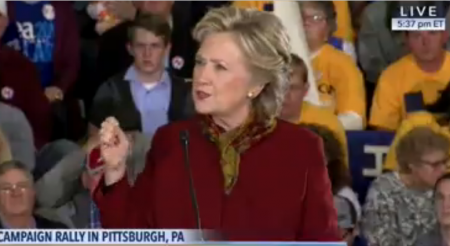 (Oct. 22, 2016) — On Saturday evening, Hillary Clinton and running-mate Tim Kaine are campaigning in Pittsburgh, PA on a rare event where they are together on the campaign trail.

At 5:36 p.m., Clinton told the crowd that having spent four and one-half hours “on the stage with Donald,” meaning Republican presidential nominee Donald Trump, she “proved she has the stamina” to serve as president, contrary to Trump’s claims.

Clinton told the crowd that she wants to be president “for all the children.”

At 5:37 p.m., Clinton said that when people speak with her and “take her measure” on the trail, they sometimes say that they have a loved one addicted to drugs or with mental illness who need help.

“There has been no other place in the history of the world that has given so much opportunity to so many,” Clinton said at 5:40.

“He refused to say that he would respect the results of this election,” she said of Trump, who first said he would accept them, but after documented cases of voter fraud activities came to light this week, Trump said at the third debate on Wednesday night that he would wait and see what comes of it.  “The peaceful transition of power is one of those things that set us apart,” she continued.

Clinton said that “people should be paid fairly” for their work, although emails released by WikiLeaks last week show that the Clinton Foundation pays women less than men.

At 5:44 p.m. Clinton said that people at the rally should tell their Trump-voting acquaintances that she “wants to be their president, too,” something Obama said in 2008.

“Anger is not a plan,” she said, stating that politicians can “disagree without being disagreeable.”

“We need plans that will help us deal with the legitimate questions…in Pennsylvania,” Clinton said, although she was not specific.  “I know we can make progress together.”

At 5:46, she said that “working families” and the middle class need to become stronger and more prosperous.  She decried “trickle-down” economic policies which she said favor the rich and do nothing for the middle class.

Clinton also criticized Trump for “losing $1 Billion,” as was shown on three pages of Trump’s 1995 income tax return leaked to The New York Times.  “He stands at ‘0’ for everything,” she said.

She said that “advanced manufacturing” can be “brought back to the U.S.” and Pennsylvania, specifically.

Western Pennsylvania is an area with numerous coal mines, whose employees Clinton has previously said she wishes to put out of work.

She said that members of Congress who cater to “special interests” should be voted out of office.

At 5:53, she spoke about her proposal for a “free” college education to anyone whose family makes $125,000 or less annually.  She also advocated for “universal pre-K.”

At 5:56, Clinton said to her followers that if they speak with a Trump supporter between now and November 8, “I hope you will stage an intervention.”

There was then a technical problem with C-Span’s feed, which after a brief moment, froze.