WITHOUT A VALID BIRTH CERTIFICATE, HOW DO WE KNOW WHO HE IS? 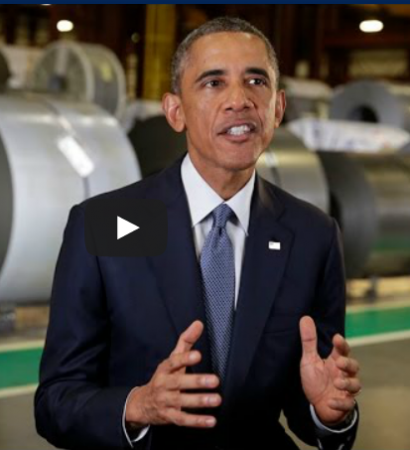 Obama was capitalizing on a recording released by The Post last Friday at approximately the same time that Wikileaks began releasing emails from the account of Clinton campaign chairman John Podesta, some of which have revealed Clinton staffers’ disdain for religious Americans and early concern that Trump’s “celebrity politics” persona would be difficult to overcome.

In the leaked recording, Trump and then-“Access Hollywood” co-host Billy Bush, a cousin of George W. Bush and Jeb Bush, were heard discussing Trump’s alleged attempted seduction of a married woman couched in vulgar language. It is unclear who recorded the conversation, which, as The Post & Email reported, might have fallen under the presumption of privacy as the two men talked on a tour bus en route from the Access Hollywood set to the filming location of “Days of our Lives” in Los Angeles, where Trump was to make a one-time cameo appearance playing himself.

On Tuesday rumors surfaced that the recording was leaked by Republican operatives working for Speaker of the House Paul Ryan, and specifically, by former Romney aid Dan Senor.

On his Twitter feed on Tuesday evening, Senor avoided a direct response to the accusation that he was the leaker, and Senor’s tweets issued after the recording was made public encouraged interviewers to ask Trump surrogates “about the tape.”  Ryan, Romney, Sen. John McCain and many other Republicans quickly denounced Trump for his 11-year-old remarks, with Ryan vowing not to campaign with Trump for the remainder of the election season.

McCain and dozens of others said they will not vote for Trump next month despite Trump’s endorsement of a number of them, including McCain, before their primary contests.

On Saturday, Ryan and Trump had been scheduled to appear together at a Wisconsin rally, but Trump remained in New York to prepare for Sunday night’s debate. Trump’s vice-presidential nominee, Indiana Gov. Mike Pence, also canceled a hastily-scheduled appearance with Ryan that day.

While Obama has sharply criticized Trump for his positions, temperament, fitness for the office of the president, and most recently, his leaked remarks which Obama claimed would preclude Trump from obtaining employment at 7-11, Obama himself, as it stands now, would not be able to present the requisite documents in order to work at a 7-11 or anywhere else in the United States given that his long-form birth certificate and Selective Service registration form have been found by criminal investigators to be fraudulent.

Neither the White House, U.S. Department of Justice, nor the FBI has explained why the White House posted a forgery on April 27, 2011 at whitehouse.gov representing Obama’s purported long-form birth certificate allegedly obtained from the Hawaii Department of Health several days before.

More than five years ago in September 2011, Maricopa County, AZ Sheriff Joseph M. Arpaio commissioned his Cold Case Posse to launch an investigation of the birth certificate image given that several experts had commented on the record that they found it consisted of layers and other abnormalities which would not have been present if the image had been a scan of a real, paper document.

At a press conference on March 1, 2012, Cold Case Posse lead investigator Mike Zullo and Arpaio announced that the initial findings of the investigation were that probable cause existed to believe that the long-form birth certificate image is a “computer-generated forgery.” Later in the press conference, Zullo revealed that not only was the birth certificate image analyzed, but also Obama’s Selective Service registration form, also found to be a forgery.

Although the FBI and Congress have been aware of the posse’s investigation and its conclusions, neither has acted to discover who created the forgeries and why.  At a second press conference on July 17, 2012, during which more details were released as to the investigators’ findings, Arpaio said that Obama’s lack of authentic documentation was a “national security” issue.

Although berating Trump’s crude 2005 remarks, neither Obama nor the mainstream media has admitted that Obama included a passage using one of the same objectionable words in his book, “Dreams From My Father” about communist mentor Frank Marshall Davis, unabashedly reading it out loud in an educational forum at the Cambridge Public Library in 1995.

Davis was an admitted pedophile who behaved in a deviant manner toward women.

Obama’s denigration of Trump on Tuesday included his urging of rally attendees to vote against “misogyny” on November 8.

When husband Bill Clinton was president between 1993 and 2000, Hillary Clinton was alleged by former U.S. Secret Service agent Gary Byrne to have hurled expletives at agents, one of whom simply greeted her with, “Good morning, First Lady.”

Clinton reportedly has a sharp temper and threw a Bible at a Secret Service agent, according to Byrne.  She reportedly has attempted to intimidate a number of women who allege that her husband sexually harassed and/or assaulted them.  Bill Clinton’s admitted inappropriate relationship with a 21-year-old White House intern caused him to be impeached by the House of Representatives in December 1998 for perjury and obstruction of justice, although he was acquitted after hearings took place in the U.S. Senate.

Byrne told Fox News’s Sean Hannity that Hillary Clinton is a “very, very angry person all the time.”  “She’s a dictator,” he commented.  As a Secret Service agent at the time, Byrne said that he and other agents often whisked away evidence of Bill’s numerous affairs.

When the long-form birth certificate image was unveiled at whitehouse.gov, Trump claimed credit based upon his public insistence earlier that year that Obama prove that he was eligible to occupy the Oval Office and run for reelection in 2012.

When the media and Hillary Clinton over the past two months revived Trump’s “birtherism” as a political weapon, Trump responded that Hillary Clinton’s 2008 campaign had begun the rumor that Obama was born in Kenya and not the United States.

Article II, Section 1, clause 5 of the U.S. Constitution requires the president to be a “natural born Citizen.” Although not precisely defined in our founding documents, many scholars and researchers believe that the term limited presidential candidates to those born in the United States to parents who were both citizens at the time of the birth.

Obama claims to have been born in Honolulu, HI to a US-citizen mother and British-citizen father who later returned to Kenya when his student visa was not renewed.  On his “FighttheSmears” 2008 campaign website, he claimed to be eligible to the presidency under the 14th Amendment, which did not exist at the time the Constitution was ratified; he also claimed to be a dual citizen of Kenya and the U.S.

Most jurisdictions require an original, paper birth certificate and other documents in order to issue a driver’s license, which is then routinely used as a valid identification document when applying for a job, registering to vote, entering a federal building, and for identification at doctors’ offices.