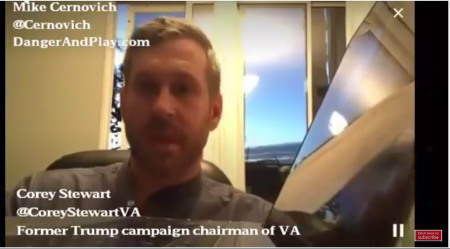 Cernovich interviewed Stewart on Periscope TV and posted it in his Twitter feed.

Stewart told Cernovich that he witnessed the RNC “not funding an ad campaign in Virginia” for Trump despite Stewart’s informed belief that the Commonwealth is crucial to whoever wins the presidency next month.  As a result, Stewart organized a protest outside GOP headquarters in Washington, DC against the RNC’s diversion of funds.  “Right after that, I was terminated by [Virginia Trump campaign co-chair] Dave Bossie as chairman of the campaign,” Stewart told Cernovich.

Stewart said he has been a Trump supporter and Virginia Trump Board member since December.  He maintained that the money Trump has been raising for the Republication National Committee (RNC) “is being siphoned off” for congressional races rather than being used for Trump’s campaign.

Over the weekend, following the release of a 2005 recording in which Trump and then-Access Hollywood co-host Billy Bush had a private discussion about women which offended many because of its vulgarity, ZeroHedge.com reported that the RNC had decided to divert “victory ” funds away from Trump “to down-ballot candidates.”

When asked by Cernovich, Stewart said he does not know who released the recording to The Washington Post but that he “would not be surprised” if it were RNC operatives or if not, that “they knew” that its releases was imminent.

The Twitter hashtag #GOPSabotage appears to report that a 2012 Romney/Ryan poster is prominent in GOP headquarters in Ryan’s home state of Wisconsin.

Stewart said that after the Republican “establishment” reportedly said it would work with Trump once he secured the nomination in July, “Essentially, Mr. Trump was betrayed” (9:32).

Dan Senor, an aide of Ryan’s, has not denied having leaked the tape.  Senor is a former Romney adviser and is married to former NBC and CNN reporter Campbell Brown.

Brown is now involved in a project involving education.  Tweets about the leaking of the tape have been directed at Brown.

At 18:08 in the broadcast, Cernovich called Charles C. Johnson of GotNews.com, who repeated Stewart’s claim that the “GOP has taken over Trump’s campaign and they’re sabotaging him,” to which Johnson said, “Oh, yeah, this has been in the works for quite some time…”

Johnson said that “a lot of the neocons” and “NeverTrumpers” are behind “the strategy” to leak the Trump/Bush recording as “a vehicle” to “get Paul Ryan to come out against Trump.”

“This is a stab in the back; this is clear sabotage,” Johnson said.  “This is a clear betrayal.”

Ryan was one of the first Republicans to denounce Trump for the 2005 conversation, followed quickly by 2012 presidential nominee and strong Trump opponent Mitt Romney.  A considerable number of congressmen quickly joined them.

When asked, Johnson told Cernovich that the tape “comes from the Bush crowd.”  “I know for a fact that it did not come from the Hillary Clinton campaign,” he continued, identifying “GOP advisers and consultants” as the leakers.

For his part, Trump said on Tuesday of Ryan, “I don’t want his support, I don’t care about his support.”  Yahoo! News reported of Trump, “Declaring himself unchained from party strictures, the White House nominee berated Republican leaders for offering ‘zero support’ and promised a bareknuckle 28-day campaign against Hillary Clinton.”