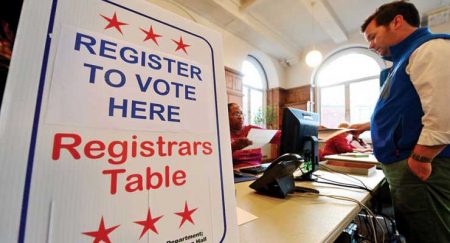 (Sep. 30, 2016) — Thanks to a ruling by the US District Court, Election Day in-precinct voter registration has been canceled in Illinois, at least for now.

In 2014, during the lame duck session preceding Governor Rauner’s term, Illinois Democrat legislators passed—and Governor Quinn signed—a law that requires Election Day in-precinct voter registration in some election jurisdictions. This law required election jurisdictions with a population of 100,000 or more to allow people to register or update their registration status at their home precinct’s polling place on Election Day. This same right was not given to the smaller counties. This means there would have been 90 counties in Illinois where voters could not register in-precinct on Election Day. Rural voters would have to go to the centralized voting center that each county is required to have open on Election Day for new voters to register and vote.

Liberty Justice Center, an affiliate of the Illinois Policy Institute, filed the lawsuit. The decision by US District Court Judge Der‑Teghiayan, who called this law unconstitutional, will have a substantive impact on the elections. In the March 2016 Primary, 110,000 voters registered to vote in their polling places on Election Day. The lawsuit argues this gives a real advantage to the more populated election jurisdictions; voters in rural counties have to arrange to travel to the centralized voting center, compared to registering and voting in the neighborhood polling place.

Not surprisingly, Attorney General Madigan has already notified the US District Court of her intention to appeal the decision. Even if the decision by Judge Der‑Teghiayan is overruled, it seems unlikely the decision will be overruled completely. The argument is solid. Voter registration allowed in some precincts and not others creates a disadvantaged playing field. Legally, the damage is irreversible, and it is clearly unconstitutional.

Madigan’s appeal will likely assert blocking the law so late in the game will disadvantage voters who might have thought they could register on Election Day. I am not a lawyer, but I believe the requirement for a level playing field will prevail and a remedy can be found for these voters. They can go to the centralized voting center just like rural voters do.

The judge’s decision does not prevent cities from opening more centralized voting centers to allow for increased access throughout the election jurisdiction, but the late timing makes it challenging to do so.

This late changing development presents a difficult dilemma for the 20 election jurisdictions involved.  They must continue to prepare for in-precinct voter registration in case the court reverses the ruling on appeal, yet they also need to prepare for a potential influx of voters on Election Day at their centralized voting centers.  In theory, the court could rule the night before the election to reverse the ruling… Consequently, at this point, these 20 election jurisdictions must mobilize for both scenarios.

From a security perspective, this means that there will be additional ballot security challenges at the polling places.

The election jurisdictions have had their budgets approved and they have staffed up for this in-precinct voter registration initiative. These 20 jurisdictions were already under tough challenges to get the kinks worked out before the November election, where turnout could rival 2008. Special election judges and voter registrars are already hired and are now being trained. Their training will have to be altered. The election jurisdiction must now shift this temporary staff to work at centralized voting centers and perhaps be re-assigned to other roles such as election judges or polling place administrators. In the larger counties, this ruling impacts thousands of temporary workers. In Cook County, which includes both Chicago and Suburban Cook County, at least 7,500 temporary workers are involved in the Election Day in-precinct voter registration process.

Software that administers and processes the vote will also need to have last minute code changes. Election machines set up to permit voters to register to vote at the polling place will need to be reset and re-tested. The impact of this decision is huge!

This is an election year that is different in many ways, and it just got more interesting in Illinois! This really demonstrates the importance of having poll watchers present at the polling places to ensure an honest vote.

Judge Der‑Teghiayan states in his opinion:

In the instant action, the Plaintiffs have provided ample evidence showing that the availability of polling place registration as part of the EDR results in a significant increase in voter turnout. That in turn shows that in a low population county without electronic polling books there will be a significant disadvantage under the EDR as it stands in Illinois. The EDR would severely burden their right to vote. Defendants argue that the availability of polling place registration is merely an inconvenience because EDR will still be available in all counties in certain location other than polling places… The polling place registration option is applied in an arbitrary and disparate fashion among low population counties in Illinois and is not the type of “[o]rdinary and widespread” burden that was considered not to be severe… While it may be true that the polling place registration option can assist voter in certain populous counties, that option cannot be provided at the expense of lower population counties, thereby decreasing their political representation in Illinois. The application of this legislation favors the urban citizen and dilutes the vote of the rural citizen…While it is a desirable goal to make the voting process more readily available to United States citizens in Illinois and to encourage them to vote, that goal must apply equally to all United States citizens in Illinois.