“THANKING YOU MOST KINDLY” 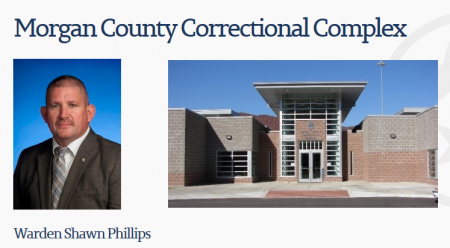 (Sep. 19, 2016) — In a July 30 article titled, “Can Prison Wardens Be Criminally Charged for Inmate Injuries Occurring Under Their Watch?” The Post & Email published a detailed letter from TDOC inmate Richard Mayers, who had written us three successive letters over a short period of time relating a vicious beating he allegedly suffered at the hands of four correction officers at the West Tennessee State Penitentiary (WTSP) in Henning.

In that article, The Post & Email cited a law in Tennessee Code mandating that prison wardens see that their staff “treat the inmates with humanity and kindness.”

WTSP is colloquially known as “West High” and is one of Tennessee’s most dangerous prisons. It is currently home to Walter Francis Fitzpatrick, III, who is serving the third year of a three-year sentence for “aggravated perjury” and “extortion.”

In one of his three letters, Mayers described having been “beaten bloody, my left eardrum busted by a facist assistant warden, his chief of security and two other members of his gang (from top in rank) AW Johnny Fitz.”

The Post & Email has seen documentation indicating that a “Johnny Fitz” is employed at WTSP.

Mayers also reported having been purposely poisoned in his cell by prison guards using a rodent or insect extermination preparation which he reports has progressively impaired his memory and ability to write.

Mayers is 53 years old and confined to a wheelchair most of the time.

A similar occurrence was reported in June as to WTSP inmate John McCloud after he was allegedly been knocked unconscious by six guards.  McCloud was reportedly then placed in the medical section of the prison in draconian conditions based on the determination that he required suicide intervention.

A letter The Post & Email wrote to McCloud in early July was not answered.  When we spoke to McCloud’s mother in mid-June, she was unable to reach him or glean information as to his physical condition from prison staff.

After publishing our article about Mayers, we sent hard copies not only to Mayers, but also to WTSP warden Jonathan Lebo.

We heard nothing from Mayers for more than a month, but in a letter received on Friday, he related that he has been moved to the Morgan County Correctional Complex (MCCX) in Wartburg.

In his letter, Mayers wrote of the new facility, “…it has about 12 new units and 2 of them are used for elderly + wheelchairs, ect-ect. they have a far supperior medical dept however they still have to answer to to director of Centurion Health Services in Nashville. I need medical procedures M.R.I.-numerous-blood-test, ect. my hemogloben is low and I believe it is from the intentional poisoning at WTCX (west high).” [sic] 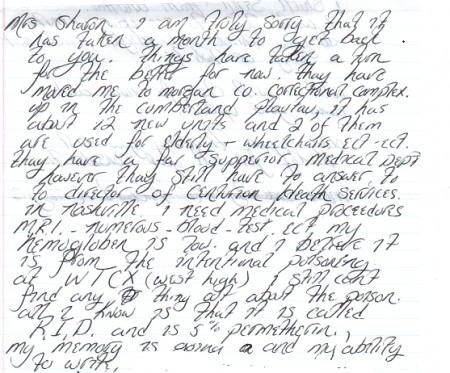 He also appeared to indicate that he had not received the hard copy of the article we enclosed with an August 1 letter sent to him at WTSP.

TDOC Communications Director Neysa Taylor has denied that correction officer brutality, lack of medical care or cruel and unusual punishment exist at any of Tennessee’s prisons, including those run by Corrections Corporation of America (CCA), a private company which considers the TDOC to be its “longtime trusted partner.”

Mayers’s last paragraph on the back of the letter states, “once again thanking you most kindly for all your consideration.”

His letter closes with, “most sincerely Mr. Richard A Mayers.”

Update, 9:20 p.m. EDT:  A letter was received from Mr. Mayers following publication of this article indicating that he finally received the mailing with the copy of the article we had mailed to him on August 1.

One Response to "Inmate Who Claimed Beating, Shattered Eardrum Relocated"