“A REAL THREAT TO NATIONAL SECURITY” 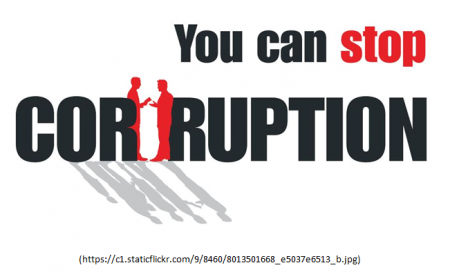 (Sep. 14, 2016) — Corruption is a negative phenomenon familiar to all countries of the world. Believe it or not, the only possible condition for true prosperity is the absence of corruption. After all, it has a corrosive effect on all sectors of society – economic, social, and political. The negative consequences arising from this phenomenon prevent the progressive development of society and are a real threat to national security.

It would be wrong and erroneous to compare corruption to a banal bribe, which is only one of the numerous forms of this crime, including getting material and legal advantages by circumventing the law to one’s advantage. Corruption is nothing else than the use of public functions for the private interests contrary to the public interests and interests of national security. It:

Undoubtedly, corruption is a worldwide problem since it’s typical to all modern nations, regardless of their level of economic development. And it’s always high when the country is at a stage of modernization, restructuring, or change of government. These processes actualize the need for a stronger response to corruption-related crimes.

Low wages of civil servants, as well as a large number of injunctions and high powers in influencing the activities of firms and citizens, are one of the greatest reasons for corruption. It is everywhere where officials have wide powers to dispose of any scarce goods.

As for the institutional factors, we can name a high level of secrecy in the work of government departments, the cumbersome system of accountability, and lack of transparency in the legislative system.

The main socio-cultural factors are the demoralization of society, lack of awareness and organization of citizens, as well as the passivity of society in relation to self-will of the powers that be.

So, how to beat corruption? There’s no better way than to turn to the experience of the most successful countries that have almost eradicated this phenomenon.

In 2015, Danes were asked if they had ever faced corruption. Only 3% of the citizens answered positively.

The Danish International Development Agency has a hotline that takes complaints about corruption. The complaints are thoroughly checked and the perpetrators punished.

Denmark tightens penalties for corruption almost every year. For example, last year the Danish Parliament adopted the rate at which criminal penalties for bribery in the public sector increased twice, from three to six years!

New Zealand’s government policy is conducted in such a way that citizens get “vaccinated” against corruption from infancy. There are a lot of institutions that reveal corruption, including the Serious Fraud Office, which has virtually unlimited power. The representatives of SFO may require any document from any New Zealander, from a janitor to a minister.

New Zealand’s journalists track every dollar on the accounts of officials and politicians, regularly publishing their spending on apartments, cars, clothes, watches, hotels and even restaurant bills. Therefore, even the slightest corruption scandal ends with dismissal from official posts.

Moreover, there are special anti-corruption training courses that describe in detail what to do and how to complain if you have documented  evidence of bribery or fraud.

One cannot say that Finland has a formula to combat corruption. There is no special law or state body to control corruption. But there is no corruption, either! How is that possible?

The key is the right mentality. Citizens do not offer bribes, while officials do not take or require them. Journalists are an effective instrument of civilian control, partially because all of the facts presented by them are rechecked.

Ministers, judges, and prosecutors are not untouchable. Over the past decade, six ministers and 23 senior government officials were fired and punished in accordance with law.

At the beginning of the 21st century, Sweden started introducing an anti-corruption policy, simplifying the access of citizens to state documents and changing taxes, benefits, and subsidies.  Sweden has taken the course for a fair justice system. All officials went through the “ethical” illustration. An official who spends more than officially earns cannot be honest a priori. Quite a reasonable statement, isn’t it?

Lee Kuan Yew completely rooted out corruption in 40 years. However, the first results were visible in the first two years of anti-corruption reforms, which consisted of five basic steps:

Summing up, achieving an effective response to the phenomenon of corruption is possible only when bringing together the efforts of all public institutions of each country. Only then can the state realize the national idea of becoming one of the most competitive and transparent countries in the world.

Lucy Adams is an essay writer, a blogger, and a loyal user of https://bestessay4u.co.uk/. This open-minded researcher is ready to bring your best ideas to life, so don’t miss the chance to start a fruitful collaboration! Supply Lucy with a list of your suggestions and let her choose one or a few for research. By the way, all blog posts are free.

How to Beat World Corruption added on Wednesday, September 14, 2016