“PIN THE TAIL ON THE DONKEY” 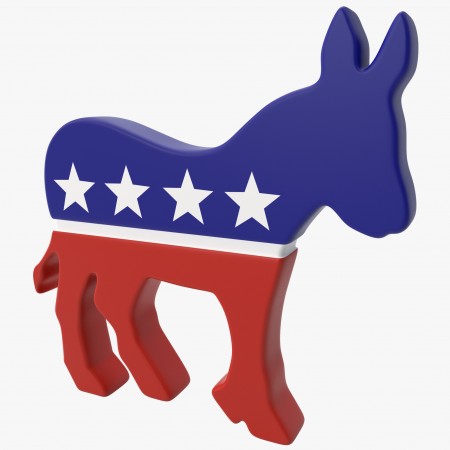 (Sep. 10, 2016) — At an August 25 rally in Reno, Nevada, Hillary Clinton made what was a feeble attempt at blunting Donald Trump’s outreach to African-American voters.  In her remarks she referred to recent news reports in which former Klansman David Duke is said to have endorsed Trump’s candidacy.  Attempting to cast doubt on Trump’s sincerity, she said, “Trump refused to disavow the support of David Duke, a notorious former leader of the Ku Klux Klan.”

It was a major unforced error.  Coming from a woman who has reportedly received $20,000 in contributions from KKK members in recent months, her attempt to tie Trump to the Klan can only serve to discredit her and to draw attention to the Democratic Party’s sordid racial history.

When asked by reporters about his reaction to the Duke endorsement, Trump replied, “I didn’t even know he endorsed me.  David Duke endorsed me?  Okay, all right.  I disavow, okay?”  His response was a far cry from Hillary Clinton’s warm embrace of the late Senate Majority Leader Robert Byrd (D-WV) upon his death on June 10, 2010.  On that occasion, Clinton heaped praise on the former Grand Kleagle of the West Virginia KKK, saying, “Senator Byrd was a man of surpassing eloquence and nobility…  It is almost impossible to imagine the United States Senate without Robert Byrd.  He was not just its longest-serving member; he was its heart and soul.

“From my first day in the Senate, I sought out his guidance, and he was always generous with his time and his wisdom.  I admired his tireless advocacy for his constituents, his fierce defense of the Constitution and the traditions of the Senate, and his passion for government that improves the lives of the people it serves…”  She concluded by saying, “Robert Byrd led by the power of his example, and he made all of us who had the honor of serving as his colleagues better public servants and better citizens.  After more than five decades of service, he has left an indelible imprint on the Senate, on West Virginia, and on our nation.  We will not see his like again.”

Coming from a woman who sees herself as the “champion” of the poor and underprivileged, her endorsement was overly generous for a man who had once recruited some 150 of his friends and acquaintances to create a new chapter of the Ku Klux Klan in Sophia, West Virginia.

As Clinton attempted to tie Trump to former Klansman David Duke, it was learned that another prominent Klan leader, Will Quigg, Grand Dragon of a California branch of the KKK, has raised some $20,000 for the Clinton campaign and that the Klan is officially endorsing her for the presidency.  News reports tell us that, shortly after participating in a giant cross-burning in Georgia, Quigg submitted to an interview with Vocativ, a highly-respected media technology company.  In that interview, Quigg is quoted as saying, “She is friends with the Klan.  A lot of people don’t realize that… For the KKK, Clinton is our choice.”

If David Duke is, or was, a Klansman, he must have been a very lonely man because the KKK is, was, and always has been an all-Democrat organization.  Because the Republican Party was born in 1854 as an anti-slavery party, white Republicans were never welcome in the Klan.  However, since Hillary Clinton has introduced the Klan into the 2016 presidential campaign, I have taken the opportunity to review my copy of The Lynching Calendar, compiled largely from Tuskegee Institute records and various news archives by autopsis.org.

Turning the 119 pages of The Lynching Calendar is a most troubling experience.  Each of those pages contains names, places, and dates associated with at least 25, sometimes hundreds, of atrocities in which blacks and white Republicans were violently murdered by the Klan.  Looking at page after page of those names, it is impossible to imagine the horrors they experienced.  And while nearly half of the 6,613 victims listed were blacks and white Republicans, all identified by name, some 3,690 are described only as “unidentified” black men, women, children, and infants.

In the days and weeks following the Orlando, Florida, nightclub killings of June 12, 2016, in which a lone Islamic terrorist murdered 49 people, many members of the mainstream media described the terror attack as one of the greatest, if not the greatest, mass murders in U.S. history.  They failed to recall that, in October 1868, Klansmen murdered 63 African-Americans in New Orleans, Louisiana, some 200 in St. Landry Parish, 162 in Bossier Parish, and 42 in Caddo Parish, Louisiana.  They also failed to mention that, during the months of May and July, 1917, Democrat Klansmen murdered some 130 black citizens of East St. Louis, Illinois.  They failed to report that on October 1-2, 1919, the Klan murdered some 200 blacks in a mass killing in Elaine, Arkansas.  And they failed to report that, on May 31, 1921, some 150 blacks were killed in a major race riot in Tulsa, Oklahoma.

But of all the murders committed by partisan Democrats in the 100-year period between 1865 and 1965, one of the most gruesome atrocities occurred in Valdosta, Georgia, on May 17, 1918.  On that day a black woman named Mary Turner announced that she would see to it that the white men who had lynched her husband would be prosecuted.  Turner was nine months pregnant at the time.  She was dragged from her home, tortured, and hanged.  And while she was still alive, dangling from the rope, they slashed open her abdomen.  Her unborn child spilled out onto the ground where they crushed the baby’s skull with the heel of a boot.  Mary Turner’s mistake was that she thought the rule of law was available to her.  She became a threat to the white Democrats who had lynched her husband and she paid for it with her life and the life of her child.

The Black Codes and the Jim Crow laws were overturned with the passage of the Civil Rights Act of 1964.  But even then, passage of the Act required the strong support of Republicans.  In the House of Representatives, Democrats voted 153-41 (63%) in favor of the bill, while Republicans voted 136-35 (80%) in favor of the bill.  In the Senate, the bill was approved by Democrats by a vote of 46-21 (67%), while Republicans voted 27-6 (82%) on final passage.

It is interesting to note that the Civil Rights Act of 1964 was essentially identical, word for word, to the Republicans’ Civil Rights Act of 1875, which Democrats had declared unconstitutional when they gained control of the U.S. Supreme Court in 1883.  Mrs. Clinton might also wish to consult her husband on the question of the Civil Rights Act of 1964, since both of his political mentors, Senators J. William Fulbright (D-AR) and John McClellan (D-AR), along with Senator Al Gore, Sr. (D-TN), opposed passage of the Act in the Senate.  In fact, Senators Fulbright and Gore participated in a filibuster designed to prevent its passage.

Demonstrating that he was no less fond of segregationists than his wife, Bill Clinton said on June 5, 1996, at a White House dinner honoring the memory of Senator Fulbright, “Hillary and I have looked forward for some time to celebrating this 50th anniversary of the Fulbright Program, to honor the dream and legacy of a great American, a citizen of the world, a native of my home state and my mentor and friend, Senator Fulbright.”

By attempting to tie Donald Trump to the KKK, citing the David Duke endorsement, Hillary Clinton is merely employing one of the favorite ploys in the Democrat Party playbook… i.e., to always accuse Republicans of doing that which Democrats, themselves, are doing.  For example, during U.S. Senate debate on The Repeal Act of 1894, Democrats gave strong support to a provision in the law that would have removed all federal marshals stationed across the South to guarantee voting rights and other civil rights for blacks.  Just before the final vote on February 7, 1894, Senator George Hoar (R-MA) threw down the following challenge to Democrats:

“Mr. President, this is a question of fraud or no fraud…  If you will produce me a citizen of the United States, a Democrat, who lost his honest vote in consequence of intimidation or impediment created by these United States marshals, I will find on record here the proof of ten thousand Republicans who have lost their votes by Democratic practices….

“Mr. President, the nation must protect its own.  Every citizen whose right is imperiled, if he be but one, when it is a right of national citizenship and a right conferred and enjoyed under the Constitution of the United States, has the right to demand for its protection the entire force of the United States until the Army has spent its last man and the Navy fired its last gun.  Most of us have nothing else than the right to vote….  The urn in which the American casts his ballot ought to be, aye, and it shall be, as sacred as a sacramental vessel.”

In the 122 years, 7 months, and 3 days since Senator Hoar threw down that gauntlet, no Democrat has had the courage to take up his challenge.  Perhaps it’s time for Republicans in 2016 to renew that challenge.  For every Republican Klan member Democrats can identify, Republicans will produce a thousand Democratic Klan members.  And since Barack Obama is so fond of apology tours, perhaps he could be persuaded to spend his remaining days in office apologizing for the thousands of African-Americans and white Republicans systematically murdered by members of his party.  It’s time to “pin the tail on the donkey.”