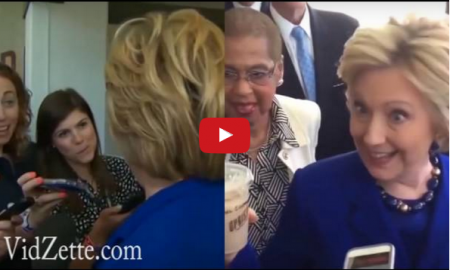 A three-part radio interview with Noel on the subject is posted toward the bottom of the page.  Shortly after being introduced in the first radio clip, Noel confirmed that he is a board-certified anesthesiologist and retired three years ago.

Following the introduction, Noel told the host that there is only one known medication for Parkinson’s, Levodopa, but that the disease is progressive and debilitating.

Levodopa has side effects including “confusion,” “nausea,” “lightheadedness,” and other symptoms.

During the interview, Noel noted the several falls which Clinton has suffered, including when she broke her elbow in 2009 and that which resulted in a concussion in December 2012.  He also mentioned a “swallowing disorder” associated with Parkinson’s which could be causing Clinton’s coughing episodes.

The host then asked if Clinton’s coughing indicates that her illness is “advanced,” to which Noel responded, “It’s fairly advanced” (17:52).

In Part 2 of the interview, Noel describes in detail “off-times” which occur with Parkinson’s, with the host speculating that Clinton’s absences from the campaign trail and notable tardiness to a primary debate last December resulted from such events.

At the time, The New York Times reported that there was “not a lot of wiggle room” in regard to the amount of time Clinton had to emerge from the ladies’ room to take her place at the debate podium.

According to WebMD, Parkinson’s “affects the nerve cells in the brain that produce dopamine. Parkinson’s disease symptoms include muscle rigidity, tremors, and changes in speech and gait. After diagnosis, treatments can help relieve symptoms, but there is no cure.”

According to the National Institutes of Health (NIH):

Parkinson’s is a disease of the nervous system that mostly affects older people. It typically begins after the age of 50. The disease can be very hard to live with because it severely restricts mobility and as a result makes daily activities increasingly difficult.

Parkinson’s is a progressive disease, which means that in most cases it will continue to gradually get worse. Many people who develop Parkinson’s will require nursing care. There is no cure for the disease and its exact cause is not known, but there are effective treatments that can relieve the symptoms.

Prior to hearing the radio segment, The Post & Email located what it believed was Noel’s office in Orlando, FL and left a message requesting an interview.

In a five-minute video posted on September 6, Noel says, illustrating with media footage of Clinton and actor Michael J. Fox, who is known to have Parkinson’s, that although in “intensive medical management,” Clinton’s posture, hand gestures, head-bobbing, “freezes,” and at-times “bug-eyed” appearance belie that she has Parkinson’s.

In June, Clinton was noted by many observers to suddenly bob her head back and forth when surrounded by a gaggle of reporters which ended in her failure to answer the several questions posed to her simultaneously.  On August 8, The Washington Post’s Dave Weigel, who attempted to discount internet rumors about Clinton’s health in his piece, wrote that “The reporters, who had covered Clinton for a year, interpreted her exaggerated head-bobbing as a joke at how she’d been suddenly surrounded — and as a successful attempt at ending the scrum. It did not occur to them that it would become seen as evidence of a ‘seizure,’ as people suffering from seizures do not typically laugh and continue to hold cups of coffee.”

Weigel also scoffed at others’ observations of what Noel describes as “freezing” and Secret Service agents apparently assisting her to climb stairs at a South Carolina home in February of this year.  While Weigel contends that Clinton had “slipped on the stairs,” another woman behind Clinton and her assistants in the photo is wearing high heels.

While this writer is not a trained medical professional, she has for many years observed tens of thousands of seizures in a family member for whom she is primary caretaker. Her observations include the fact that a seizure can encompass giggling or laughing but that indeed, during a seizure, it would be difficult for the person to maintain his hold on a cup of coffee or any other object.

When this writer first saw the video showing Clinton’s head-bobbing, she did not interpret it as a type of seizure. Dr. Noel explains the movement as a “Parkinson’s freeze.”

Noel believes that Parkinson’s is the reason that Clinton has not given a press conference in the greater part of a year.

On September 4, The Post & Email noted that Clinton’s campaign appearances are limited, with surrogates and family members often scheduled to appear without her.  WND and others have reported that a certain man who might be a Secret Service agent is particularly close to and watchful of Clinton while at the same time, exhibiting unusual physical contact.  “He touches her frequently, wrapping his arm around her or helping her up stairs, and responds immediately when Clinton has one of her coughing fits,” WND wrote on Thursday.

On Friday morning, a post apparently published by PRNewswire, a press release distribution service, titled “Hillary’s Health Concerns Serious, Say Most Doctors Polled by the Association of American Physicians and Surgeons (AAPS) yielded an error message for a time which eventually resolved itself. 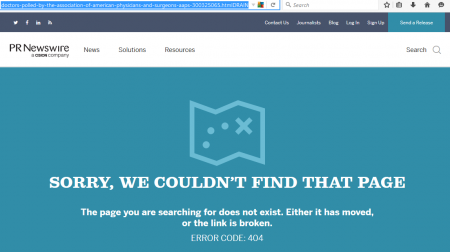 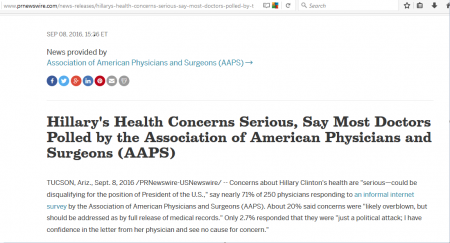 PRNewswire is a paid distribution service, as The Post & Email confirmed with a company representative this morning by telephone.

At the 37-second mark of a 16-minute video, Noel reminds the audience that in mid-August, Infowars reporter Joe Biggs reported that he met in person with several Secret Service agents who allegedly disclosed that Clinton “was suffering from Parkinson’s disease” and had had it “for an extended period of time.”

Noel then stated that emails released by Wikileaks revealed that Clinton had asked aides at the State Department “to research new drugs to treat Parkinson’s disease.”

An email published by Wikileaks dated October 24, 2011 between Jacob (Jake) J. Sullivan and Clinton contains information about the drug “Provigil (Modafinil),” which Sullivan provided was “used to treat excessive sleepiness caused by narcolepsy or shift work sleep disorder (sleepiness during scheduled waking hours among people who work at night or on rotating shifts). It is also often prescribed to treat excessive sleepiness in patients with Parkinson’s, Alzheimer’s, and multiple sclerosis. Additionally, it has also gained a following among students, truckers, and others who want to stay awake for extended periods of time. o Modafinil was developed by the French firm Lafon and was approved by the FDA to treat narcolepsy in 1998. It is now sold under the brand name Provigil by the Pennsylvania drugmaker Cephalon.”

Provigil is considered a “controlled substance.”

Three other Wikileaks emails containing the search term “Parkinson’s” are unrelated to the medical condition.

On February 1, 2005, Clinton, then a U.S. Senator from New York, passed out while attending a luncheon, with the explanation that she had had a “24-hour virus.” At the time, CNN reported:

“She has had a GI virus — an acute gastrointestinal illness — and she has been sick for at least a day and she needed some fluids; she needed to sit down and relax,” Pincus told a reporter for television station WIVB.

“She had clearly consulted with physicians beforehand,” Pincus said. “She came in, she said she wasn’t feeling well. She felt hot. She had stepped out to remove some of her heavier clothing, and it was just too much for her to continue.”

Pincus predicted the senator would feel “much better within the next 24 to 48 hours.”

Clinton also was said to have fainted as a result of a stomach virus in December 2012 when she reportedly fell, hit her head and suffered a concussion.  ABC News later quoted Hillary’s husband, former President Bill Clinton as having said “that his wife’s injury ‘required six months of very serious work to get over.'”

“They went to all this trouble to say she had staged what was a terrible concussion that required six months of very serious work to get over,” he said. “It’s something she never low-balled with the American people, never tried to pretend it didn’t happen.”

But Bill Clinton’s timeline appears to differ from official comments from the State Department at the time.

In early 2013, The Post & Email submitted a request under the Freedom of Information Act (FOIA) for a transcript of the 911 call presumably made to secure Clinton’s transport to the hospital following her December 2012 fall but was denied access on the grounds that there was “no public interest involved.”

Reports differed on whether Clinton fell while at home or at the State Department.

The Post & Email has additionally contacted the Clinton campaign to request comment on Noel’s 16-minute video, a link to which we provided.

Wikileaks has promised more documents to be released about Clinton but has thus far not hinted at the topic of their content.

Republican presidential nominee Donald Trump has called upon Clinton to release her full medical records, while Clinton continues to challenge Trump to release his income-tax returns.

Some believe that both candidates should release both types of records.  Clinton and her running-mate, Sen. Tim Kaine, have released their tax returns, while Trump has claimed that his remain under IRS audit.  Running-mate Mike Pence has pledged to release his soon and that Trump will release his returns as soon as the audit is completed.

Trump has claimed that while he is out campaigning heavily, Clinton “lacks stamina.”

11 Responses to "Does Hillary Clinton Suffer from Parkinson’s Disease?"