IS THE MEDIA FOCUSING ON DEFEATING TRUMP? 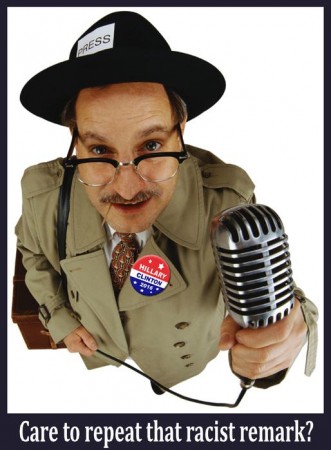 (Aug. 11, 2016) ~TPATH~ As we mull over some of the finer moments and landmark achievements of the past eight years, and if we can do it without suffering cardiac arrest, we might wonder whatever has happened to that classy professional division of the media called investigative journalism.  Fear not, my good friends, they have not died, they have not moved on to real jobs.  They took an eight-year vacation.

But hey, they’re back.  All around the country, they have begun to slither into press rooms and editorial staff meetings.  The long hiatus has come to an end as brusque -faced journalists gradually crawl from their cobwebbed retreats to begin charging up the old handheld devices, fine-tuning talking points and brushing up on the tried and true rules for radicals.

It appears that the usurpation of our government by Barack Islam Obama and his leftist, America-hating ideology may be about to come to an end.  Now, finally, the media can get back to work. Back to doing what they do best.  That is, creating deception and interfering with anything and everything that will heal an ailing America.  With the Democrats in power, there simply has been no work to do, nothing to investigate, nothing to inquire about.  No scandals, no treachery, no treason, no extortion, no bribery, no collusion with terrorist governments, no gun sales to drug lords, no forged birth certificates, no unfortunate drownings of Hawaiian officials, no nothing.

Not so now.  This Donald Trump guy sure looks to be providing fertile ground for investigative journalism.  A multi-layered and nationwide examination of Mr. Trump would serve two purposes, the most important of which will be to get him to fear that every word he utters will be twisted and distorted.  Using the special privileges[DK1] [DK2]  awarded to them by the Founding Fathers, the snakes have crawled out of their dank holes a bit early to begin anew the devastation of a conservative candidate.  Having over the years pretty-much culled their ranks of any lingering closet conservatives and anyone else with an ounce of integrity, they are now ready to go back to work.

For those who may not be aware, the Founders knew that for a free nation to endure, the government must be prevented from interfering with the press.  As a result of this declaration in the First Amendment, courts have regularly protected individual journalists and media organizations from being prosecuted or sued for misleading or erroneous reporting.   The Founders certainly did not anticipate that the entirety of the media would become a branch of the government.   The mouthpiece for and the propaganda wing of the government, when the leftists are in power.

The press can and does, on a daily basis, subvert and bastardize the rights of the press that so many Americans died to provide and preserve.  The press has become the very government the Founders dreaded.  The modern media has undermined a constitutional right provided by the Founders which had the intent of protecting the people from government and have turned it into a tool of tyranny, for the government.

What they are doing unfortunately is far from new.  They ignore or barely cover the most egregious crimes, lies, misdeeds and destructive policies of the left while building mountainous misrepresentations out of the tiniest conservative mole hills. These vicious fabrications are more than just an effort to create an untrue intent or scenario.  They are much more repellent and treacherous than that.   They are meant to shut up the opposition.  They are meant to force fear into the spineless politician thereby preventing him from getting his message out.  They are meant to infringe on the First Amendment.

For example, how many times have we heard from not just the RINOs but also those who are supposedly in support of Trump that he needs to “stay on message, tone it down, don’t give the media an opportunity to attack”?  That he needs to be very careful of what he says and how he says it.   Intentions good or not, these people are either stupid or ignorant of leftist tactics.   If they have not seen nor realized that it does not matter a whit what or how Trump says anything, the press is free to declare it, offensive, racist or xenophobic.  That means, my good friends, he can say nothing.

The only way for Trump to avoid having his words twisted, redefined and misapplied is for him to keep quiet and only read from a well-prepared, watered-down and Democrat-friendly speech.  In other words, shut up!  How many times will the Republican establishment play this losing game?  Apparently there is no limit.  If you care to take a stroll down memory lane, recall the exceptional success they had in their handling of McCain and Romney.  Donald Trump will not acquiesce.  He will not shut up and sit down.  Win or lose he is a man, a leader and he will not be deterred from saying and doing what needs to be done.   If the American people are not ready for that, it will be too bad for this country.  But, it appears they are.

The Republican establishment has been infected by the disease of political cowardice and has been for many years.  The game plan of the leftist scoundrels has been effective and the Republicans intend to not stop that streak. In fact, they are trying to infect our candidate, our leader, our nominee with the same “yellow fever” that has long ago melted their spines.

As the excitement rises and the thrill of the hunt grows, the media is poised to once again shut down and shut up the opposition.  But hold on, there’s breaking news.  Donald J. Trump is immune.  His DNA and genetic code repels weakness and fear.  He will Make America Great Again.