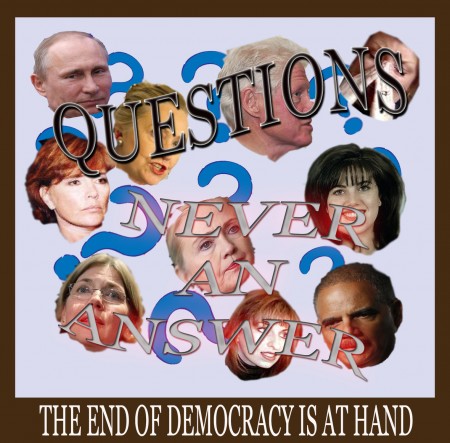 (Jul. 28, 2016) — The Democratic Convention has been the focus of this week’s news. As one would expect, the progressive organization has been doing its best to paint Secretary Clinton in a favorable light, while casting aspersions upon their competition. This is typical campaign rhetoric and is taken with a grain of salt – all to our discredit. As a people, we have become numb to the half-truths all politicians speak and the spin that twists reality into unrecognizable knots. Part of the problem we face is that so many accept campaign speeches from their favored politician without asking the questions that should be obvious. So,  this writing will serve as a stimulus for their dulled collective consciences.

The first person that should be questioned is President Bill Clinton, the man who probably is very anxious to once again reside at 1600 Pennsylvania Avenue – for reasons that may be unsuitable to print. In his convention speech, President Clinton did his best to paint his wife as a compassionate, accomplished person who stole his heart from the moment he first laid eyes on her.

Really? So then let’s ask President Clinton this: If Hillary is the light of your life, then why Paula Jones, Monica Lewinsky, Kathleen Willie, Gennifer Flowers, etc., etc., etc.?  And another question for you, Mr. President: If our first woman to be a member of the Armed Services Committee was so accomplished, then why is our VA such a mess and in some cases, our veterans dying in line waiting for treatment? One more thing, Mr. President: If your wife was such a positive force in foreign affairs, how do you explain Libya, Egypt, Syria and the downfall of Iraq, which President Bush’s surge had experienced success with?

And Mr. Obama, I have a question for you as well. In a recent interview, you inferred that President Putin leaked those emails because of his support for Donald Trump? So, are you really saying that the person or persons who leaked the emails are more important than the person or persons that wrote them? Do you think that the intentions of one of our country’s major political parties are something that should take a back seat? If this is what you think, then did you think that the real culprits in President Nixon’s Watergate scandal were the reporters that exposed the activity? I guess you also think Nixon’s secretary was acting properly when deleting those famous minutes from recordings that may have been convicting? After all, you have had little to say about Secretary Clinton’s deletions, as well as the Democratic Party’s? In the same vein, you provided Executive Privilege for Eric Holder in the Fast and Furious incident and did not prosecute Lois Lerner? So, do you think that the commission of an act is acceptable but reporting it isn’t?