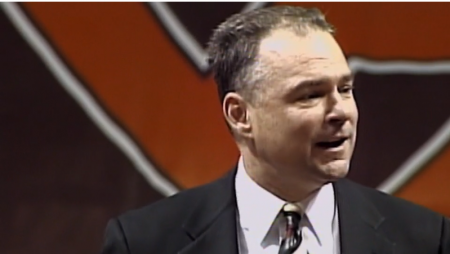 (Jul. 27, 2016) — Following the airing of a promotional biography video of Democrat vice-presidential nominee Tim Kaine, the nominee himself was introduced to a standing ovation at the Democrat National Convention in Philadelphia on Wednesday night at 10:00 p.m. EDT.

After greeting the audience, Kaine said that his son Nat deployed overseas with his Marine contingent “just two days ago” to serve with NATO troops.

Kaine is currently a U.S. Senator from Virginia and formerly served one term as the commonwealth’s governor.  He also served as a Richmond councilman and lieutenant governor.

The video reminded those watching that Kaine was governor during the Virginia Tech shooting which killed 32 teachers and students in 2004.

Of his vice-presidential nomination, Kaine told the audience, “I never expected to be here.”

He was born in Minnesota and grew up in Kansas City, MO.  His parents are in the audience.

He said that when he graduated from high school, he wanted to “battle for social justice.”  “I taught kids how to be welders and carpenters,” he said of his year in Honduras, breaking into Spanish and saying that “We are all Americans.”

Kaine said that he believes in “opportunity for everybody” regardless of faith or “who they love.”

His wife Ann’s parents are also in attendance, “90-plus and still going strong.”  Ann’s father, A. Linwood Holton, was the Republican governor of Virginia from 1970 to 1974.

At 10:18, Kaine praised Sen. Bernie Sanders, with whom he has worked on the Budget Committee in the Senate, which was met with chants of “Bernie!  Bernie!”

“We must love our neighbors as ourselves,” Kaine said, praising the cultural diversity of Americans.  “Love” has been a common theme of the convention.

Kaine then spoke about why he “trusts Hillary Clinton,” which he said is based on her “accomplishments.”

At 10:25 p.m., Kaine said that he “trusted Hillary Clinton with our son’s life,” speaking of the son who just deployed.