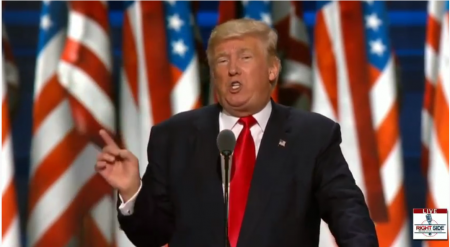 (Jul. 21, 2016) — Donald Trump’s acceptance of the Republican presidential nomination can be viewed live and later at RSBN.TV.

During the speech, Trump emphasized “law and order,” economic reforms and a change in Middle East policy, among many other plans.

He criticized Hillary Clinton’s role as Secretary of State under Obama and said that the world is worse for her and Obama’s weaknesses.

He pledged to abolish “unfair trade deals” which have resulted in thousands of Americans having lost their jobs.

He mourned the loss of a young woman the day following her college graduation at the hands of a deported-and-returned illegal alien.

Trump deplored politicians who he sees as self-serving and having brought harm to American citizens.  “I have no patience for injustice…” he said.

At 10:45 p.m., he raised Clinton’s private email server, the results of which he said show an unprecedented level of government corruption.  He said that Clinton avoided “facing justice” because of FBI Director James Comey’s decision not to recommend indictment and prosecution for her handling of classified material and deletion of emails.

Invoking the presidential primaries and Democrat former presidential candidate Bernie Sanders, Trump claimed that “the system is rigged; he didn’t have a chance.”

At 10:49, Trump said he welcomes Indiana Gov. Mike Pence as his vice-presidential choice.

Trump said that the first order of his administration, should he win the election, will be to restore safety, law and order, citing the murders of police officers in Dallas, Missouri, Baton Rouge and other locations in recent weeks.  “An attack on law enforcement is an attack on all Americans,” he said.

“When I take the oath of office next year, I will restore law and order to our country,” he said.  He said that Obama’s “rhetoric” has caused Americans to be more divided than ever and “failed America’s inner cities” in the areas of jobs, crime, education and “on every single level.”

At 10:54 p.m., turning to world terrorism, Trump promised to “defeat the barbarians of ISIS…”

Trump later returned to the problem of illegal aliens crossing the borders and said that under his administration, it will virtually stop.  In contrast, he said that his likely opponent in the general election, Hillary Clinton, wants to import more refugees who reportedly cannot be properly vetted.

He said that a “signature” accomplishment will be to negotiate only trade agreements which are beneficial to American workers. He promised to bring back manufacturing jobs, specifically mentioning the states of Ohio and Pennsylvania.

“Hillary Clinton plans a massive tax increase,” Trump said at 11:16 p.m. EDT.  Contrasting that, he said that his tax plan will “greatly simplify” the code “for everyone.”  He said that “excessive regulation” is costing the U.S. trillions each year.

Regarding energy, he said “steelworkers and mine workers are going back to work again” under his plan.

Trump also touched on improving education and repealing Obamacare.  “You will be able to choose your own doctor again.”

He then said that the TSA, which provides security screening at U.S. airports, “is a disaster.”

“We will completely rebuild our depleted military,” he said at 11:20.  He then said that veterans “will be taken care of like they have never been taken care of before” by his “Ten-Point Plan” which will allow them to see a doctor of their choosing.

He said he will ask for lists of areas of wasteful spending during his first 100 days.

At 11:24, he said that “We are going to appoint justices to our Supreme Court who will uphold our laws and our Constitution” to rousing cheers.

At 11:26, he referred to repealing the “Johnson Amendment” mentioned by an earlier speaker, Jerry Falwell, Jr.

Trump said that Americans can no longer allow “the media” and politicians to maintain the “rigged system.”

He was then joined on the stage by wife Melania, youngest son Barron, and his other children and their spouses. Pence and his wife and children then made their entrance.

3 Responses to "Trump: “Our Plan Will Put America First”"