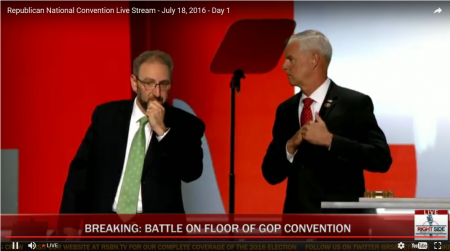 (Jul. 18, 2016) — Shortly after 4:00 p.m. on Monday, the first day of the Republican National Convention, it was reported by RightSide Broadcasting that a number of states submitted adequate numbers of signatures to force a “roll call vote” on the convention floor for a presidential candidate, not necessarily presumptive nominee Donald Trump.

At 4:44 p.m. EDT, RightSide Broadcasting is reporting that there is a “Battle on Floor of GOP Convention.”

After several speakers appeared to restore order, chanting, shouting and pandemonium broke out over a proposed state-by-date roll call vote.

Update, 7:33 p.m. EDT:  It has been reported by mainstream media outlets that the number of states needed to effect a roll call vote fell short, and the convention continued as scheduled.