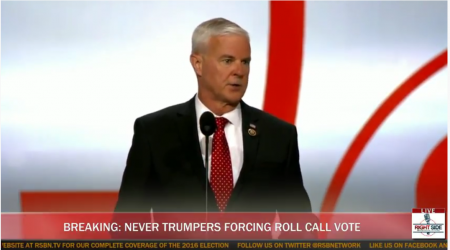 (Jul. 18, 2016) — It appears that a “roll call vote” might be taken at the RNC to replace Donald Trump as the Republican presidential nominee.

Loud shouting and disagreement is noted on the convention floor as some call to abide by the primary voters’ wishes rather than to take the vote.

Brent L. Bozell, III, who supported Ted Cruz for president, is speaking on Fox News now about the commotion and chaos.

Lee said that “the chair abandoned his post,” which puts the convention in “uncharted territory.”

At 4:18 p.m., former Virginia Attorney General Ken Cuccinelli is explaining what a roll call vote would entail:  to take a vote from each state.

“The convention rules are calling for a roll-call vote,” Lee said at 4:20.  “The chair walked off the stage; he completely abandoned his post,” Lee said incredulously.

The chairman returned to the stage and said he could not distinguish the “ayes” from the “nays” as to who favors a roll call vote.  He then asked for each and said that the “ayes have it.”

The chair has found insufficient support for a roll call vote,” he said at 4:26, stating that three states did not have enough votes to be counted.  He then yielded the microphone to Sen. Bob Barrasso of Wyoming, who then gave a speech.

At 4:32 p.m. EDT, The Gateway Pundit reported that “Iowa and the un-elected Colorado delegation walked off — They stacked their delegation with Ted Cruz supporters!”

Resolution Being Adopted at RNC added on Monday, July 18, 2016

One Response to "Resolution Being Adopted at RNC"