WHAT IS WRONG WITH “ALL LIVES MATTER?” 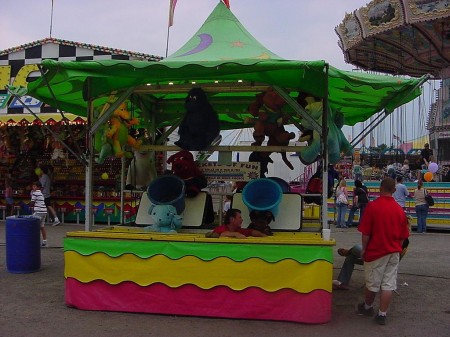 (Jul. 13, 2016) — “Good evening, ladies and gentlemen, this is your Roving Reporter broadcasting live from the midway of a traveling carnival here in a little town in Nevada for ‘Pulse of the Nation.’ Chief New Leaf will be back tomorrow night. Gee, I’ve been away for so long it almost feels as if I’m filling in for the Chief.

“I’ve been enjoying my time on the road and really appreciated being noticed, but now I’d like to say that my autograph days are over so a simple wave or nod is it. You see, Ginger, my dog, is getting a little too protective and we wouldn’t want anyone bitten, now, would we?

“That said, as you can see we’re on the midway approaching the tent of ‘Norman Ryebinsky, Transylvania’s Premier Teller of Fortunes.’ And here’s the bell so we’ll ring: thusly.”

“Door’s open so walk right on in.”

“Not at all, Roving. I know who you are because I’ve watched your show ever since you went satellite. Door? I don’t know; never really gave it much of a thought; it may not be a door after all. It may be, as you say, a ‘flap.’ Now if Chief New Leaf were here he’d have it settled it in no time: don’t teepees have flaps? Anyway, welcome one and all. Just sit anywhere; make yourselves at home: mi casa es su casa, okay? Now, what can I do for you?”

“So you want the ‘Great Ryebinsky’ to tell you? First, please deposit $20 in this box. There! Now we all feel better.

“You see, when you say ‘All lives matter,’ some people actually believe you’re leaving the blacks out of the equation: they fail to recognize that the word ‘all’ is inclusive. In reality, it’s a lack of education and a defensive response rolled into one, and since the #1 problem-solving technique in their community is violence, they mindlessly lash out. Reminds one of the ‘Hands up; don’t shoot’ fantasy: looting and burning their own nest; lashing out because of a lie, which still lives on in the minds of the easily duped.  It’s pretty-much self-destructive, wouldn’t you say?

“It’s not odd that the Asian community has embraced capitalism and flourished: they got with the program. The blacks could’ve been driving the bus, but their leaders have accepted the cost of staying on the reservation; in other words, by accepting welfare a payment is expected: stay in the back of the bus and vote for the hand that feeds you: the Democrat Party. Understand?

“Blacks fail to comprehend that they’re being corrected, and that’s all there is to it. Now, wasn’t that worth $20?”

“Oh, without a doubt. Could you explain it one more time, like in one sentence?”

“No problem. They – the ‘voluntarily disenfranchised’ – become unglued whenever they hear the phrase, ‘All lives matter,’ because – in their minds — that would make them an ‘Uncle Tom’: inclusive in the ‘all,’ which is someone who speaks English rather than Ebonics, embraces the work ethic, and is able to stand on his or her own two feet and not rely on others to spoon-feed them welfare, Food Stamps and an Obamaphone; not relegated to sit in BACK of the bus, but driven over and left behind BY THE BUS (the bus being the pathway to prosperity, which includes obeying the law and not having children just to receive additional public assistance).”

“That was pretty good. Thanks. Heck, as long as I’m here, what’s the future for the USA?” 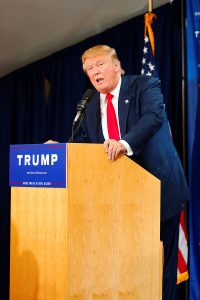 “I see another $20 being put in the box. See? I was right. Thank you. Trump will win the election while the Jeb Bush joke will continue to fall forever behind and will always remain a RINO.

“Yes, Trump will win in November — in a landslide — but the chances of the votes being counted accurately are from slim to zero. Anything else you’d like to know? No?”

“Gee, that’s pretty far out there, I’d say. But thanks anyway. I see that our time is up, so this is your Roving Reporter, on behalf of my sound-boom girl and cameraman, wishing you wonderful viewers a good night: Goodnight.”

“Hey, great show guys. We passed a burger stand on the way in. My treat.”