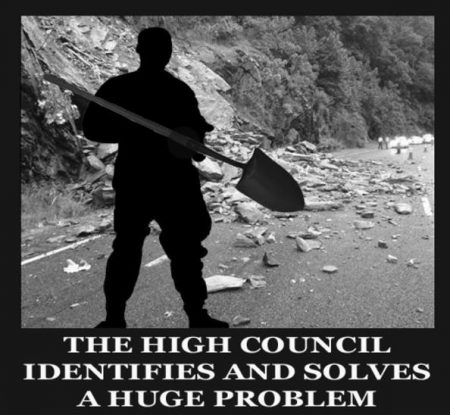 (Jun. 29, 2016) — The High Council meeting has been set.  Many of those who generally find some other activity to be more pressing have notified the Chairman that they will be attending.  The problem, it appears, has finally reached critical mass.

Going on about 20 years now there has been significant data gathered and analyzed which have contradicted decades-old understandings.  Something needs to be done and done quickly.  Society just can’t continue making decisions on a daily basis which all common sense indicates are being formulated in abject antithesis of the accepted consensus.  Tonight’s meeting and the rulings which will come forth from it have been affirmed by the Board of Directors to be valid and legally binding.  This matter will be settled, once and for all, and under penalty of criminal prosecution for those whom, from this day forward, choose dissent.

It has been said that the “Eroders” have been actively practicing their flat terrain dogma for centuries but heretofore have been perceived as inconsequential as relates to the population as a whole.   As they had not been blessed with the ability of travel and expansion and being vastly distant from the major population centers, little interest had been shown to the destruction they relentlessly inflicted upon their own land.  After all, live and let live should always be the model followed by a caring and non-judgmental people. However, that agenda of isolationism has proven to be just one of multiple errors normal societies have cast upon themselves.

The Eroders, quietly at first and more openly as time went on, finding their lands desolate, depleted and unlivable as a result of hundreds of years of forced erosion policies, began the trek to every corner of the known world.  Blinded to the source of their misery, by centuries of extreme teachings, they not just refused but were unable to acknowledge that it was the sheer stupidity of those traditions, which were espoused by the Seer, who actually bore the culpability.

A little information for those not privy to the history of the land.  This planet, located in a solar system in a distant galaxy, was not unlike many others in many other countless galaxies.  It was blessed with high vertical mountain ranges, flat lands and plenty of water for all the needs of the people.   The hundreds of mountain ranges spread out across the pristine planet created moisture and cloud barriers which in turn made precipitation regular and life-giving.  The mountain ranges also broke up hot and cold weather patterns and blocked the unfettered buildup of high and damaging winds.  In a word, nature had created for the inhabitants, a perfect balance of sustainable existence.

Then came, many centuries ago a prognosticator, a visionary, soon to be known as the Seer.  His teachings predicted the growth of mountain ranges to the point where they would block the light and warmth of the sun.  This was deemed by him to be contrary to divinity and nature and therefore, it must be stopped.  Since those out of control mountains, represented evil and the work of Satan, they must be removed.

The following hundred decades found more and more believers as those who did not conform were deemed to be colluders with the devil and had to be dealt with.  And dealt with they were.  Also during this time every means possible was used to topple, at first the very tips of the mountain ranges and then as the years went by, more and more of the mountain ranges were cascaded into the valleys below.

Those who refused to evacuate those valleys were crushed or buried alive by the latest forced erosion efforts.  No loss to the society of the Eroders, since those unbelievers were long ago deemed as colluders of evil.

Without the protection of the high mountain ranges, rains ceased, wind and violent storms destroyed  agricultural and industrial locations.  The Eroders had successfully converted hill and dale to unmanageable, unlivable, wasteland.   The followers of the Eroders were told this current situation was the cause of other mountain ranges located in other parts of the world and that they too needed to be leveled if the planet was to adhere to the teachings of the Seer.  Only then will the deity be sated and the Eroders will rule over an immaculate land for eternity.

Hundreds of thousands of the followers of the Seer were sent forth in all directions with the sole purpose of satisfying the teachings and the demands of the Ruling Eroders.  Their directive was to remove land mass which extended above sea level, using whatever means they could garner.   No matter how little or how much land could be toppled was of no importance.  Time and god were on their side.  And of course, anyone not agreeing or standing in the way, would be expendable.

So across the planet they spread, like a horde of soil eroding locusts, some outfitted with tiny hand shovels, some with larger more effective long handled pointed shovels, began their lone assaults on hundreds of locations.  This included confrontations with individual lowlanders and even some slightly organized resistance.

As the years went by, the thousands of shovel-bearing Eroders left their mark.  Everywhere one looked there could be seen toppled hilltops, buried homes and the stench of rotting evil-doers who stood in the way of the Seer.   Many of the citizens who tried in vain to shovel out their property and search for loved ones found themselves objects of scorn by those of their own villages, who had as yet not been buried.

In unison with the lone topplers, the Ruling Eroders had now organized large groups of trained believers, outfitted them with explosives and huge excavating machines with multiple auxiliary fuel tanks and replaceable teeth for the digging jaws.  These throngs were unleashed upon the areas of the world where the Eroders were allowed a foothold, areas where their destructive beliefs were ignored or excused.  That is when the real damage began.

Back to the present, the High Council Meeting has been called to order and as anticipated, with attendance of 100%.  It was late afternoon and the sun, which by all memory, was blocked at this time of day by the mountain crest.  It no longer is.  Being ignored by all, were the now powerful rays of sunlight which carried motes of dust across the conference room and seems to have obscured everyone’s ability to comprehend what has happened to the horizon.

Be that as it may, many on the Council were emoting signs of satisfaction as they understood that, as a result of the closed door meeting and a cursory polling of all the members, they had indeed come up with a solution.   The consensus and the understanding that common sense measures, which would reset society to the civilized mode of the past, were about to be evoked and stringently enforced.  This fact appeared to be the impetus of their relaxed feelings of accomplishment.

The Edict:
From this day forward the use of or ownership of any type of digging equipment would be illegal and punishable by long terms of imprisonment.   Hand-held garden shovels and long-grip pointed shovels would be confiscated and those who manufacture or sell them would be put out of business.

As anticipated, the vote was unanimous.  Cheers, whistles and catcalls abounded as the proclamation was signed into uncontested law.   The long-awaited High Council meeting was adjourned.  As they filed out of the meeting and into the parking lot there were smiles, grins and back slapping all around.  Then, a distant rumble, reminiscent of a summer thunder storm emanated from the last vestiges of the village’s mountain top which was followed by an earsplitting roar not unlike the sound of a runaway locomotive.  The sound carried with it hundreds of tons of rock and soil.  When the ferocious sound ended and a rolling mass of mountain had settled into a motionless mass of lifelessness, the High Council building, the parking lot and the High Council members were buried under hundreds of feet of pristine mountain.

The newly-released evening sunlight, now mingled with additional dust, smoke and fumes and glittered softly in the evening air as the finer particles settled on and then obscured the newly-empowered edict as it lay crumpled between rocks and crushed bones and not too brilliant common sense.

One Response to "The High Council"