THE PUBLIC TRIAL TO BE CONDUCTED 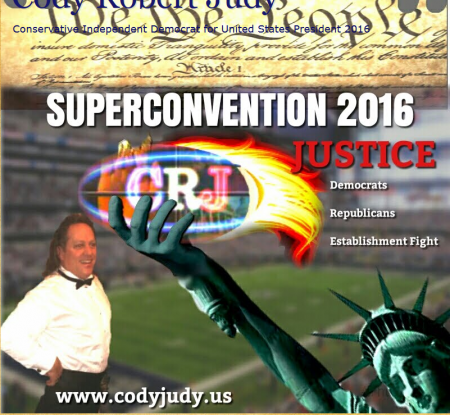 One of the main reasons for a Primary Season in any General Election Year is to formidably test the Candidates within the particular Political Party before the selection for representation is made. The ‘presumption’ the Democrats have made this year that has noticeably been egregious to Candidates such as myself in a coronation standardization evidenced by everything from the miniaturized-weekender-debate-schedule to the favored-candidate-status in the mechanics of the Democratic Party contact munitions favoring Hillary Rodham Clinton, with the greatest qualification from the Candidate’s own mouth being, “Don’t you want to see a women be President, as if she’s about to lift her skirt, may just be the worst thing to every happen to women in the equality of gender movement.

One might ask if I’m a registered in the Democratic Party why I would offer such harsh criticism of Hillary Rodham Clinton as a Candidate for President? The best answer I can give you is because I do indeed care deeply about the pivotal social issues of our time and frankly the representation of inclusiveness that for a long time Democrats have shared for the Constitution, Civil Rights, and the representation of Justice for all U.S. Citizens that government corruption can wipe out without the scrutiny. No team can really get on the field and play a good game without scrimmage practices and come game day those that do will take the field to their chagrin.

Democrats flatly refused anyone on the Debate Stage who was willing to formidably test Hillary Clinton the way Republicans will and are beginning to now, which was a Big Mistake. If I would have been allowed on the Stage I would have objected to Senator Sanders classifying the Private Server she maintained of the Government Secretary of State Office for the People as a “Horror Novel” rather than something we shouldn’t be interested in.  Not only has the democratic party baptized itself in the stagnated lead tainted water of the shark pool known as ‘Group Think’ filtered only by party Established Insiders running the Democratic Party like Muammar Gaddafi into rebel forces where he was cornered and then killed by rebel forces, but in the delusion of ‘Gender Classification’, they have espoused in “government corruption practices” a preferred type of scrimmage which is only a laughing stock by the standard of our Constitutional Republic and a hope as a Light to the World.

Just three hours ago the Washington Post released a story [Hillary Clinton’s email story gets harder and harder to believe]  Link: https://www.washingtonpost.com/news/the-fix/wp/2016/06/28/hillary-clintons-email-story-continues-to-get-harder-and-harder-to-believe/ wherein they report upon 165 pages that were just released that were not among the 55,000 she chose to release to the State Department via the FOIA Request while she was Secretary of State providing a glimpse into how Hillary Rodham Clinton (HRC) works when in Government Office appointing herself as judge, jury and executioner in what can only be called a nefarious responsibility to the Public Service requirements that communications for Public Office be subject to public oversight proving at best bad decision and, at worst, something more sinister on the level of Treason.

Saying it’s harder and harder to believe HRC is about as kind as you can get when calling someone you need to trust, like your husband or wife, a Liar, as they are stuck in denial when you roll out the video in front of them romping in the car with the low jack auto upload YouTube Station you installed for the public display of their affair and affection. With the Youtube Video rolling Hillary is saying it wasn’t her, she wasn’t there, and it had to be an animation trick of some kind.

Yes, it was a “Trick” alright more stylized in the urban dictionary than a magic act. The problem is the consequences of the “Lies” she has told on the Debate Stage tens of millions of people have fallen victim to as “Everything Partisan.” How can it be partisan if I am a Democrat Candidate for President registered with the FEC and a Democratic Party member? In fact how can what I’m saying not be believed when it is solidified by the fact that you haven’t heard of me in the Main Stream Media but the Federal Election Commission knows me, so does Facebook, so does Twitter, so does Blogspot, so does my website up for 8 years www.codyjudy.us, and so does the U.S. Supreme Court along with about 14 other Courts it took to get Judy v. Obama 14-9396?

The “Crooked Hillary” Label Democrats are Setting In Stone added on Tuesday, June 28, 2016