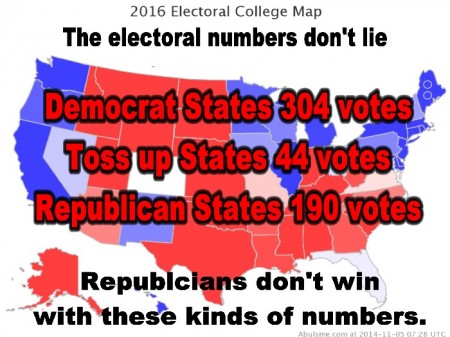 (Jun. 26, 2016) — Moan, groan, puff out your chest, pull your hair, or gnash your teeth and the numbers won’t change.  After over 100 years of buying votes, the Democrats have conquered the nation ….. with votes, using your money.  Think of any constituency group and the Democrats have the plurality.  Whether it is women, the elderly, gays, transgender, blacks, Latinos, or Jews, the Democrats have them and these groups aren’t going to “switch” any time soon ….. unless enough of them are broke or scared.

The entire Democrat ideology has been institutionalized at every level of government.  Every single Democrat-sponsored program, from Social Security forward, is broke or going broke and sending America deeper into irrecoverable debt.  The Democrats’ ObamaCare just accelerated the path to insolvency.

With the tools of propaganda, hype, lies and distortions, the Democrats have been successful in painting conservatives as racists, misogynists, bigots, haters, extremists and anti-American, all the while promoting their own anti-freedom policies of the collective, dependency, multi-culturalism, political correctness, radical environmentalism and the one-world-order.  Individual freedom is the farthest thing from their minds.  Individual freedom doesn’t buy votes from the millions of Americans who have become wholly dependent on government at the expense of those who work.  Democrats have taken compassion to the irrational and carried it to the point of insanity, for votes, on the backs of the taxpayers.

Most of the news media has aided and abetted this century-long mindset shift in the body politic.  Our public schools and colleges are infiltrated with this socialist dung.  Parents of the last two to three generations have been immersed in it.  Our children are being brainwashed in it at home and at school.  When they grow up they get jobs in government or education, thereby perpetuating and propagating this radical, un-American image.  The officers and employees of powerful corporations such as Google, Facebook and Twitter are carriers of the Democrat disease that punctuates and influences everything they do, including censoring conservative speech using computer algorithms or biased editorial boards.

Democrats won’t be happy until we are all in chains, dependent on and subservient to an ever-growing government, with them in control of the political power, as well as our land, our water, our food, our energy, the Internet, our communications, our health care and our money.  Spying on us everywhere will become ubiquitous and Orwellian as they weed out the patriots, mavericks and malcontents among us.  If you challenge their words or authority, you will just disappear.

The hard truth is, Democrats go after votes with promises of money or benefits and then deliver on those promises at the expense of America’s financial security.  Republicans go after votes based on fundamental constitutional principles.   The Republicans are right, but that won’t help them win the popular vote, much less the Electoral College, with millions of dependent Americans who believe the War of 1812 was fought against the Russians.

But if you are a Republican-Establishment-RINO and you want to get re-elected and are without honor, you are going to “go” where the votes reside.  You don’t care about principle.  You only care about your cushy government position and the power, money and perks that come with it.  It makes no difference if you are in the minority, or the majority, just as long as you keep getting re-elected.

Why do you suppose that Mitt Romney, Paul Ryan and the other RINO’s are scared to death of Trump?  He has alienated large portions of the very constituency groups the RINO’s are trying to pander to, or win over.  He’s shaking the timbers of the Republican Party and stirred up a hornet’s nest in the electorate.  They are afraid that as Republican Establishment RINO’s they will suffer what they perceive to be a coattail-demise from a Donald Trump campaign for President.  Instead of getting behind him with all their might, they trash him.  The Democrats and the media are eating it up to the detriment of the Republican Party ….. and freedom.

Why do you think the term “RINO” came into being?  Those Republicans still guided by conservative principles have split with the Establishment class who will do anything to get elected or re-elected, sans principle.  In order to get elected or re-elected, they have had to sell their collective souls and move left, considerably left.  They won’t do anything that might ruffle the feathers of Democrat constituency groups for fear of losing votes, and that is why they give Obama everything he wants.  They won’t chance a veto because they believe it will be turned around and used to denigrate Republicans ….. again, just like what happens when the Republicans shut down the government for all the right reasons.  Republican Establishment RINO politicians are cowards and have become unbalanced and paranoid.

Republicans can’t win unless they get over 50% of the elderly vote who have been bought off by the Democrat-created programs of Social Security and Medicare.  They won’t get the LGBT vote for sure because conservatives still believe in the sanctity of marriage and the nuclear family of one man, one woman and some well-balanced kids and the LGBT community doesn’t.  Republicans can’t win even if they have 100% of the white male vote.

But wait!  There is a wild card in all of this.  The electorate is driven almost entirely by emotion and is thereby fickle.  Most of the electorate doesn’t give one whit about Constitutional principles.  However, they do care about jobs and the economy and they do care about national security, especially after the terrorist attack in Orlando, Florida and the threats of more attacks by ISIS or ISIS sympathizers.  Trump plays heavily into the electorate with these two vote-rich issues.

It wouldn’t be the first time that the electorate shifted in a presidential cycle.  After four years of Jimmy Carter, Americans went big-time for an actor who made people feel that America was still a shining city on the hill.  Now Trump is no Reagan but nevertheless Trump exudes confidence, boldness, energy, power and the dedication to help America reach its full potential, while at the same time going after our enemies with a vengeance.

During the over 230-plus-year history of America, presidents of all stripes, character, persona and flaws have served their country.  Some have served with dignity and honor, and others were lackluster or just plain not up to the job.  Some were hopelessly corrupt.  All have shaped America in one form or another.  Depending on your perspective, the shaping was either good or bad.  As the presidents have shaped America, so, too, has the Presidency shaped each president.  They either have grown in the Oval Office or have become diminished by the job.

Along comes a Trump.  He constantly says, “I am going to make America great again.”  He says his victories will just keep on coming, to the bewilderment of all Americans.  He will make our military stronger than ever.  He will build up our economy beyond our wildest dreams. He personally will negotiate deals that will make our heads spin because he is the great deal-maker.  He will show our enemies, including Russia’s Putin, that when he draws a red line and it’s crossed, there will be severe consequences.  Millions of Americans were eager to hear these kinds of words that Trump utters and rushed to support him.

Trump is a powerful, successful man.   Unfortunately, his untamed mouth makes him prone to gaffes and stretches of the truth, if not outright fabrications.  Like most men, he has flaws and is individually thin-skinned.  The flaws and the thin skin will either doom him or propel him to greatness.

Nevertheless, no matter what the general population thinks of him on either side of the aisle, he has managed to capture the adoration of millions of Americans.  It remains to be seen whether he can keep the current momentum going all the way to winning the Presidency or will open his mouth one too many times and choke off the votes he needs to win over that part of the electorate that wants more jobs and a better economy and wants America to stand up to its enemies and permanently defeat them.

The harsh reality is, Trump wins or loses on the electoral vote.  Right now, as the Electoral College exists today and without a voter revolt, Trump loses and Hillary or some other Democrat wins.  But never underestimate the populous vote, as they just found out in Great Britain when 52% of voters dumped the ruling class in the European Union.

It’s up to Trump and all other Republicans, RINO or conservative, to back him because he wins or loses on Republican and Independent votes and crossovers from Democrats.  Sit out the election or write in another candidate on your ballot and you give your vote to Hillary.  It’s that simple.  A vote for Hillary or any other Democrat is a vote to permanently destroy America and liberty.

A lot can happen in the next four months and what happens will shift the vote one way or another, because as we said, the electorate is emotional, fickle and hopelessly uninformed.  Our political world in America rests atop the sharp point of the sword of fate and random probabilities.  Sadly, emotion, not intellect, rules.

We have written a poem about these issues and have uploaded it to one of our websites.  Now some of you may not like poems, but they are nothing more than a different literary medium to convey a message.   Some poems are witty and well-thought-out, while others are corny or hollow.  You can view the poem HERE and make up your own mind.