“BLATANT RAPE OF THE CONSTITUTION” 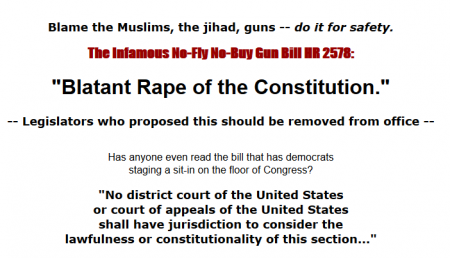 Has anyone even read the bill that has democrats
staging a sit-in on the floor of Congress?

Under the excuse of fighting terrorism, these democrats, with republican allies, want to deny Americans their individual rights to keep and bear arms — without probable cause, without due process, and get this — without being able to view the evidence against them or face their accusers. Their accusers and the evidence remains a secret. Your rights would be denied solely by a secret-police list.

You can’t challenge the proposed law’s legality because it hasn’t got any. It would not pass even the slightest scrutiny, and they know that, hence that clause. My republican senator from Arizona, Jeff Flake, supports this, smiling when he announced it on TV.

The people proposing this 17-page tyrannical travesty should be removed from office.

No court shall consider the lawfulness or constitutionality of this section.

This wholesale violation of the Bill of Rights evaporates the Second, Fourth, Fifth and Sixth Amendments to the U.S. Constitution. There is no valid legal argument for doing this. In fact, the arguments being used are overwhelmingly absurd. It’s preposterous even if you hate guns — it makes no sense — while undermining our entire legal system. Does that matter?

But the truth burns the sound bite:

Then isn’t it insane to let people on the no-fly list travel?

And isn’t it insane to let people on the no-fly list keep all the guns they have?
(They can you know, didn’t anyone tell you that?) That’s because:

People on the no-fly list aren’t charged with anything,
haven’t been convicted of anything,
and can’t be locked up for any violation of anything.

If people on the no-fly list are that dangerous — why are they out walking around?

What’s to stop them from driving to Orlando, or taking Amtrak or a bus? (Hint: nothing.)

And don’t the TSA airport checkpoints work on these people?
They work on us — or don’t they?

And how do you get on the list if you aren’t charged with anything? (It’s a secret.)

And if they’re that bad, how come the law lets them keep guns they already have?
(People added to the no-fly list can’t buy new guns but are not banned from guns in any other way.)

But the real truth is too deep for most people today, and is grounds to have politicians removed from office:

Politicians want to give central government the power to take people’s rights away by writing your names on a list. Their justification: “The muslims made me do it!”

Where do they find any legitimate delegated authority to remove a person’s rights like this, and how do you expect to get away with it?

The democrats’ dream scheme gives broad discretion to “proper authorities” to decide if you can buy a gun. The conditions are spelled out for many pages. Any bureaucrat could fit you into the descriptions with ease. Does this make you safer, or make you feel safer?

“(h) EXCLUSIVE REMEDY.—The judicial review under a petition for review filed under subsection (c)* shall be the sole and exclusive remedy for a claim by an individual who challenges a denial under subsection (a)(1).

* “(c) An individual… who seeks to challenge a denial… may file a petition for review and any claims related to that petition in the United States Court of Appeals for the District of Columbia Circuit or in the court of appeals of the United States for the judicial circuit in which the individual resides.”

And for good measure, in case you want to know why you have been denied:

“(d)(4) No discovery shall be permitted, unless the court shall determine extraordinary circumstances requires discovery in the interests of justice.” Read it all for yourself if you have the stomach.

Please pardon my constant rant, but why hasn’t the “news” media even mentioned any of this? The public is too bored with the details? They can’t understand it, haven’t got the attention span? It’s not sexy enough? We don’t need an informed republic? Constant repetition of inanity is enough? We need more time to hear about the candidates?

HERE’S WHERE IT GETS UGLY

Yes, this says you cannot question if the Flake Amendment (my name for it), the no-fly-no-buy law is legal. Clearly, it isn’t, hence they won’t tolerate questions. This is so much like what we endured with King George.

The absurd attempt to deny review if this thing gets enough votes is an affront to every American — blamed on the muslim jihad, guns, and rationalized for safety. Due process is removed, you are guilty before any trial, and in fact there is no trial. Constitutional rights are simply summarily suspended.

But second, look again, the sentence is incomplete, so it makes no grammatical sense. It could be used at the discretion of whoever implements it, unless or until challenged, “pursuant to a review under section.” This has no meaning. They know this. There is no review.

There are plenty of other problems of course, but do you really want to be bored? The members of Congress yelling from the floor only read the Talking Points, if that, and those don’t mention what’s actually in the bill. They just say, “Save the children,” metaphorically speaking. The media is no better, they’re just broadcasting the spitting. I’ve asked around. I had a hard time find the language myself.