(Jun. 16, 2016) — Editor’s Note:  The following report was received on June 4 from an inmate at the Trousdale Turner Correctional Center (TTCC) along with a letter corroborating the numerous reports The Post & Email has received over the last six weeks of short-staffing, substandard, cold food, nearly-continuous solitary confinement for minimum-security prisoners, a lack of needed medical care, hours-long waiting periods for visitators, and frequent, lengthy lockdowns.

The inmate report was typed prior to his relocation to TTCC. Enclosed with his letter, published on June 6, was a list of six news outlets to whom he mailed both documents; Tennessee Gov. Bill Haslam and Tennessee Department of Correction (TDOC) Commissioner Derrick Schofield were also included.

Over the last several weeks, the mainstream media has reported on many of the same problems described to The Post & Email regarding TTCC, which just opened in January with a “hiring event” having transpired last July.

Earlier this month, Haslam announced that Schofield had tendered his resignation effective at the end of the month.  On Wednesday, longtime TDOC official Tony Parker was declared Schofield’s replacement.

In order to avoid retaliation on the part of staff and the TDOC, we are withholding the prisoner’s name.

TTCC is owned and operated by Corrections Corporation of America (CCA), the largest private prison company in the United States and a TDOC contractor.  As its spokesman, Jonathan Burns, declined to respond to questions from The Post & Email a month ago about conditions at TTCC, on Thursday afternoon we attempted to reach CCA President and CEO Damon Hininger by calling the main telephone number.  After hearing the option of being directed to a specific party and selected, an automated assistant prompted us to enter the first few letters of the party’s name.  However, after entering the letters “HIN,” we were directed to a completely different person and did not leave a message.

The Post & Email then used the contact form on the same webpage to dispatch the following message, presented here in a series of screenshots: 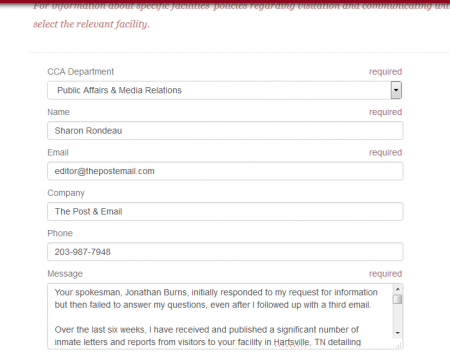 We then received an acknowledgment message after verifying photos of “foods” and “rivers” to ensure that we are not “a robot.” 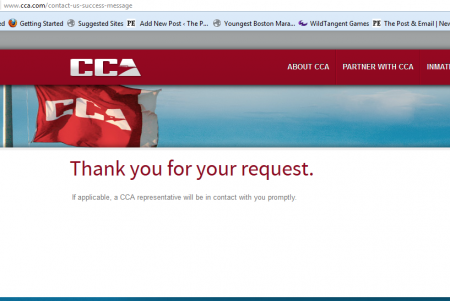 The inmate’s typewritten report relates how prison sentences are lengthened through a parole process which has been said by many, both inside and outside of Tennessee prisons, to be arbitrary and biased against the inmate.  WTSP inmate Walter Francis Fitzpatrick, III and other prisoners have previously detailed “prisoners-for-profit” operations involving educational courses to which the inmate also makes reference.

On page 6, the inmate states that an inmate is charged between $300 and $700 to obtain “legal documentation” necessary to his defense while earning between $20 and $30 monthly from prison employment. He contends that the system is structured so that inmates are “never getting out of prison.”  He cites Fifth Amendment violations, “cruel and unusual punishment,” an Eighth-Amendment violation, and a deprivation of the 14th-Amendment “right to have a jury of his own peers.”  “The State of Tennessee and the State Courts could not find it fit to allow one AFRICAN AMERICAN on the Jury,” he wrote on page 2.

At present, it is The Post & Email’s understanding that no employment opportunities exist at TTCC because of short-staffing.

The inmate also makes a new revelation:  that “pampering” programs allegedly allowing inmates to purchase outside food from such restaurants as Domino’s Pizza, Sherry’s Restaurant, and Dairy Queen are “sending out the Wrong message and this is why a lot of these inmates are coming to prison at such Young ages…” [sic]