Multiple Eyewitness Accounts About CCA Prison Continue to Pour In

“THEY’VE BEEN ON THE NEWS FOR THE LAST FEW DAYS” 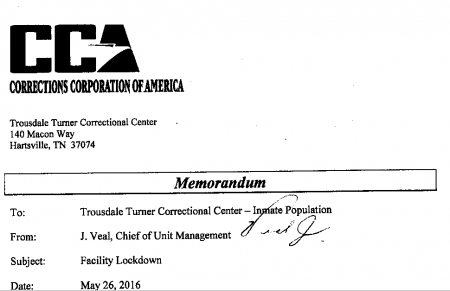 (Jun. 5, 2016) — As has occurred over the last five weeks, letters from inmates at the Trousdale Turner Correctional Center (TTCC) in Hartsville, TN continue to arrive describing draconian conditions within the newly-minted facility which opened its doors in January.

As The Post & Email has reported since May 17, inmates from various Tennessee prisons have been shipped in large numbers to the private institution operated by Corrections Corporation of America (CCA) with the apparent goal of filling its 2,672 beds.

However, on May 25, the Associated Press reported in an article carried by multiple news outlets that as a result of a poor inspection report issued on March 17, the institution stopped receiving new inmates two weeks prior.

Although the inspection report issued by Tennessee Department of Correction (TDOC) Correctional Administrator Tony Howerton noted multiple infractions, men continued to arrive until at least the end of April, as reported to The Post & Email by an inmate who was relocated there at the time.

Contrary to that which they had been led believe upon transfer, inmates have reported worse conditions at TTCC than those they faced in the prisons from which they arrived in the form of short-staffing to the point of danger for both correctional officers and inmates; no hot meals; no exercise; no access to employment or the law library; and being locked in cells for 23 hours each day, if not more, despite minimum-security designations.

A letter received on Saturday along with several others says that “Medication isn’t giving out like they are surpose to.” [sic] You’ve got people that gets a monthly medication which is called kop that you keep with you but they’ll not passing them out,” he wrote.  “And people needs those meds like myself.”

His complete letter, minus his name, appears below, as well as the CCA handout he referenced at the outset of his letter. “Safety, security, and accountability of inmates is a primary responsibility of any correctional institution,” the memo begins.  “Trousdale Turner Correctional Center has been entrusted with the care and custody of all inmates that are currently housed here.  Within the last several months we have encountered and been challenged with several security concerns and issues throughout the facility.  The facility has been placed on lockdown until further notice…”

CCA operates approximately 70 facilities across the country, primarily in the South, West and Mountain West.  Its headquarters is in Nashville, TN.

The private prison industry’s growth and profits have been a subject of focus over the last several years. In 2012, the public-interest organization ProPublica reported that the number of inmates housed in state and federal CCA facilities increased by 37%. 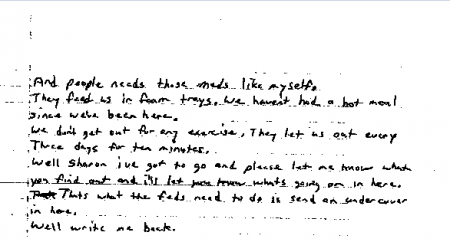