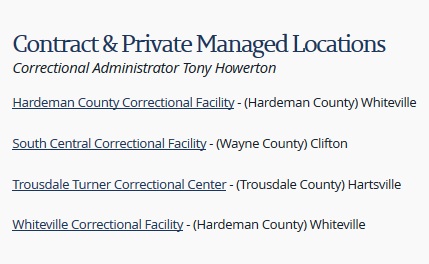 (Jun. 4, 2016) — On Saturday, The Post & Email received two letters from different Tennessee prison inmates describing a lack of security at the Trousdale Turner Correctional Center (TTCC) in Hartsville, TN resulting from the arrival of gang members and other violent prisoners to the “medium-security” facility from other institutions.

One letter came from a TTCC inmate who has been regularly reporting on the conditions since arriving there in the spring including frequent lockdowns, irregular dispensing of medications, and being locked in a cell for 23 hours each day as a minimum-security prisoner because of a lack of staff.

He said that he has not been able to use the law library since there is no one to issue a pass.  “…we have no ideal when we are coming off lock down,” [sic] he wrote in the letter after reporting that a correction officer was assaulted last week.

TTCC is operated by Corrections Corporation of America (CCA), a private company which “partners” with the Tennessee Department of Corrections (TDOC).  CCA operates four prisons in a “contract” arrangement out of a total of 14 in Tennessee.

The second inmate whose letter arrived today, Bryant K. Lewis, resides at the Northwest Correctional Complex (NWCX) in Tiptonville but has seen a large exodus of inmates relocated to TTCC since it opened in January.

It is unclear if the two inmates are acquainted, but both have made the observations that because dangerous prisoners have been transferred to TTCC in large numbers, inmates and employees at the facility are at high risk of injury.

Several weeks ago, the TTCC inmate’s letters preceded a barrage of reportage about the conditions at the institution by the Associated Press, WSMV and other Tennessee mainstream media, and this publication stemming from interviews of inmate relatives and documents the AP was able to obtain.

A relative who spoke with The Post & Email last week told us that although NWCX is considered by many to be the most dangerous of Tennessee’s prisons, her loved one was faring much worse at TTCC than at NWCX, from which he had been transferred.  “Northwest was terrible, and now he’s saying, ‘I’d rather be at Northwest.’  We thought TTCC was going to be better, but we’ve found out that it isn’t,” she told us.

Relatives have reported that during visitation hours, the facility often is pronounced to be on lockdown and they are forced to leave, sometimes without having seen their incarcerated relatives.

Lewis has been a victim of assault at NWCX and was originally imprisoned in a CCA facility, SCCF, beginning in 1992.  He concluded his letter with “Once again thanks for listening to the cares and concerns of the less fortunate.”

The TTCC inmate ended his with “Why don’t T.D.O.C. take this prison over if CCA can’t handle it?” Tennessee Inmate Reports Corroborate Each Other added on Saturday, June 4, 2016