Barry Soetoro-Obama was inaugurated on January 20, 2009 as the FIRST Faux, FIRST Half-Black, FIRST Muslim and FIRST homosexual President of these PURPORTEDLY UNITED States of America. How on God’s green earth and deep blue oceans can a blatant deceiver carry on like an emperor or a dictator, spend taxpayers’ money as if it were his own hard-earned money unless there were 435 Representatives, 100 Senators and 9 Justices who conspired for a secret, unlawful, or evil purpose, such as the overthrow of the Government of the United States?

There have been four separate and distinct congresses responsible for oversight of our nation’s government activities, management and funds. YET in the face of overt TREASON, there has not been reported a single instance of Articles of Impeachment being dropped into the hopper of the receptacle on the desk of the Clerk of the House.

This gross dereliction of duty to “Protect and Defend” and no outcry from the sycophantic media or at least ONE member of Congress out of 535 who, if they knew the contents of the Constitution, would have sought impeachment the very first time Governor Jan Brewer of Arizona sought help per Article IV to halt the invasion of Arizona, by foreign invaders in 2009. Complicating that matter was the fact that two purported constitutional scholars, Barry Soetoro-Obama and Attorney General Eric Holder. Liars both, they falsely informed her that she did not have the authority as the governor of a sovereign state to stop, question and detain, and incarcerate for deportation such invaders. That was, in fact, a blatant, bald-faced lie and thus criminal perjury.  Article I, Section 10, Clause 3 is clear on that point, and even the eminent U.S. Supreme Court Associate Justice Joseph Story in his Commentaries on the Constitution supported that particular contention. She was not only permitted but likely had the duty to repel with FORCE these murderous cockroaches invading not only Arizona, but New Mexico, Texas and California as well. 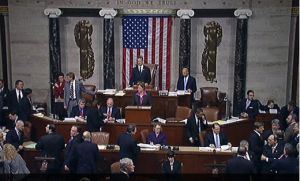 It is just common sense to take firm and decisive action when a crime has taken place. Soetoro-Obama is without doubt a criminal, a traitor, a perjurer and the Congress are his co-conspirators. This Republic belongs to its citizens and NOT to infiltrators, pretenders, criminals and their army of collaborators.

If I, a concerned citizen, am able to perceive and recognize the crimes of Soetoro-Obama, how in the name of God can 435 United States Representatives, 100 Senators, one Vice-President, 9 Justices of the Supreme Court, the directors of the Federal Bureau of Investigation and the United States Secret Service and the Chairman of the Joint Chiefs of Staff justify their tenure in the high offices they hold?

My friends keep telling me, “Tom, you had better watch out; you can’t buck the system.” Is that supposed to frighten me? Bring it on, you abject servants of the People. I answer only to the law of the land as it is written and to God who created this as His chosen republic when he created this magnificent Universe and humankind many millennia ago. I can, with a clear conscience, look any member of our so-called government, regardless of his/her position, in the eye and say to them, “You have FAILED!” “Failed your Nation, your Oath of Office, your duty; and worst of all, you have failed God the Father.”

And, don’t forget Soetoro-Obama has TWICE committed Treason and Accessory to MURDER!