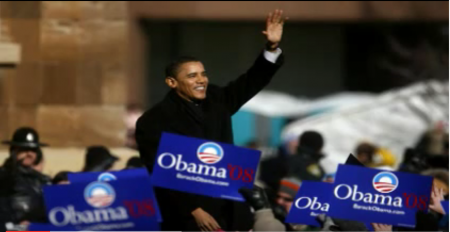 (May 21, 2016) — In an article published in USA Today on February 9, 2007, writers Fredreka Schouten and Judy Keen quoted Barack Hussein Obama as having said that his impending presidential run “‘will send a wonderful message to young people of color and to immigrants around the country’ if successful.”

The Post & Email originally located the article Saturday morning in a subscription newspaper archive, GenealogyBank.com.  While undated in its current place on the internet, GenealogyBank displays the article as it was published in the Rockford Register Star with a date of February 9, 2007, which happened to be the day before Obama officially announced his candidacy for President of the United States.

Although invoked in Obama’s opening statement, the term “immigrant” or “immigrants” does not reappear at any other point in the article, including in a question-and-answer exchange with the prospective candidate not depicted in the internet version.

While obvious that Obama might use his mixed-race origins to appeal to blacks, neither Keen nor Schouten appears to have questioned him specifically as to why he included a potential benefit to “immigrants” should he win the nomination and eventual presidency.

An identifier at the top of the archived article at GenealogyBank reads, “Date: Friday, February 9, 2007  Paper: Register Star (Rockford, Illinois)  Page: 25” and is followed by a disclaimer which states, “This entire product and/or portions thereof are copyrighted by NewsBank and/or the American Antiquarian Society. 2004.”

Article II, Section 1, clause 5 of the U.S. Constitution requires the president to be a “natural born Citizen,” a criterion reserved only for the chief executive, who was also assigned the duties of commander-in-chief by the Founders of the new nation in 1787.

“Immigrants” to the U.S. who arrive legally can be granted temporary status, permanent residency, or, after five years of residency and meeting of other conditions, be granted U.S. citizenship through naturalization.

Even in the most liberal interpretation of the term “natural born Citizen,” it is agreed that “a naturalized citizen cannot serve” as president.

Matthews is not the only member of the media to report that Obama was born in Indonesia and not Hawaii, as Obama has claimed.  In January 2006, Will Hoover, then of the Honolulu Advertiser, had reported Obama’s birthplace to have been Indonesia but subsequently changed it to say that Obama was “born in Hawaii.”

No hospital in Hawaii claims to have been Obama’s birthplace, although Obama has stated it as Kapiolani Maternity & Gynecological Hospital, now known as Kapioani Medical Center.

In May 2012, Breitbart News displayed a biography circulated by Obama’s former literary agent, Dystel & Goderich, stating that Obama was “born in Kenya and raised in Indonesia and Hawaii.” In April 2007, approximately two months after Obama declared himself a presidential candidate, the biography was inexplicably changed to say that he was “born in Hawaii.”

When confronted with the revelation, Miriam Goderich attributed the “born in Kenya” narrative to “a fact checking error.”

As Hillary Clinton competed against Obama in 2007, her then-adviser, Mark Penn, reportedly created a strategy in which Clinton would invoke Obama’s “lack of American roots” to bolster her own chances of receiving the Democrat nomination.

During the closing weeks of the 2008 presidential campaign, former New Mexico Gov. Bill Richardson told Spanish-speaking media that Obama was, in fact, “an immigrant.” 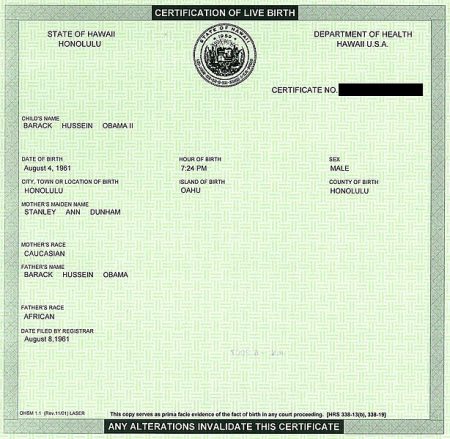 In June 2008, following its publication at The Daily KOS, the Obama campaign, on its now-defunct “FighttheSmears” website, released what it said was Obama’s “birth certificate,” an image containing a green background and no official seal from the issuing government agency. Accompanying the image were the claims that Obama qualified to serve as president as a result of the 14th Amendment and his alleged birth on U.S. soil.

Several articles dated prior to Obama’s announcement of his presidential run appearing in overseas publications stated that he was “Kenyan-born,” a statement reiterated more recently by Fox News’s political commentator, Greg Gutfeld.

Just after the November 4, 2008 election in which Obama was declared the winner over Republican opponent Sen. John McCain, Peter Ogego, then-Kenyan ambassador to the United States, exuberantly told a Michigan radio station that Obama’s “birthplace there (in Kenya) is well-known.”

Several weeks later, a seemingly defensive Ogego said he “didn’t know” where Obama was born and suggested that Americans “ask their government.”

Since occupying the White House, Obama has approved the relocation of tens of thousands of Middle-Eastern individuals, nearly all of whom practice Islam, to the United States.  Often they have been “resettled” in hundreds of American cities at taxpayer expense and without the knowledge of city or state officials.  Obama has praised “immigrants and refugees” as “the nation’s oldest tradition and part of what makes the country exceptional.”

In June 2012, Obama declared by “executive action” that persons aged 30 and under who were illegally brought to the United States as children by their parents could apply for “deferred action” which, if approved, would result in their ability to remain in the country when they would otherwise potentially face deportation.  One such “DACA” recipient has since been charged with the murder of four people.

The Center for Immigration Studies (CIS) and other sources have reported that deportations of illegals have fallen to a record-low level over the course of the Obama regime.  Cubans, Central Americans and Middle-Easterners have continued to flood the southern border.

In 2014, a sharp increase in the number of unaccompanied children and adults crossing from Mexico into the U.S. was met with Obama’s opening of military bases to house, feed, clothe and medically treat them, then arrange for transportation to temporary homes through contracted “escort services.”

On November 20, 2014, Obama announced a new policy by which DACA recipients’ relatives could earn reprieves from deportation under certain circumstances through a new initiative, DAPA.  Twenty-six states challenged the constitutionality of the decree, which was placed on hold by a Texas federal judge and later, the Fifth Circuit Court of Appeals.  The U.S. Supreme Court is now weighing whether or not Obama’s actions are constitutional.

Obama’s executive actions included an expansion of DACA such that those approved for it would receive three-year reprieves rather than the original two-year increment.

In a scathing ruling on Thursday, U.S. District Court Judge Andrew Hanen imposed sanctions on the attorneys from the U.S. Department of Justice who knowingly misrepresented that no DACA participants had received three-year reprieves while the plaintiffs’ litigation was pending.  In his opinion, Hanen wrote that the DOJ attorneys had been “intentionally deceptive” (p. 13) and ordered that they sit for a minimum of three hours of ethics training each year for the next five years.  Hanen additionally barred the attorneys involved from practicing in any of the 26 plaintiff states on a pro hac vice basis (p. 28).

Early in 2011, then-potential presidential contender Donald Trump began pressuring the White House to release a more detailed birth certificate for Obama disclosing his birth hospital, the name of the delivery doctor, and other details which had to that point not been available.

On April 27, 2011, the White House released what it said was a scan of a certified copy of Obama’s “long-form” birth certificate obtained from the Hawaii Department of Health by special agreement. In very short order, however, graphics experts went on the record to say that the image is a poorly-created forgery.

Neither the media nor anyone in the U.S. Department of Justice launched an investigation into why a forgery of Obama’s birth record would have been presented to the public.

On the day of its release, former White House Communications Director Dan Pfeiffer insisted that doubts about Obama’s birthplace amounted to “a fake issue.”

In August of that year, concerned that their votes in the 2012 presidential election would be disenfranchised if the document proved to be fraudulent, approximately 250 Tea Party members approached their sheriff in Maricopa County, AZ, Joseph M. Arpaio to request an investigation. Arpaio consented, designating his non-profit “Cold Case Posse” to assume the task so as to preclude the use of taxpayer dollars.

At the time, Arpaio said that he expected that a brief examination of the image would “clear the president” and dispel any doubts that Obama was born in the United States.  After several days of analysis, however, Cold Case Posse lead investigator Mike Zullo informed Arpaio that the image could not have originated with a paper document, and a more lengthy and involved investigation commenced which remains ongoing.

On March 1, 2012, Zullo and Arpaio gave a press conference during which they declared that the investigation had found probable cause to believe that the image posted on the White House website is a “computer-generated forgery.” Also examined during that time and found to be fraudulent was Obama’s purported Selective Service registration form, which had been mailed to various requesters through Freedom of Information Act (FOIA) submissions.

Neither the White House nor the Selective Service System has addressed the posse’s findings.  However, SSS Director Lawrence Romo refused Arpaio access to the record or microfilm containing Obama’s registration, with the agency announcing a new policy of recordkeeping and disposal four days after the posse’s investigation was launched.

Zullo has said on multiple occasions that the long-form birth certificate image was posted on the White House website “with the intent to deceive.”

Despite a second press conference on July 17, 2012 further detailing the posse’s conclusions, no member of Congress has sought to launch an investigation into the birth certificate and Selective Service deceptions, although Obama’s deputy national security adviser, Ben Rhodes, has been under scrutiny since appearing to admit to a New York Times Magazine reporter this month that the regime’s communications with the media regarding the Iran nuclear “deal” were purposely deceptive.

“The genius of our founders is that they designed a system of government that can be changed.” — Barack Hussein Obama, presidential announcement speech, February 10, 2007

Did Obama Admit to Being an “Immigrant” Before Announcing His Candidacy? added on Saturday, May 21, 2016

9 Responses to "Did Obama Admit to Being an “Immigrant” Before Announcing His Candidacy?"