NO MEMBER OF CONGRESS HAS UPHELD HIS OATH

(May 5, 2016) — In a Facebook post issued on Wednesday night, Nebraska Sen. Ben Sasse lamented that the likely presidential candidates from the Republican and Democrat Parties appear to be, respectively, Donald Trump and Hillary Clinton.

Sasse, a first-term Republican elected in 2014, had expressed dissatisfaction with Trump as the standard-bearer of his party prior to Trump’s overwhelming win in the state of Indiana on Tuesday over former opponents Texas Sen. Ted Cruz and Ohio Gov. John Kasich.

Sasse is calling for a third-party option to the front-runners who he claims are “dishonest and have little chance of leading America forward.”

Both Cruz and Kasich suspended their campaigns following Trump’s significant Indiana victory, Cruz on Tuesday evening and Kasich on Wednesday afternoon.  The two had forged an alliance of sorts prior to the April 26 five-state, East-Coast primaries in an effort to prevent Trump from reaching the 1,237 delegates reported as necessary to win the nomination at the Cleveland convention in July.

In his Facebook post, which began as a series of short comments on Twitter, Sasse reminded readers that “The oath I took is to preserve, protect, and defend the Constitution. In brief, that means I’m for limited government.”

Farther down in the Facebook posting, Sasse related encounters he had had earlier that day with Walmart customers in Fremont, whose website currently reminds the public that a “1.75% Prepared Food and Beverage Occupation Tax” is “owed on gross receipts of sales of food and nonalcoholic beverages within the City which are subject to the sales and use tax imposed by Ordinance No. 5343 as a result of the Fremont Municipal Code.”

Sasse’s most recent sentiments have been widely disseminated on the web, described by Business Insider as a “fiery Facebook manifesto.”  His “open letter” prompted one reader to suggest that Sasse run himself for the third-party candidacy he is promoting.

In addition to the presidential election, all 435 seats of the U.S. House of Representatives will be elected as well as one-third of the U.S. Senate. Over the years, the presidential contest has received the preponderance of American voters’ attention as contrasted with congressional races, although the Constitution delegates many more responsibilities to the Congress.

On Thursday, The Washington Post reported that Sasse “is still the only sitting GOP senator to say he simply won’t vote for Trump under any circumstances. And now, even as many who labeled the now-presumptive nominee all manner of things — including ‘unstable’ and ‘dangerous’ — say they would somehow still prefer a man with those deficits to Hillary Clinton, Sasse isn’t backing off.”

Jennifer Rubin, “conservative” columnist at The Washington Post, wrote on Thursday that those opposed to both Trump “have the peace of mind — the pride, even — of sticking to principle. They don’t have to worry about the election results, because Trump’s defeat is certain. Unlike with prior elections, there is no emotional investment, no disappointment when the Republican doesn’t get above 200 electoral votes. They can watch the debates without becoming nauseated at the prospect Trump will say something horrendous. In fact, they are counting on it.”

Rubin further opined, “There is honorable work to be done in defeating a pathological liar/narcissist/know-nothing. For once, ‘bipartisanship’ has real meaning. One learns that politics does not require that you mortgage your soul and put your intellectual powers under lock and key; in fact, the highest form of politics is to be guided by one’s moral code and intellectual powers. There is camaraderie in a cause bigger than one candidate or one election.”

Townhall columnist Katie Pavlich, who has openly said that Trump is inadequate to represent the “conservative” cause in the style of President Ronald Reagan, raised the question of Sasse’s becoming the third-party candidate for which he appears to advocate, something which those in the “#NeverTrump” initiative have reportedly been discussing for a number of months as Trump’s candidacy, rather than “imploding” early on as predicted, has now garnered enough primary victories to now render him the presumptive Republican nominee.

Many identifying with the #NeverTrump movement had endorsed Cruz, who was born in Canada and whose constitutional eligibility remains under challenge both at the U.S. Supreme Court and in state courts.

Some of the comments beneath Sasse’s Facebook post expressed agreement with his frustration over the two presidential front-runners, while some viewed Sasse as “part of the problem.”

In response to Sasse’s column, The Post & Email felt compelled to submit the following: 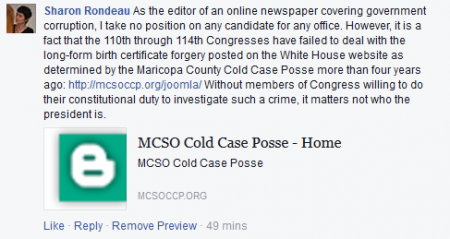 Just over five years ago, on April 27, 2011, the White House posted what it claimed was a scan of a certified copy of Barack Hussein Obama’s long-form birth certificate released by the Hawaii Department of Health at Obama’s request. After several document and imaging experts quickly denounced the image as a forgery, Maricopa County Sheriff Joseph M. Arpaio tasked his volunteer criminal investigative “Cold Case Posse” with conducting an initial analysis in order to put constituents’ fears to rest that their votes might be disenfranchised in the upcoming 2012 presidential election.

After several days of examination, Cold Case Posse lead investigator Michael Zullo informed Arpaio that the image was problematic and could not have stemmed from an actual paper document.

On March 1, 2012, Zullo and Arpaio presented their findings at a press conference in which they declared that there was probable cause to believe that the long-form birth certificate image and Obama’s Selective Service registration form are “computer-generated forgeries.”

A second press conference on July 17 of that year revealed that the standard of probable cause concerning the long-form birth certificate had been surpassed by additional investigation, and Arpaio called upon Congress to launch its own fact-finding mission.

Congress refused to act, the media refused to report the posse’s conclusions, and Obama was re-elected to a second term.  “Conservatives” at Townhall, The Washington Post, The Washington Times, and on talk radio refused to broach the topic of the fraudulent documents.  Journalists were reportedly threatened not to raise the issue, and some received death threats for having done so in the alternative media.

Article II, Section 1, clause 5 of the U.S. Constitution requires that the president be a “natural born Citizen,” which is commonly believed to mean “born in the United States.” When U.S. citizenship is claimed by an individual born outside of the country, the citizenship of the person’s parents becomes paramount, including determining whether or not one or both meet the residency requirements set forth by Congress.

Since 2008, doubts and questions had arisen as to Obama’s constitutional eligibility to serve as president based on his claim of a foreign-citizen father who never naturalized as a U.S. citizen. Obama’s claim of a birth in Hawaii has not only been contradicted by news articles written prior to the launch of his presidential candidacy, but also by his former literary agent and supporter, former New Mexico Gov. Bill Richardson, who termed Obama “an immigrant” during the 2008 campaign.

Likewise, while campaigning in Indiana last Saturday, Cruz’s wife Heidi described her husband as “an immigrant.”  Born in Canada, Ted Cruz claims he is a “natural born Citizen” because his mother was a U.S. citizen at the time of his birth.

As ballot challenges to Cruz’s candidacy have mounted during this primary season, various administrative law judges have opined that it is the purview of the Electoral College and Congress to vet presidential candidates.

The Post & Email’s comment on Sasse’s Facebook page is the most recent of 1,094 comments appearing as of press time, with no additional remarks having been made.

With Focus on Presidential Election, What About the Obama Forgeries? added on Thursday, May 5, 2016

2 Responses to "With Focus on Presidential Election, What About the Obama Forgeries?"