“THE FATE OF AMERICA” 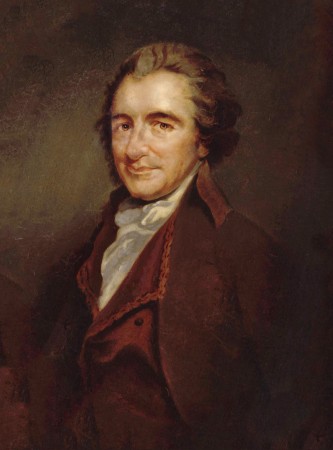 (May 1, 2016) — After reading Thomas Paine’s Common Sense, many citizens shared the pamphlet with friends.  George Washington described the general reaction to Common Sense: “My countrymen I know, from their form of government, and steady attachment heretofore to royalty, will come reluctantly into the idea of independence, but time and persecution bring many wonderful things to pass; and by private letters, which I have lately received from Virginia, I find “Common Sense” is working a powerful change there in the minds of many men.”  George Washington, Letter to Joseph Reed, April 1, 1776

“… We ought to reflect, that there are three different ways by which an independency may hereafter be effected, and that one of those three, will, one day or other, be the fate of America…  [1] By the legal voice of the people in Congress; [2] by a military power, or [3] by a mob…  Should an independency be brought about by the first of those means, we have every opportunity and every encouragement before us, to form the noblest, purest constitution on the face of the earth. We have it in our power to begin the world over again.

… WHEREFORE, instead of gazing at each other with suspicious or doubtful curiosity, let each of us hold out to his neighbor the hearty hand of friendship, and unite in drawing a line, which, like an act of oblivion, shall bury in forgetfulness every former dissension. Let the names of Whig and Tory be extinct; and let none other be heard among us, than those of a good citizen, an open and resolute friend, and a virtuous supporter of the RIGHTS of MANKIND, and of the FREE AND INDEPENDENT STATES OF AMERICA.”  Thomas Paine, Common Sense, January 10, 1776

“… until an independence is declared, the Continent will feel itself like a man who continues putting off some unpleasant business from day to day, yet knows it must be done, hates to set about it, wishes it over, and is continually haunted with the thoughts of its necessity…”  Thomas Paine, Common Sense, January 10, 1776

“Its effects [Common Sense] were sudden and extensive upon the American mind.  It was read by public men, repeated in clubs, spouted in Schools, and in one instance, delivered from the pulpit instead of a sermon by a clergyman in Connecticut.”  Benjamin Rush, A Memorial, (Autobiography), 1905

“… should we wander from [The Founding Principles]… let us hasten to retrace our steps and to regain the road which alone leads to peace, liberty, and safety.”  Thomas Jefferson, First Inaugural Address, March 4, 1801