“A CESSPOOL OF IMMORALITY”

(Apr. 30, 2016) — It is verifiable fact without doubt that this glorious Republic was founded by Christians as a Christian nation wherein its citizens could practice their faith as they chose or choose no faith at all.

That the first Christians were Jews, there is no doubt; thus our ethic or set of moral values is the Judeo-Christian ethos.  It is NOT practiced by politicians who are under some misguided notion that Church and State MUST not be intermingled. The Constitution does NOT address that as an issue; rather, the Constitution recognizes God as the Creator, our guide, benefactor and source of all our rights.

God the Creator had America in mind 13.8 Billion years ago, even before time began, with the “Big Bang” or, more aptly, the ‘Singularity.’ Most Americans have ‘Faith’ in Him; it is more accurate to say all save a few ignorant, uneducated fools like the late Madelyn Murray O’Hair. A professed atheist and founder of American Atheists in 1963, whose quote “There is no God. There’s no heaven. There’s no hell. There are no angels. When you die, you go in the ground, the worms eat you” was the hallmark of a vain, arrogant, obnoxious money-hungry witch. She ended up murdered, as you would expect to be the fate of America’s most hated female. That was some years before Hillary Rodham Clinton came on the political scene, BS and all.

The same cannot be said about government and its practitioners, POLITICIANS.  Faith by definition excludes all politicians since “Faith” signifies: confidence or trust in a person or thing. Our founders were never under any illusions regarding political parties and the debilitating effect they could have on a nation. Trust, on the other hand, implies: “confident expectation of something; hope.” Several miles short of faith but a quality or capacity expected of our hired help.

Confidence and Hope are most often misplaced. Our Founding Fathers, all 55 or so of them, were trustworthy. When they subscribed to an Oath, they meant it and took it literally and seriously. Since March 4, 1829 and the inauguration of Andrew Jackson as this republic’s Seventh President, Trust took a back seat to greed, the ‘spoils’ system, patronage, Dereliction of Duty, Loyalty to Party First and Nation Second.

Jackson was the first of our 43 Presidents who should have been IMPEACHED for Dereliction of Duty for allowing his appointee, Samuel Swartwout, the Collector of Customs in New York City, then the nation’s capital. Swartwout absconded with $1,225,705.69 and Jackson made no attempt to extradite him from London where he had taken refuge. Jackson, following an impeachment, should then have been tried for the mass murder of the over 4,000 Native Americans who died during a forced march under armed guard from their ancestral homes to Indian Territory in what is now the State of Oklahoma. 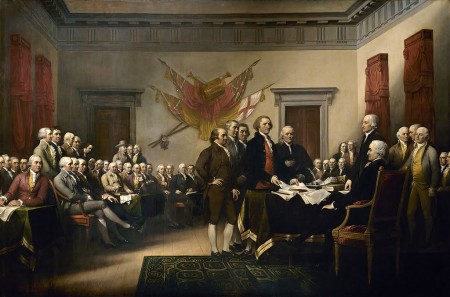 Our Founders were men of impeccable honesty and trust, they mistakenly believed that public servants, elected under the Constitution, would put their own needs and desires aside if they were elected to represent the citizens of God’s Chosen Republic. Jackson, a Democrat, and his Seventh Administration, set the tenor of the political parties from 1829 until 2016, or 187 years, with few good administrations serving to reverse such a disastrous model.

There are and there cannot be any excuses for the malfeasance of the vast majority of the latest 38 administrations, be they Whig, Democratic or Republican, entrusted with the care of this nation’s business. Though each and every party has had its bad, unethical, and even criminal actors, they never seem to learn. The lure of false, i.e., criminal power and lure of the almighty dollar is to a politician as whiskey is to a drunk or any female is to a lecherous Bill Clinton.

This Republic’s troubles are far beyond greed, lechery, graft or atheism. We have plunged into a cesspool of immorality, amorality, gratuitous sex, philandering, homosexuality, pederasty, and bestiality, all under the guise of liberation from oppressive responsibility otherwise known as perpetual childhood sans responsibility.

More and more children, after graduating from college, moved back home with Mom and Dad. Responsibility was not in their dictionary nor was abstinence from often disastrous premarital sexual activity. Irresponsible males argued, “Well, she should have been on birth control pills.” If a boy made a girl pregnant neither society or conscience forced him to marry her. Abortion became the norm; marriage and birth rates declined among Caucasians. Conversely, birth rates surged and marriage rates tumbled among Blacks and Hispanics.

In 2003, the U.S. Supreme Court decriminalized consensual sodomy, an overt case of the courts making law.

As bad as our nation has become, the government, that is, the men and women elected to or appointed by that elected government, has by any measure continued the patronage and spoils system begun by Andrew Jackson. Lobbyists have virtually free rein within the halls of government, including the White House itself after Barry Soetoro-Obama promised that “Lobbyists” would not be welcome in ‘his’ White House; just one of the 769, 452 known lies he has mouthed during his far-too-long tenure.

I Pray to Almighty God that Director Comey of the FBI has the intestinal fortitude and the independence, in the consequential failure of the Congress to impeach, to indict Obama, Clinton, Holder, Biden, Panetta, Dempsey, and others for the capital offenses of which they are guilty,