WHILE CONTINUING TO SHIELD OBAMA?

(Mar. 26, 2016) — A columnist for The Washington Times has apparently been fired for having stated in a tweet will that he has personal knowledge of an allegation made against presidential candidate Ted Cruz in the media on Thursday.

The Times issued three tweets on Friday culminating in a statement that the professional “relationship [between columnist Drew Johnson and the newspaper] has ended as of today.”

According to Johnson’s Twitter feed on Saturday, The Times did not send an email or place a phone call to inform him that he would no longer be a paid writer on its staff after initially telling the public that he left their employ “over a year ago” (above).

Johnson also tweeted a copy of a check reportedly issued to him by The Washington Times in remuneration for his work, stating, “The @WashTimes says they haven’t had a relationship with me in over a year, but they still pay me for my columns.”

Johnson’s most recent WT column was published on March 4.

On Twitter and other social media sites on Saturday, commenters noted that while Johnson’s archive of columns remains available at The Washington Times, the publication appears to have removed his biographical information.  Johnson’s Wikipedia page was updated to reflect that he was fired “in March 2016” with a link to The Times’s Twitter announcement.

Wikipedia’s link to Johnson’s articles at The Times now leads to the publication’s home page.

In the second of the series of three tweets issued on Friday, The Times characterized Johnson as “a former employee who occasionally wrote for our ‘citizen-journalist’ portal known as Communities,” which was challenged by several following the story, including The Post & Email. 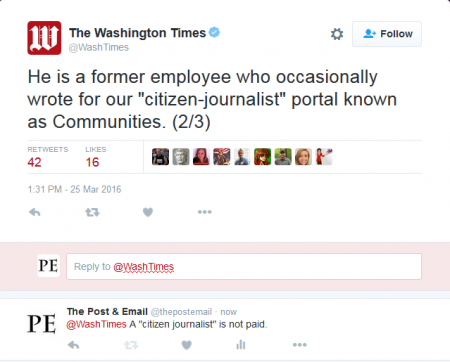 A link to the “Communities” section of the paper leads to columns by a number of well-known writers and political figures.

One commenter in Johnson’s timeline provided a link to The Times’s archive of March 23 showing that Johnson was identified as being in the “staff” category.

Johnson is a Senior Fellow for the Taxpayers Protection Alliance (TPA), “a non-profit non-partisan organization dedicated to educating the public through the research, analysis and dissemination of information on the government’s effects on the economy.”  He has appeared on CNN, Fox News Channel and NPR’s “All Things Considered,” among other programs, and his columns have been published in several other outlets.

Late on Saturday morning, Johnson tweeted that he had enjoyed writing for The Washington Times and offered no criticism of its treatment of him.

Another commenter said to The Times and Johnson, “when you think about it, it’s scary how much power the media has.  We were so in the dark before social media:”

Johnson further tweeted on Saturday, “I look forward to finding a new home for my columns & continuing to advance liberty by exposing gov’t waste, abuse of power & hypocrisy.”

In 2012, Johnson, was fired from The Chattanooga Times Free Press for what he claimed was his exposure of  local government corruption and criticism of Barack Hussein Obama while Obama visited the city.  In an interview explaining the circumstances under which he was terminated, Johnson said:

…the paper got a lot of pushback when I criticized EPB, the Chattanooga Metropolitan Airport Authority, the Chattanooga Area Chamber of Commerce and other shady agencies around town that don’t act in the public’s best interest and aren’t held accountable. When I explained how EPB scammed taxpayers out of hundreds of millions of dollars for the smart grid but was never able to effectively provide the gig and failed to generate any economic benefit from all the money that was spent, EPB pulled its ads from the paper.

I know the paper was frustrated with losing money because I was willing to speak the truth about bad actors in the community. It’s too bad because there is no effective watchdog of those agencies in Chattanooga now. The TV news stations in town will never say anything bad about EPB, the airport authority and other outfits that advertise with them because they don’t want to risk losing ad dollars.

Beginning in 2010, The Post & Email attempted on a number of occasions to share documentation it possesses about Tennessee’s Tenth Judicial District’s systemic public corruption with the CTFP but has never received a response.  In August 2012, the paper did, however, publish a six-day series on corruption within the Tenth Judicial District involving some of the same individuals we identified in our reporting and a brief foray into the complete corruption of Tennessee’s county grand juries.

The CTFP published a report on the sentencing and incarceration of a community whistleblower, Walter Francis Fitzpatrick, III, now serving a three-year sentence as decreed by then-Senior Judge Jon Kerry Blackwood.  During the sentencing hearing, Blackwood declared, “I’m sick and tired of all these people who want to talk about their Constitutional rights.”

Last August, a second Tennessee mainstream media outlet at first said it was “very interested” in the documentation The Post & Email possessed concerning correctional institution and grand jury corruption in the state but stopped communicating with us after we provided the requested documents and answered all of the two reporters’ questions.

In a broadcast segment dated March 8, 2013 by the Fox News Channel, anchor Chris Wallace discussed the 2016 presidential race with veteran political reporter Carl Cameron, who named several potential candidates. When invoking the new U.S. senator from Texas, Ted Cruz, Cameron stated that although a Tea Party favorite making his “Senate debut” and one who would have comparable experience to Obama’s when he sought the office, “Cruz was born in Canada and is constitutionally ineligible.”

Now, however, Fox News is not questioning why Cruz is running for president, and although captured on audio and video by BirtherReport.com at the time, the video of the segment has been disabled.

Article II, Section 1, clause 5 of the U.S. Constitution requires the president and commander-in-chief to be a “natural born Citizen,” which many Americans question as regards Cruz because of his birth in Calgary, Alberta, Canada to a Cuban-citizen father who later took an oath of allegiance to Canada.

Cruz’s mother was born in Delaware and, according to the Cruz campaign, never adopted Canadian citizenship while living in Calgary, roughly between 1968 and 1974.

Cruz has ignored multiple requests from the media and American citizens to release any and all documentation showing that he is a U.S. citizen irrespective of the higher standard of “natural born” required solely for the presidency.

Many in the mainstream media have questioned Cruz’s eligibility but did not question Obama’s in 2007 and 2008 as he ran his first campaign for the White House.  The media continues to ignore the results of a criminal investigation conducted by the Maricopa County Cold Case Posse beginning in September 2011 which found that Obama’s long-form birth certificate, posted on the White House website on April 27 of that year, and his purported Selective Service registration form, are “computer-generated forgeries.”

In 2008, Obama had reported having been born with dual citizenship from the U.S. and Kenya, although at the time of his claimed birth in 1961, Kenyans were still British citizens.  The media did not question his eligibility and silenced anyone who did.

On August 18, 2013, The Dallas Morning News raised whether or not Cruz was constitutionally eligible for the presidency based on his “dual citizenship” but does not appear to have questioned Obama on his.

The lead criminal investigator of Obama’s documents, Mike Zullo, has publicly analyzed Cruz’s responses to the media regarding his eligibility as “disingenuous” and “deceptive.”  Zullo’s research into Cruz’s only proffered documentation, a Canadian birth certificate and his renunciation of Canadian citizenship, has been conducted solely as a private individual.

2 Responses to "Is the Media Protecting Certain Presidential Candidates…"